Werewolf: The Apocalypse – Heart of the Forest Interview – Setting, Themes, Choices, and More

With multiple upcoming games across a number of genres, the World of Darkness universe is looking set to make big waves in gaming over the coming years. One of these games is Werewolf: The Apocalypse – Heart of the Forest, a choice-driven narrative adventure title developed by Different Tales that’s looking to take what works best about the property and expand it into new horizons. We recently sent across our questions about the game to the people behind it, and learned some interesting things in the process. The questions below were answered by Piotr Gnyp, Head of Business Development at publisher Walkabout Games. 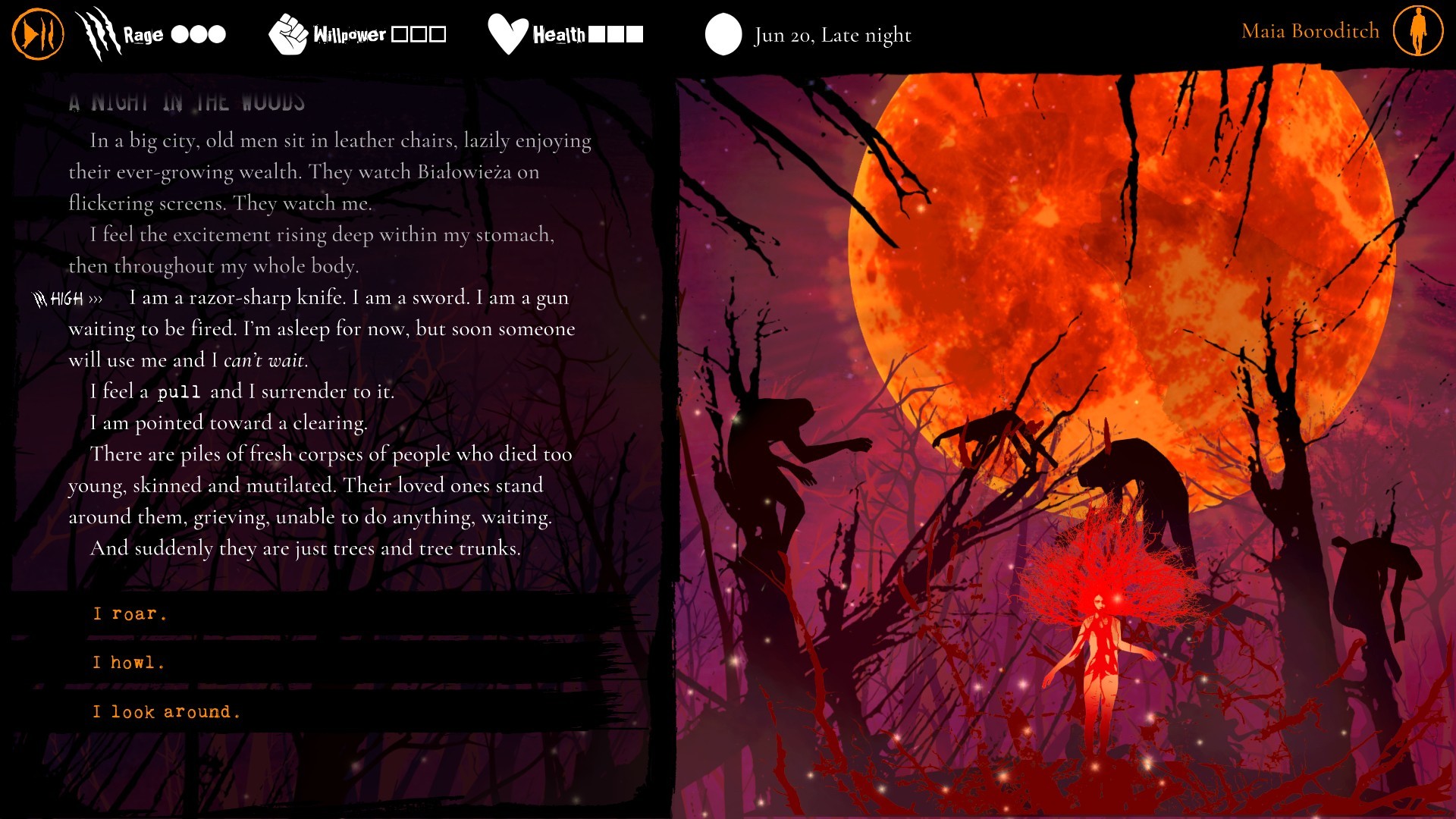 "It was interesting to try and tell something about the Polish-Belarusian borderlands in a game franchise created somewhere else, in a different time, while staying within the scope of Werewolf: The Apocalypse."

The World of Darkness universe has such a rich tapestry of stories and lore to draw from. With Heart of the Forest, what sort of an approach have you taken to telling its story with the balance you want to strike between leaning on past stories and adding your own unique spin to things in the universe?

We wanted to emphasize the ‘World’ in the World of Darkness. The official World of Darkness stories take place in New York or Chicago. We wanted to show that there is much more beyond the American setting, that this is indeed a world, with adventures taking place everywhere, maybe even in your hometown.

It was interesting to try and tell something about the Polish-Belarusian borderlands in a game franchise created somewhere else, in a different time, while staying within the scope of Werewolf: The Apocalypse.

Heart of the Forest’s art style is one of its most striking aspects. Can you talk to us about the process of how you landed on this look for the game and what served as inspirations for it?

We aim for the art to support the narrative in a way that intrigues and attracts the player.

The use of the collage technique, which mixes photography with manual drawing, lets us create artful, moody illustrations that convey the feeling of savage, psychedelic horror. We focus on symbolism and emotions rather than on photo-realistic portrayal of the locations and characters. This will ensure that our screenshots will stand out amongst other projects of the genre.

Together with the narrative and bespoke audio, the art will submerge players in the emotions of the story. All the while, it will leave enough space for the players to imagine and interpret the events and characters in their own way. This way the story becomes a relevant, personal experience that will remain in your memory for a long time.

Our main inspiration is the art of Dave McKean, especially his legendary covers of the Sandman graphic novels. We also studied artists like Elke Trittel and Wangechi Mutu.

First of all, we have the main branching paths, some of which get closed with your choices and lead you through the story. But there’s also another layer to this. At any point, your Rage determines how you see the world. The higher your Rage, the stronger your will to act. You are proactive and able to make more confident decisions. But this prevents you from seeing nuances of the world around you. The options you have become more binary. There’s also your personality, which determines the description of places or objects, and which characters follow you or not. Your relations also can change. Your version of Maia can find herself in different places, with different companions at her side, or see everything in a different way.

The game has multiple endings and it will be really hard to achieve the best one. 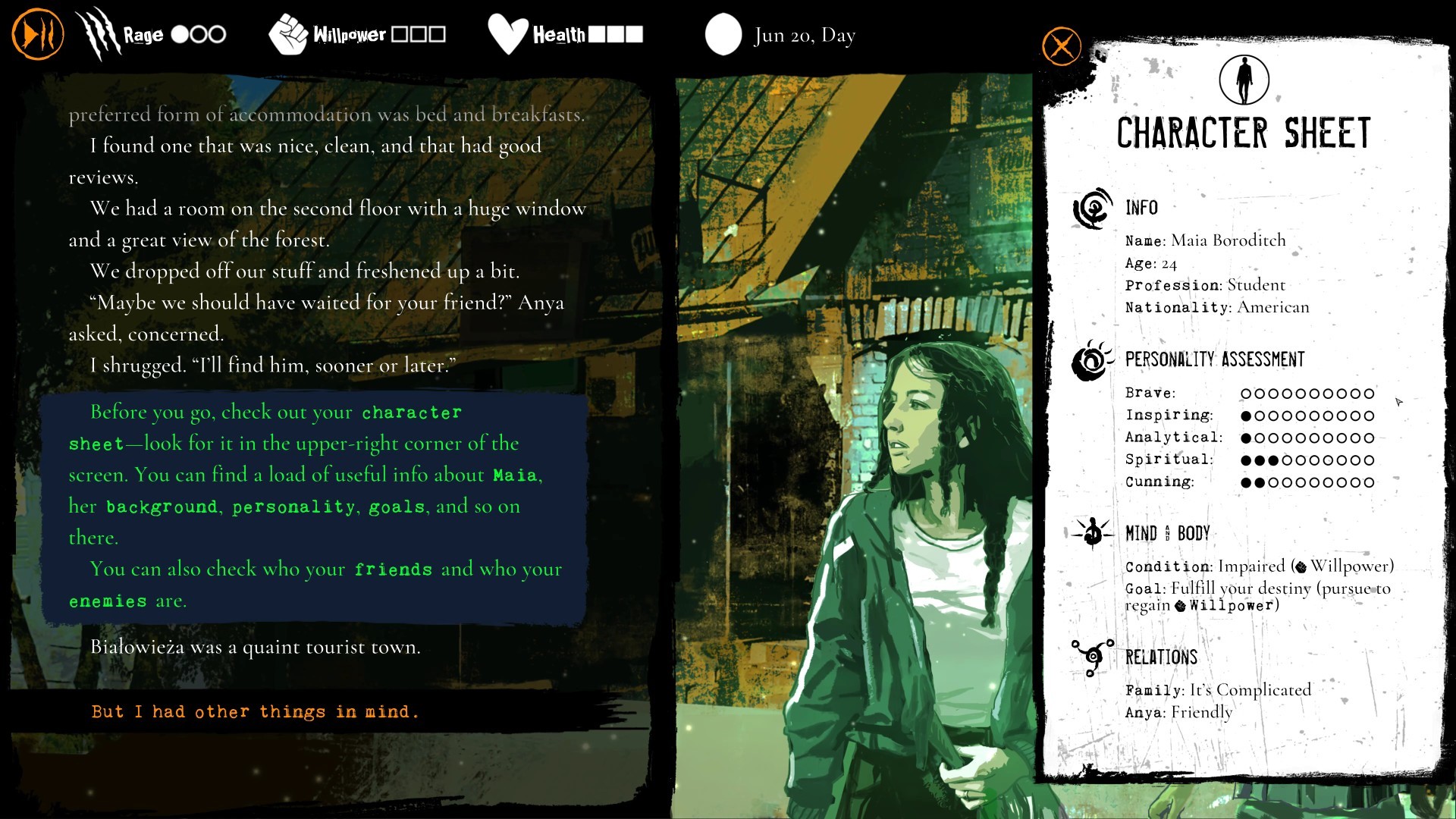 "Ecology is central to the themes of Werewolf, and also it has become an extremely relevant subject. And we do like to make grounded games. Games that touch upon real issues."

Heart of the Forest’s themes, which centre around things such as climate change and ecological disasters, seem particularly pertinent right now. How did you come to decide to tell a story revolving around such themes? Additionally, World of Darkness stories are usually set in the United States, but Heart of the Forest has made the decision to take its story to Poland. Can you talk to us about that and how you landed on that as the setting for your game?

Ecology is central to the themes of Werewolf, and also it has become an extremely relevant subject. And we do like to make grounded games. Games that touch upon real issues.

Since we like to write about what we know, what’s familiar to us, we chose the Bialowieza Forest. A couple of years ago the subject of deforestation was raised. This primordial forest, a.k.a. Puszcza, is a truly unique ecosystem made unique by the fact that, contrary to woods, which are cultivated, Puszcza has been left alone, with dead trees left there to rot and new things growing over them. It’s the primeval cycle of life and death.

This place is a National Park, so, in theory, it’s a protected area. But around it, there are woods that are, ecologically, part of the Puszcza, yet legally aren’t part of the National Park and they started to get logged commercially. There were huge protests, the European Tribunal took notice.

The game is still in production, but I think you can assume 4-5 hours of gameplay, depending on how fast you read and make choices.

Do you have any plans to bring the game to consoles?

Right now we are focusing on the PC release but we would love for our game to be available on as many platforms as possible.