Super Smash Bros. is a franchise that has captured the hearts and minds of Nintendo fans and gamers in general for over 20 years now. With several ultra-successful sequels that include beloved characters from all over different gaming universes and that special Nintendo polish, it’s tough to blame Sony for wanting to cash in on that success with their own version of the 2.5D brawler franchise. And why not? By 2009 the PlayStation catalogue had seen three home consoles, a relatively successful portable system, and tons of highly respected unique characters associated with each one.

Sony also had a small army of excellent developers on their team, and by that same time, the PlayStation 3 had already started to turn its sales around and was actually giving the Xbox 360 some real competition. Plus, with there being so many iterations of Super Smash that seemingly got better and better with each subsequent game, it was an easy format to copy and more than likely looked like a slam dunk on paper. So, what could go wrong? What the hell happened to PlayStation All-Stars Battle Royale? 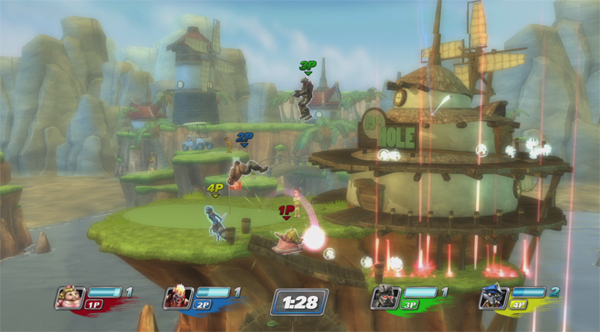 With all of the good will that Sony had built up by 2009 with Uncharted, Sly Cooper, Little Big Planet, inFamous, God of War and various other franchises, some sort of mash-up game was a very logical idea. The kart racing schtick had been done to death by Sega, Nintendo, and a plethora of franchises, though. Even LittleBigPlanet had its own racing game within its own universe. If Sony wanted to put together a mash-up game, it would need to be some sort of fighting game, and what better model to copy than the most successful mash-up game of all time? Super Smash Bros. definitely already had a groundwork laid out. Developer SuperBot Entertainment would just need to take that, and fill in the blanks with Sony’s characters. With this, however, came the games first major problem. Several of PlayStation’s most iconic characters were tied up at other companies.

Most notably Crash Bandicoot and Spyro the Dragon being locked away behind the walls of Activision. It would be crazy to think that Sony didn’t try to get the rights back, at least on a temporary basis, but alas they would not appear in the game to the dismay of, well, everyone who played it. While this might have been a roadblock that any reasonable person could sympathize with, the average gamer doesn’t want to hear about licensing difficulties- they just want to play a good game that accomplishes what it sets out to do. And unfortunately for PlayStation All-Stars, these omissions would not go unnoticed, and would set the game up for a slightly disappointing first impression. Having a PlayStation mash-up game without Crash or Spyro is literally like having a Nintendo one without Mario and Yoshi. Imagine that for a second!

Nevertheless, to make up for the absence of a couple no-brainer characters, Sony did what they could to bring a few slightly more obscure classics out of retirement like PaRappa the Rapper, and Sir Daniel Fortesque. On top of that, to pad out the roster a bit more, some third-party characters (like Heihachi from Tekken) were thrown in. On top of that, the various stages and items would reference even more classic PlayStation gems like Wipeout, Resistance, and Hot Shots Golf.

The loose story of the game would also feature perhaps one of PlayStation’s most obscure characters; Polygon Man, who was briefly the mascot for the original PlayStation before getting booted out in favor of Crash and other characters. This real-life dismissal of Polygon Man created a rather funny and creative reason for him to have a chip on his shoulder and want to start trouble within the PlayStation universe. Those who were old enough to get the reference were likely to get a good laugh out of it. 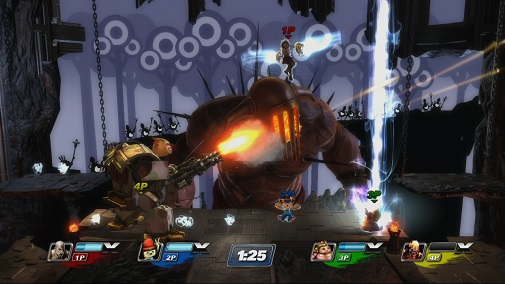 Setting up the game’s world, characters, and backdrops is probably where SuperBot did their best work. With all of these pieces in place as well as they could be, the game was poised to be a rather fun romp and a successful clone of an already extremely popular format. All that was left was the gameplay itself, and this is where SuperBot deviated from the script and perhaps made most of the game’s most fatal errors. In 2012, the game was finally launched, and having a game where Kratos could fight the Fat Princess and Sweet Tooth could fight Sackboy was, by itself, an awesome premise for PlayStation fans, but ultimately the way they would fight would not be quite as fun as many had hoped it would be. The feel and controls of the game were familiar to Smash Bros. in terms of style, but getting a kill on an opponent was totally different.

While normal attacks and combos were all certainly there and fun to do, they wouldn’t ever amount to much. This was not only annoying but also would drive players in the online community to only use characters that could charge up with super bar quicker, and only use moves that facilitated that style.

Additionally, the game itself just didn’t have that much content when compared to the franchise it was so obviously imitating. Outside of an arcade story-mode for each character that almost gave the player nothing unique to see outside of a couple of cutscenes, there wasn’t much reason to explore the offline gameplay once it was generally understood. It also didn’t help that having characters from silly games and characters from serious games just didn’t look quite right for PlayStation All-Stars. Not to say that a mash-up with such wildly different art styles couldn’t be done, but perhaps the party brawler genre wasn’t the right choice for that. Perhaps a more traditional, and slightly more mature fighting game modeled after Tekken or Street Fighter would have provided more of a suitable platform for an ominous Helghast Colonel to shoot Nathan Drake in the face.

To add insult to injury, the game wasn’t supported very well after launch. Eventually Kat from Gravity Rush and Emmett from Starhawk would be added to the roster via DLC, but that wasn’t nearly enough to make up for the lack of content and gameplay roadblocks that plagued the experience.

To say that PlayStation All-Stars Battle Royale had nothing going for it would be ridiculous. It’s full of PlayStation nostalgia, thoughtful references, and a fairly decent roster all things considered. The majority of its problems boil down to two basic fundamental mistakes: One, the game wasn’t executed as it should have been. It largely stuck too closely to Smash Bros. script when it should have deviated, and deviated when it should have stuck to the script, and the other main issue is that, aside from everything else, the hardcore PlayStation audience is not the same as the hardcore Nintendo audience.

You can’t just take a Nintendo game and plug in PlayStation characters and expect it to land the same way. While there is certainly some cross pollination between the two platforms, PlayStation’s hardcore audience is generally a little older and has a bit more of an inclination to play games with more mature and complex themes than the typical Nintendo gamer. There’s nothing wrong with either, but the fact that they are undeniably different made the very conception of Battle Royale a mistake from the get-go and set the game up to struggle and end with the whimper that it did when the servers were shut down in January of 2019. Perhaps with the huge success of the PlayStation 4 we could see Sony give the idea of a mash-up game another try, but it would have to be after a long, hard look at its audience and what they are likely to want out of it.