It’s almost time folks. E3’s less than twenty four hours away, at the time of this article going live, and the excitement is palpable.  This year’s E3 is looking to be the best ever yet – the run in seems to be afloat with rumors, that range from the genuinely believable, to the mildly incredulous, to the outright impossible, with everything from a new Grand Theft Auto and Star Fox game to the revival of retro favorites such as Road Rash and Killer Instinct, along with the reveal of Half Life: Episode 3, having been discussed as being revealed this E3. However, even without all the mad rumors, there’s a lot of stuff that is definitely confirmed to make an appearance at the conferences that is exciting. Sony’s NGP, for example, their new super powerful handheld that will join Nintendo’s 3DS in the newest round of the handheld wars. Nintendo, on the other hand, is unveiling their newest console, rumored to be codenamed Project Café, which will mark their foray into HD gaming. As if that wasn’t exciting enough, the Café will reportedly also be more powerful than any other console till date, be supported extensively by third parties, have a traditional controller (although with the usual Nintendo twist), have a robust online service, and will mark the return of several Nintendo franchises long given up as dead. That sounds too good to be true.

On the games front, we know stuff like Gears of War 3, RAGE, Uncharted 3: Drake’s Deception, The Elder Scrolls V: Skyrim, Mass Effect 3, Battlefield 3 and The Legend of Zelda: Skyward Sword will all be making an appearance. In addition, we know we can count on some surprises from Sony and Nintendo (Nintendo more than Sony, since there are bound to be some unexpected titles on their new console), and Microsoft for the Kinect, if you’re into that sort of thing.

It all sounds exciting, doesn’t it? You’d be right if you answered with a yes: E3 is probably the best time to be a gamer, and it is a time when all of us come together regardless of our fanboy alliances to celebrate the advancement of gaming together-

No, wait. That’s not what we do at all. Actually, we gamers somehow manage to reduce what is merely a series of media briefings followed by a grand convention to a competition, somehow declaring a ‘winner’ every year out of the three platform holders. Huh, it’s weird, but we’re gamers, all we do is compete, whether against the computer or against each other, so what do you expect?

So, what with me being two things: a gamer, and a true blue Nintendo fanboy – I hereby present to you my list of reasons/rumors/whatever that will definitely win Nintendo this E3. Mind you, if everything I write here happens, it might be too awesome to be contained within one universe, setting off a chain of events that shall ultimately end in a cataclysmic doomsday on the 21st of December, 2012. 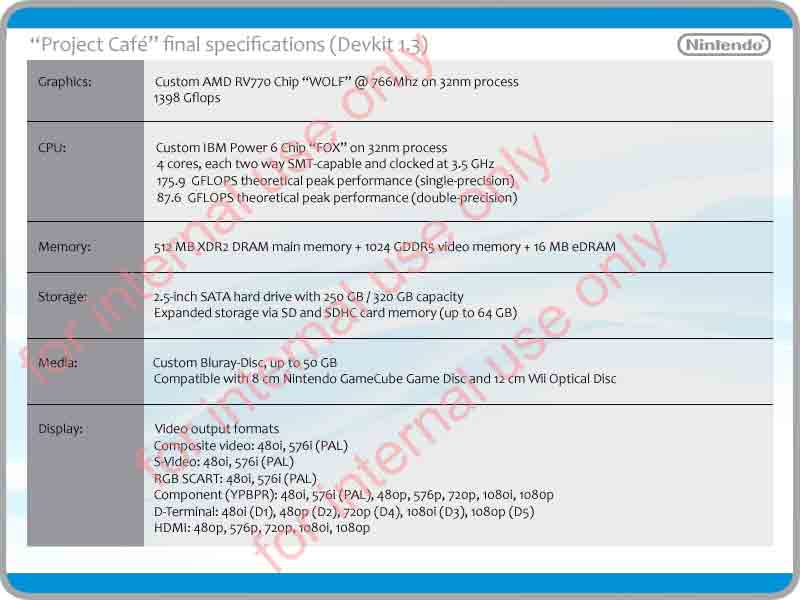 If Nintendo gets the specs right, the Cafe could legitimately steal away a lot of wind from Microsoft and Sony's sails

Okay, so there are five things Project Café needs to do to be an uncontestable success, one of which is assured. It needs to have great first party games; it needs to have proper third party support and all the multiplats that will be released, as well as some exclusives if it can get those; it needs to have a robust online service, at least on par with PSN (albeit without the entire ‘your credit card data has been stolen’ part); it needs a proper, traditional controller, with two analog sticks, four face buttons, and four shoulder buttons; and most of all, it needs to outpower current generation consoles if it wants to be taken seriously, and remain relevant.

So, the one thing that, above all else, would win Nintendo this E3 would be an exciting reveal for their new console? A proper controller, HD capabilities, on par online, assured third party support… now that would be the ultimate console, wouldn’t it? With all the third party multiplats and exclusives, in addition to the incredible first party backing of Nintendo exclusives, that are arguably without equal?

The ball is in Nintendo’s court, and they’re in the perfect position to perform a coup de ètat. They just need to play their cards right. All the pieces need to fall into place. Everything needs to go right, and that is something that hasn’t happened for Nintendo since 1996.

Still, it’s high time it happened now. If it did… well, that’s an easy E3 victory for Nintendo.