2007 came three years ago, and brought with it one of the best shooters ever released on the PC- Crytek’s Crysis, the game that, one could say, “redeemed” EA in a time when everything was going wrong for the firm. And, yes, it was good enough to do that. With mind blowing, spectacular, brilliant, awesome (and every other synonym for “good”) graphics as the game’s USP, Crysis wowed us all with its technical prowess. But that’s not to say it played badly- no, it had an exciting, fast paced gameplay that thrilled every moment of the campaign, and boasted of a thousand other pros that supported the overall, simply awesome experience of the game.
With the success and acclaim that Crysis garnered, EA was sure to ask Crytek to work on a sequel- and viola, we have Crysis 2, ready for release in a few months’ time. There have been many reports about the game being less powerful graphically than the original Crysis and the recent delay of the game must have seeded the seeds of doubt in some minds. Also, the fact that the game will also be released on both the High Def home consoles means it will definitely be toned down in terms of technical prowess.
Does that mean we will have a less meaty and more disappointing sequel than what we expect? Will Crysis 2 live up to its predecessor, and deliver an experience of excellence and quality? Let us have a look at Crysis 2 and see if it will be bang worth the buck, or just a rental, or maybe not even that.

How Does Crysis 2 Hold Up Graphically?

Okay, maybe not better than real life, but it still looked smashing. For a game that was released in 2007, when HD consoles were still somewhat new to the market, Crysis still looks brilliant, and only a select few games have been able to match its sheer beauty. Yes, it does have a few glitches, as shown in 4:50 in the video above, but still, few games can hope to have as good visuals as Crytek’s masterpiece does.
But enough about Crysis. This is an article on Crysis 2. And here’s the question- will Crysis 2 have as good graphics as Crysis had? Will it manage to strike us as hardly as its forefather did 3 years back? See the video below first.

That video has “splendid” written all over it in bold, italics, underlined capitalized letters. The attention paid to detail- little things like reflections in the water, rubble and ruined pieces of stones that were part of great structures once, particles floating in the air, the facial animations of even the most insignificant characters- is simply wonderful, and it is clear that a lot of hard work and thoughtful sleepless nights for the graphics team have been put into making Crysis 2 the beautiful game that it is.
But these days, games with stunning graphics are no big deal. Titles like Uncharted 2, Killzone 2 and so on have come and gone and have wowed us with their marvelous, detailed visuals. How can Crysis 2 make its mark visually like Crysis did? How can it hope to rise over all these new graphical biggies? Games with superior animations, awesome textures and wonderfully detailed graphics have become the meat of the High Definition home consoles these days. Can Crysis 2 retain the sci-fi shooter trilogy’s crown of the graphics king?
Other games, like Killzone 3, promise to look great as well, and Killzone 2 demonstrated that the franchise should not be taken lightly in the visuals department. See how Crysis 2 holds up against Killzone 3.

Both are awesome looking games, but we can give both of them the benefit of doubt (depending on which of them is the winner here), saying that they are still in development. They are yet due for release, so these are still somewhat early images. But still, Crysis 2 does manage to hold up against KZ3, and quite convincingly. Some can even say it looked better for most of the part. But that doesn’t mean Crysis 2 has a sure shot at becoming what Crysis became when it was released.
It might have a shot if it has better graphics than the original Crysis, but recent reports, as mentioned above, have shown that Crysis 2 requires less powers from a PC as compared to Crysis, and being a multiplatform, it obviously might be toned down do that it can run smoothly on all three systems.
Will it be better than than the first Crysis visually? Let’s see if it will be in our next segment.

Please click the image to see it in a pop up and use back-next button to navigate through them. 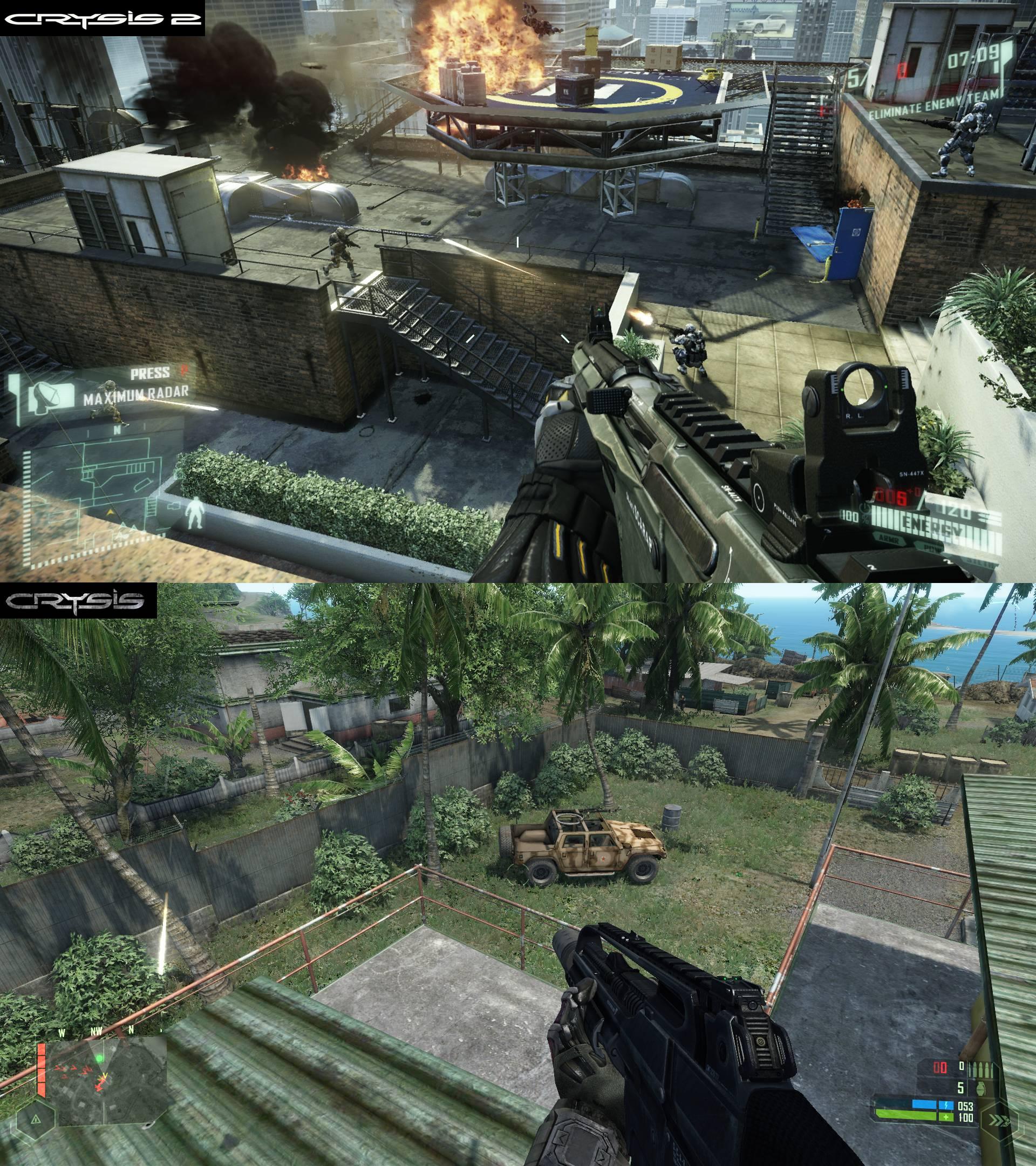 Now, that is a close one, and there is not actually any clear winner, from what I can see with my glasses on (don’t ask me to get glasses if you disagree).  Is that a testament to how wondrous Crysis looks even now, 3 years after its release? Definitely. Does that mean Crysis 2 will not be the wielder of the graphics crown? Well, yeah. Tell us what you think of this comparision, and which you think is the better looking game.
Have a look at some more comparisons to see how good Crysis 2 looks when pitted against a few other good looking games from recent memory.
Halo: Reach vs Killzone 2 vs Crysis 2
Crysis 2 vs Killzone 2