Due to the complete absence of E3 in both digital and physical forms, 2022 hasn’t been the kindest to game reveals that would make someone jump from their seats. That said, other conventions like Summer Games Fest and Gamescom have shed some much-needed light on a bunch of amazing games that fans can look forward to in the near future. One such game is Where Winds Meet, which is easily one of the most unique and exciting games that were present on the show floor this year.

Currently in development at the China-based Everstone Studio, Where Winds Meet finds itself standing alongside other highly-anticipated Chinese RPGs such as Black Myth: Wukong and Faith of Danschant: Hereafter. But let’s not get ahead of ourselves here, and let’s dissect everything that we saw during Where Winds Meet’s reveal trailer and how its many inspirations and mechanics come together to make this game seemingly one hell of an experience.

Where Winds Meet is set against the backdrop of the Northern Song period of Chinese history, which puts the game’s timeline somewhere around 10th Century C.E. Those familiar with the land’s history would know that this was a time of great war and conflict as the Northern Song dynasty aggressively expanded its kingdom to new horizons. Coming back to Where Winds Meet, the game will follow the adventures of a seemingly lone swordsman as he embarks on a lengthy quest of self-discovery in this age of conflict. Will you be a master swordsman that uses everything in their power to crush any and all opposition, or will you uphold a moral code of conduct and try to bring peace and justice to this land?

Apart from the historical aspect of the time period, Where Winds Meet also seems to be adding supernatural elements into the mix. Since the trailer’s voice acting is in Chinese with no English subtitles, it’s really hard to deduce what’s going on. But with so many excellently choreographed cutscenes and the sheer visual variety on display, the game’s story is definitely looking to be an enchanting one and we can’t wait to know more about this aspect of the experience.

Over on the gameplay end of things, Where Winds Meet seems to be a potent mix of mechanics found in Ghost of Tsushima. Where Winds Meet will feature an open-world where villages and other points of interests will be separated by swaths of forests and flower fields which will house plenty of opportunities for exploration and side-activities like fishing and hunting. The trailer showcased villages as hubs for activities such as trading and tipping people to get information about potential side activities which works in a similar vein to Red Dead Redemption 2.

We also saw that you can pick fights with other people in these areas, which means that there might be enemy factions residing in these areas. The player character is a nimble one, and will have plenty of mobility options from being able to quickly scale up obstacles to running on rooftops and other surfaces such as walls. Hell, we even saw the player character walk on water and I’m all here for it. 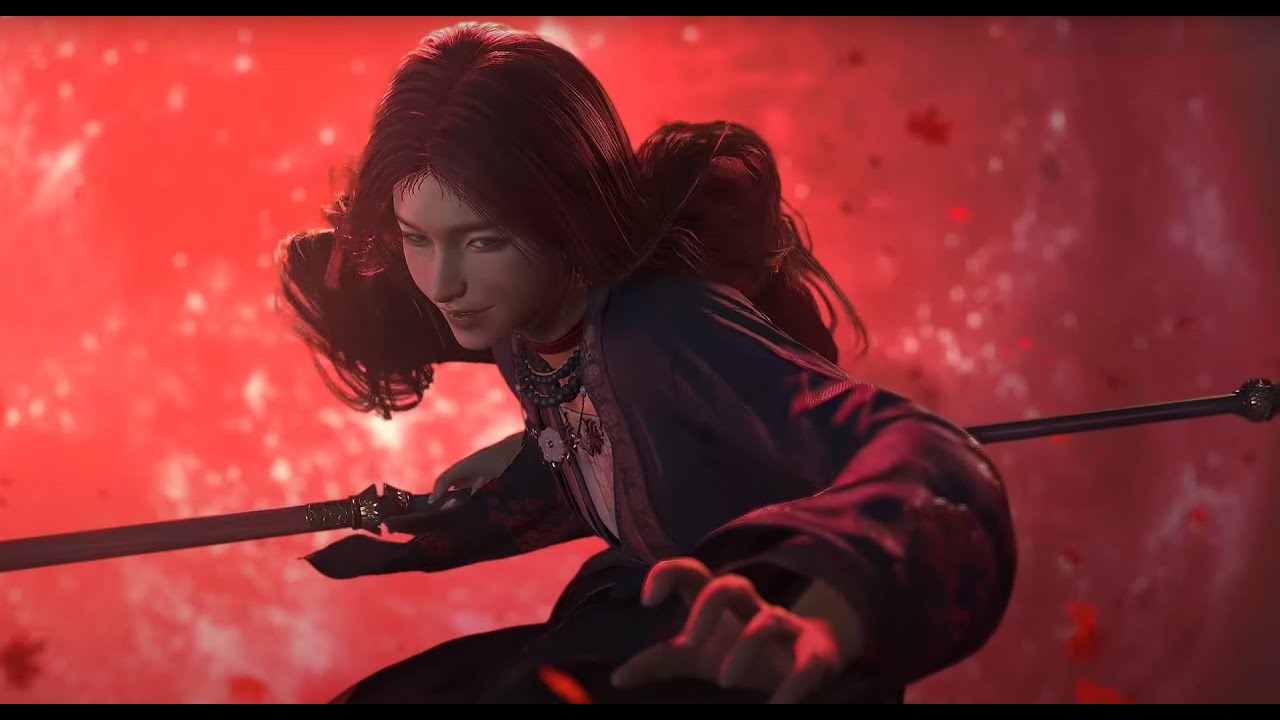 And this leads us nicely into the meat of the experience – the combat system. Everstone Studio has stated Wuxai arts as a major source of inspiration for the combat system, and these influences are immediately apparent with every flashy move the character makes in the short trailer. There’s a lot of variety in how you approach the combat scenarios, ranging from stealth to all-out guns blazing to anything in between. To support these playstyles, Where Winds Meet features a plethora of varied and flashy moves that can be chained together to incredible effect.

During the village fight, we see a selection wheel that lets you choose from a variety of abilities such as convergence, radiance, energy pool, among others. Apart from these abilities, you will have access to a ton of different weapons that range from greatswords to bows to scythes and others – allowing you to have a lot of flexibility in how you go about slashing your enemies. We see the character taking shots at a distance with a bow, blazing enemies on fire, and also slash through gargantuan beasts and bosses with greatswords. All in all, the game seems to have a lot going on in the combat department and we can’t wait to experience it in all its glory.

While crafting and customization haven’t been shown off in the trailer, the developer is promising over 600 gear pieces that can be used to deck out your character in a wide variety of ways. We also saw some survival elements in the gameplay, with one particular instance showcasing decreased character stats due to malnutrition or poor training. 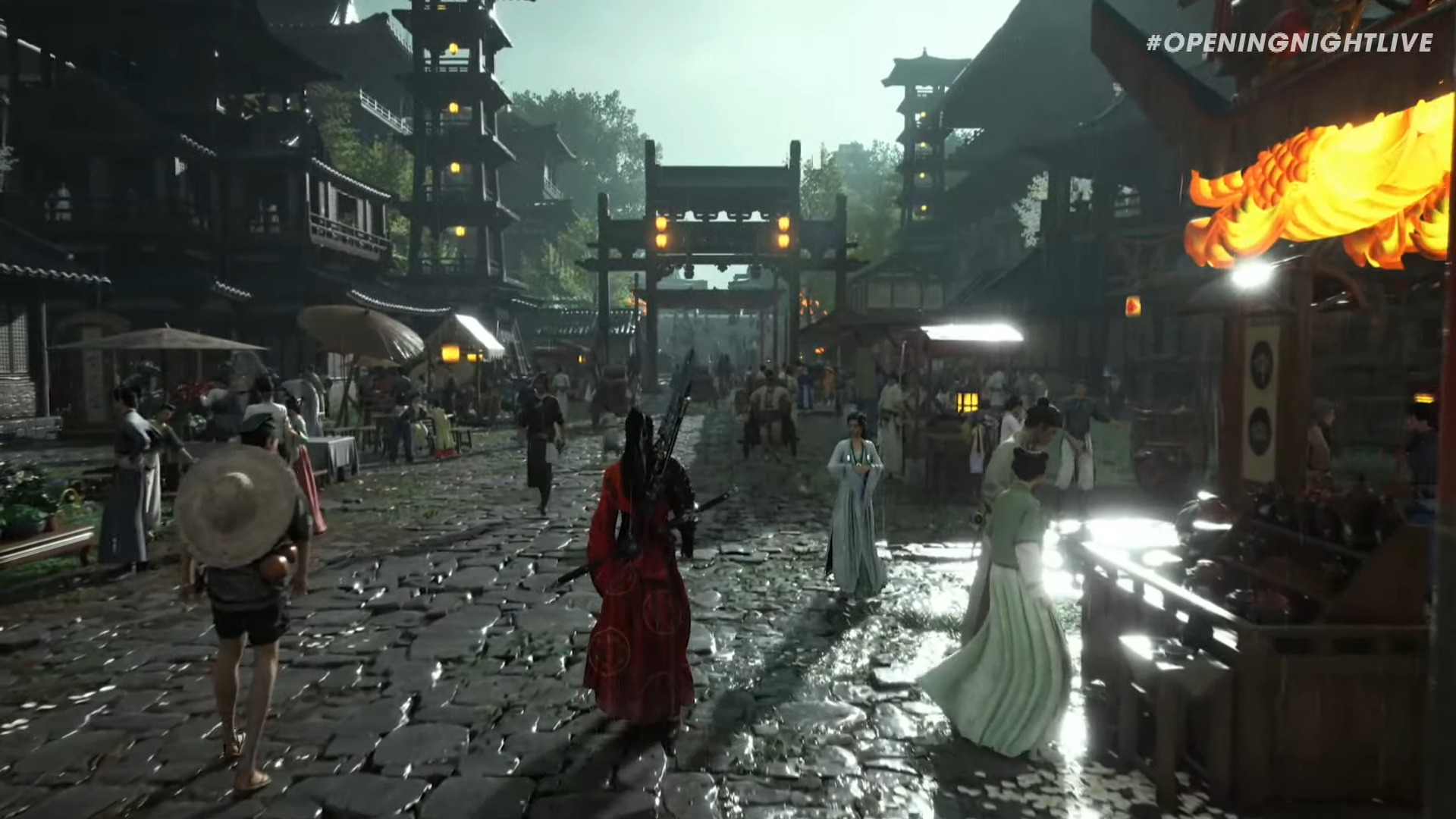 The presentation is also top-notch, both on a technical and design level. The environments and character models themselves are built using high-quality materials, and the lighting and reflections also seem superb – which culminates in a crisp and pristine look all around. Of course, the art direction is also equally great, and the game’s many outdoor environments boast a sense of grandeur as they masterfully mix mythological elements with true-to-life history. That said, you can easily see that the animations are a bit choppy which feels rather cartoony against these realistic worlds so that might need some ironing out prior to release. The sound design also seems appropriate and consistent with the themes and the time period of the game, and the poem at the start of the trailer which apparently holds some historical value as well, also sounds really good.

Finally coming to the topic of release, Everstone hasn’t really stated anything about when Where Winds Meet will be releasing which isn’t all that surprising since this is the very first look that we have had of the game. That said, a recent press release has revealed that the developer is planning to conduct a beta test by the end of the year. While we don’t know whether that would be an open beta or a closed one, it seems fair to assume that the game would release sometime around 2023 or 2024 by latest. Of course, that’s just an assumption, and until the developer shares more information on the matter – it’s best to keep expectations in check. As for the platforms, Everstone Studio is targeting a PC only release – but it seems fair to assume that the game might release for consoles later on like the case with Sword and Fairy 7.

In conclusion, Where Winds Meet is shaping up to be a great action RPG with a variety of elements (some original and others inspired by contemporaries) all of which culminates in a well-rounded experience and we can’t wait to dive into this one hell of a game whenever it launches. Fingers crossed until then.