Why the Hell Has There Never Been a Truly Great Rambo Game?

A look back at the sorry history of Rambo in video games.

With very few exceptions, the last word in action films of the 80’s was generally Rambo. This made sense as the ultra-muscular look was definitely in at the time, which was partially popularized by Stallone and Schwarzenegger anyway. That said, the movies those guys were putting out were fantastically successful and with that came the brilliant idea of putting those iconic intellectual properties to the test in the video game medium. This would lead to a slew of games for the next several decades, all of which tried to recreate the magic of their films on which they were based, but only a surprising few would succeed.

One of those few was the first Rambo game in 1985 for the ZX Spectrum and Commodore 64. The game was a fairly standard top-down shooter, which was a genre that was by no means invented in 1985, but the fact that it played well, was based on the most recent second film, and incorporated some melodies from that movie’s soundtrack all help it get enough attention – and enough praise – for it to thrive and ultimately get the attention of Sega, who would publish a new version on their more popular console, the Sega Master System. However, it wasn’t actually a Rambo game at first. This was actually a totally different game, but Sega reworked it to be a Rambo game for the West. It was changed a third time for PAL regions, too. So, by the time this game came out it was received as totally different experiences in Sega’s three most prominent markets. But despite that, all three versions were reasonably well liked as it was still a great example of that trusty run-and-gun format that was pretty popular at the time. This trend of Rambo games would go on for quite some time but eventually come to a hideous conclusion for the series that leaves it in the dormancy that it’s currently in. But what could have possibly happened to stop an IP like Rambo? One so tailor-made for video games? What the hell happened to Rambo games?

It wouldn’t be long after the obvious and unavoidable success of Sega’s Rambo game until Nintendo decided they wanted in on the action with their own. However, they would take a totally different approach. Given the popularity of games like Contra and other side-scrollers, developer Pack-in-video would make this Rambo game a side-scrolling action game with light platforming and some exploration thrown in, making it somewhat ahead of its time as the vast majority of games like this were generally extremely linear at the time. This game would also be based on the second film, but would still go its own way from the previous two versions in just about every other aspect. These decisions would prove to be fruitful ones, as the game went on to review and sell fairly well on Nintendo’s premier console. That said, the console was soon flooded with similar games that would drown Rambo out fairly quickly.

No matter though, seeing that Ocean Software was already hard at work on Rambo 3 for the Mega Drive, Master System, Amiga, and a whole host of other platforms that would take advantage of newer, emerging technology, especially on the Mega Drive and Genesis. Sega and Taito would both work together to see about 10 different versions of game released and that they were all up to snuff. While that was accomplished, some of the versions for lesser-known consoles like the Amiga and ZX spectrum would have significantly less content than their 16-bit counterparts. The Genesis/Mega Drive versions as well as the arcade version would be the definitive ways to play the game and feature a range of objectives; from simply finding the level’s exit, to eliminating all enemies, to rescuing captured soldiers, Rambo 3 has a good sense of pacing and variety that made it a pretty great game for its time.

Despite the success and wide reach of Rambo 3, it would be almost 20 years before another video game was made from the IP for the arcades. This would be a pretty straight-up rail shooter that would feature nice graphics for 2008 arcades, and a nice controller that you would use to take out enemies as they popped in and out of the 62-inch screen. Given that arcade gaming was well past its prime in 2008, its impact on the gaming medium could only be so big though. 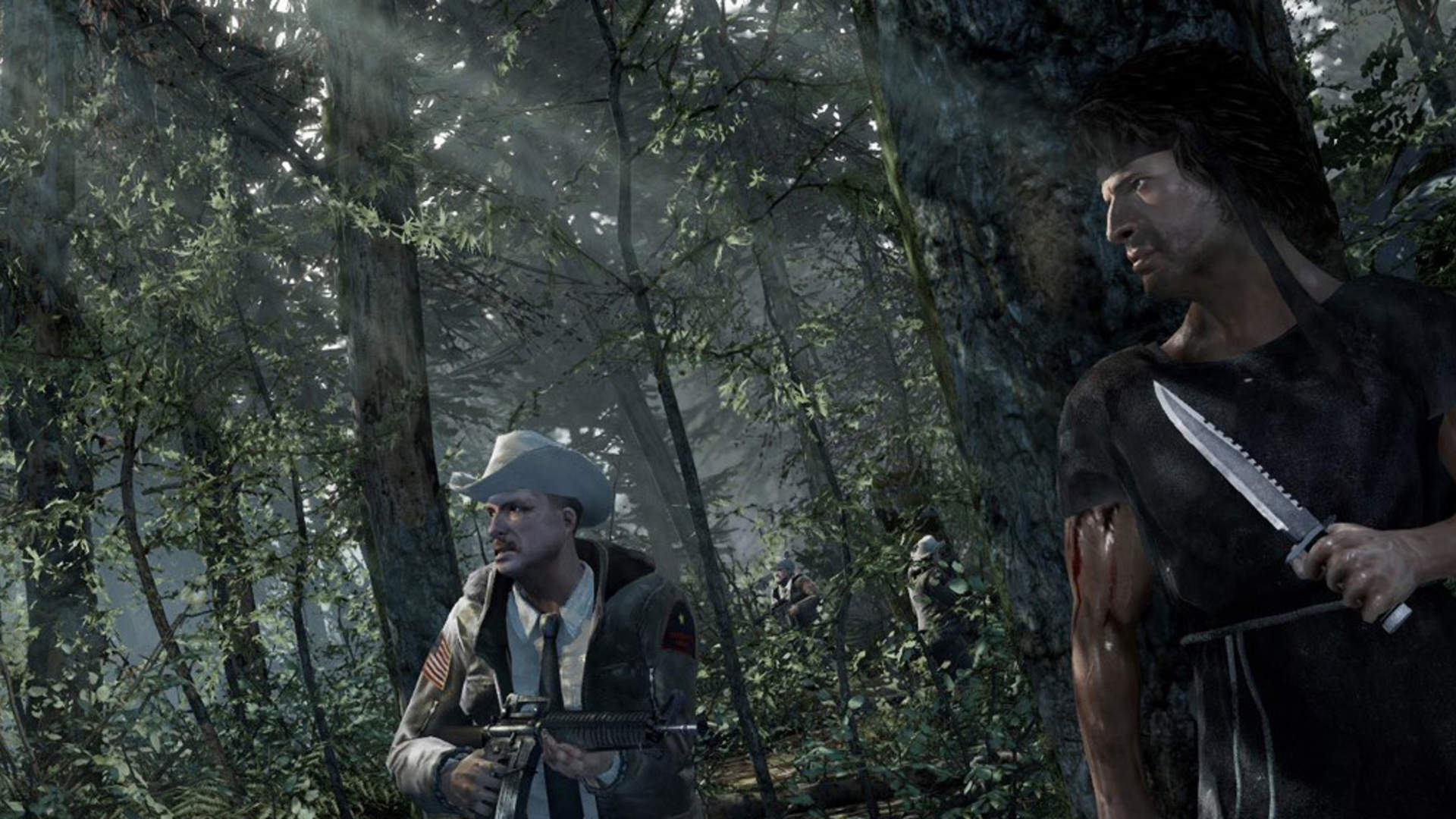 Still, it seemed Rambo wasn’t quite done with the rail shooter genre as “Rambo: The Video Game” would launch in 2014 on Windows, PS3, and the Xbox 360. In an unprecedented fall from grace for the franchise, this game would fair rather poorly among critics and gamers alike. A heavily-inflated number of quick-time events, archaic graphics, and a very simplistic rail shooter style that had been out of style for consoles for a long time all lead this game to a pretty universally negative impression among the community – propelling it to meme status in some circles. The game was bland when it needed to be interesting most, and just felt like something that wouldn’t have been fun even 10 years prior to its launch. While developer Teyon has somewhat redeemed themselves with Terminator: Resistance and Monster Truck Championship – which are at least competent games – there is no other way to slice it. 2014’s Rambo: The Video Game was indeed a disaster for the IP. So much so, that there has not been even a whisper of a new game since, and it’s been almost seven years now.

Since then, the film franchise has seemingly closed its doors with “The Last Blood” looking to be the last one. But that doesn’t necessarily mean the franchise has to be over with video games, which is the great thing about them. Hell, by this point, you could probably put together a full game with voice acting by just using sound bites from the movies if necessary, but that would require a bit of a rebranding effort on the part of whoever ends up in charge of the game and I can’t blame anybody for not wanting to take that challenge on – especially with the 2014 game continuing to live on in infamy as it still does. That said, the franchise is still absolutely perfect for games. Whether it be a first-person shooter, or anything else, all the elements are there. Tons of weapons, endless enemies to face off against, and an open-door to every action movie cliche you can think of as a playable level and it would all make sense in the world of Rambo. While it may still be quite a while before anybody is ever truly willing to take that challenge on, the truth still remains that there is absolutely a great game waiting to be made in that franchise somewhere. All it needs is for somebody willing to dig it out.