THIS COMPETITION HAS NOW CLOSED.

Sometimes you don’t want to obey the rules of the road. Sometimes, you couldn’t care less about lap times or racing lines. It’s time like this when you need DiRT: Showdown! This frantic, devastating arcade racer from developers Codemasters is the perfect title for multiplayer party gaming, vehicular destruction and no-holds-barred racing.

Better still, we’ve teamed up with one of the world’s largest online action sports clothing stores, FreestyleXtreme so you can be in with a chance of experiencing the wanton destruction for yourselves! 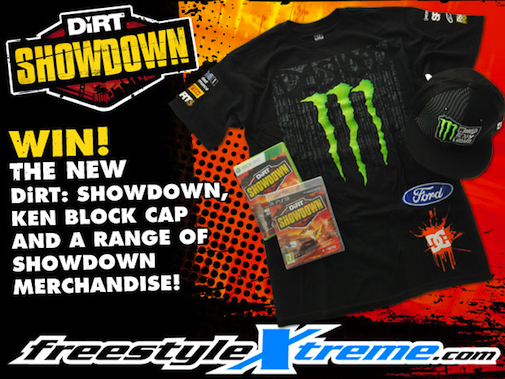 To be in with a chance of winning a copy of DiRT: Showdown for PS3 or 360, A Ken Block/DC Shoes baseball cap and a DiRT: Showdown sticker, simply answer the following question:

DiRT: Showdown is a spin-off from a franchise originally known as?

Post your answer in the comments below by midday on Friday 29 June to be in with a chance of winning. UK residents only.