For those who have lived under a rock for the past decade, Worms and its many variations have been around on the PC and various platforms for quite some time.  Upon hearing the game’s premise, you might think “that sounds retarded.” After all, worms attacking each other with rocket launchers, grenades, exploding sheep, and steel donkeys sounds…. odd. Odd is exactly what Worms is, and it’s just that that makes Worms an instant classic. 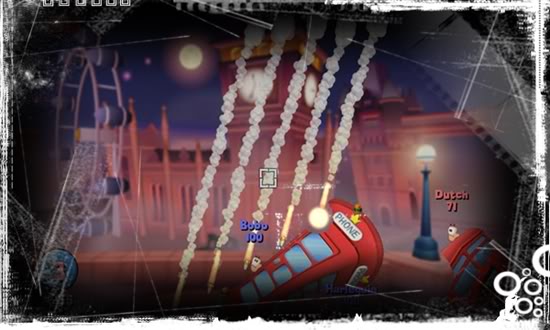 The formula is simple – pick a weapon, point it at an enemy worm, and see what kind of devastation you can unleash.  The weapons and terrain in each level are varied just enough to make the game have quite a bit of strategy involved.  Should you use the stick of dynamite to finish off your opponent, or is he close enough to the edge of the cliff to knock him off with a baseball bat?  These are the questions you’ll be asking yourself while playing this game.

The real question though, is whether or not this game is fun.  The answer is yes, but moreso when played with friends.  This is the type game that is considerably more fun when the person’s worm you are blowing up is sitting right next to you, so you can laugh at them when their worm is blown to oblivion.  The controls are simple enough that just about anyone can pick up the controller and play.  Furthermore, the turn-based pacing is just right for people new to gaming not to be intimidated or overwhelmed.  On the flip side, there’s enough strategy involved that a savvy gamer will certainly hold his or her own when playing newcomers. 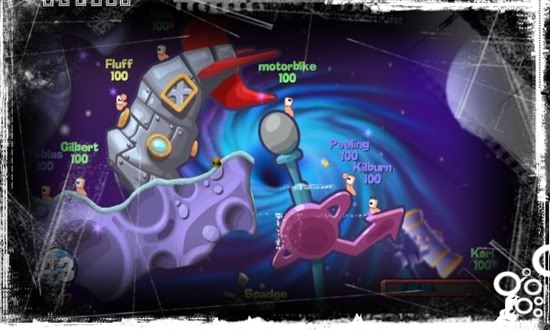 The graphics and sound effects are cartoonish in style, which is what the game was intended to be.  There’s nothing flashy here, but that’s okay.  An area in the game that could’ve used some attention is the single player modes.  There is a tutorial and 20 single player challenges, but other than that there really isn’t much of a reason to play this game alone.  The computer can present somewhat of a challenge, but it’s not a challenge that’s all that fun.  If you’re going to play Worms, playing multi-player is the only way to go.  If you’re friendless, you aren’t completely out of luck because there’s an online multi-player mode that can be pretty fun, so long as there are people online to play. Worms has seemingly been around forever, but it’s a tried and true formula that really doesn’t get old.  It’s a welcome addition to the Playstation Store.  For simple, addicting, multi-player action; look no further.

Oddly entertaining, Fun multiplayer action, So easy a caveman (or a girlfriend) can do it

Not a lot of depth, Single player gets old fast

Final Verdict:
GOOD
Worms is fun, simple, and addicting - a welcome addition to the Playstation Store.
A copy of this game was provided by Developer/Publisher/Distributor/PR Agency for review purposes. Click here to know more about our Reviews Policy.