Posted By Rashid Sayed | On 14th, Mar. 2011 Under News | Follow This Author @GamingBoltTweet

Talk about misleading advertisements.  Today, Australian users of Youtube saw an advertisement which was not only misleading but scary at the same time.  Apparently this advertisement showed Hilary Clinton  with sub titles like: “Breaking News, North Korea Attacks”. Now considering the fact that Youtube itself has a breaking news section many users took this for an actual news. After realizing it was nothing but an advertisment, users got pissed with the following comments:

“Almost freaked out at the YouTube homepage banner ad for Homefront, thinking it was a real headline on a North Korean attack. Not cool.”

“I find the front page advertisement for “HomeFront” on Youtube to be offensive. I thought North Korea had actually attacked. Misleading.”

“not sure if the ‘North Korea Attacks’ Youtube banner ad for #Homefront is the most tasteful use of advertising i’ve ever seen.”

We can all understand the agressions of these Youtube users as you can clearly see how attractive the banner was. 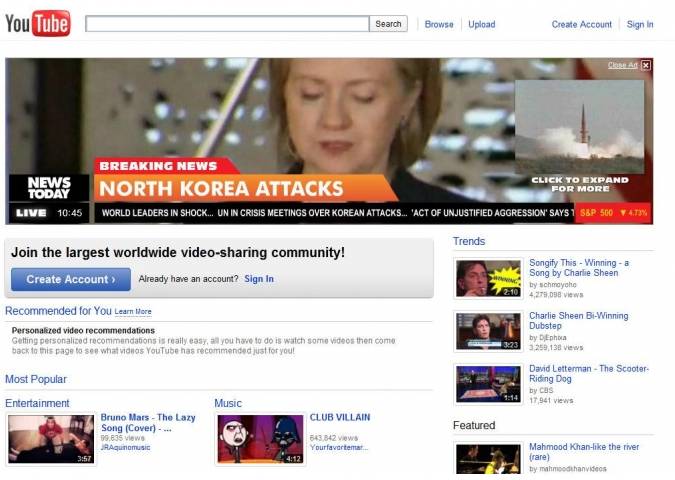 And the related trailer was this:

I also find it a bit comical and it will be interesting to know whether there was a permission taken from Hilary Clinton.

What do you guys think about the entire incident? Let us know in the comments below.