Wrestling games in the past have either veered on the sublime or ridiculous – much like the television shows. A fighting title is only as good as its myriad moves and combos, the catalogue of varied fighters and the presentation. WWE 12 promised to fix some of the bugbears of recent games, with improved grappling, better finishing moves and a graphical overhaul. The latest edition is much more than an updated game with plenty of innovations. 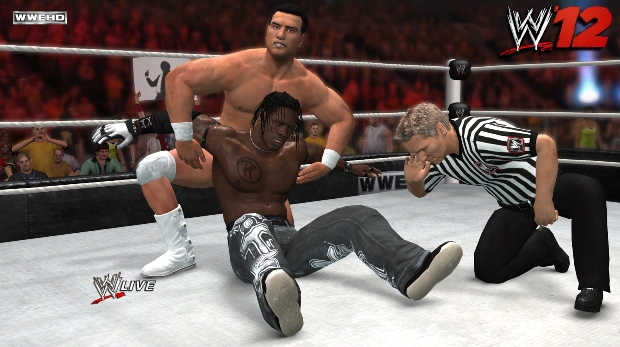 Yet another wrestling game… but this one has some fresh ideas

There are various game options accessible from the main menu…  one on one fights, two on two, triple threat, fatal 4 way, 6 man, handicap and, of course, the Road to WrestleMania mode. What’s more, you can determine the styles and rules too: Extreme Rules, Hell in a Cell, Inferno matches, Iron Man, Ladder and Last Man Standing to name a few. As you’d expect, the customization options are also suitably extensive, allowing you to create your own Superstars, entrances, finishing moves, storylines and arenas.

As you’d expect the presentation is superb. From the razzmatazz of each fighter’s grand entrance, with fireworks and lighting effects, booming music and the raucous crowd, it feels just like the “real” thing. There are loads of fan favourites available from the start (both Superstars and Divas) with additional stars available though downloadable content. 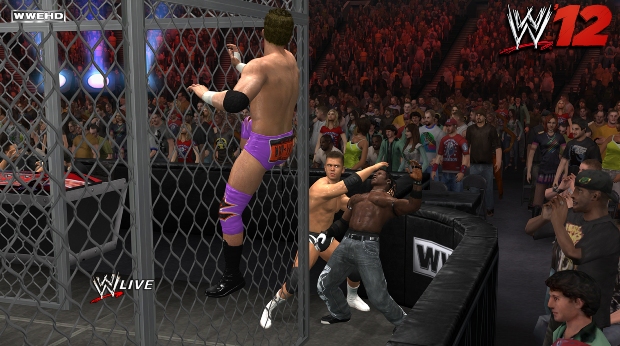 There are loads of game modes to keep you busy

What struck me from the very start was the decent AI, which really does seem to react to your gameplay. Pull the same moves over and over and the computer-controlled characters seemingly start to get wise to your tactics and shake things up a bit.

The controls have indeed been revitalised and it’s easier to grapple, strike and throw than in previous games. Despite this, it can still be fairly tricky for a novice to dive straight into a game and compete as there are so many moves and techniques to factor in. My Road to WrestleMania escapades were dampened somewhat in my first few attempts as I was unable to even conquer my first opponent. No matter how much damage I inflicted, a failed counter on my part and a few retaliatory throws left me unconscious on the floor, bloodied and battered.

This brings me to my main bugbear with this game – the QTE indicators that allow you to counter opponents’ strikes or pull off reversals. Problem is, you’ve got to be lightening fast to pull them off as they only appear onscreen for a split second. Fail and you’re down for the count. This proves really irritating when it repeatedly leads to yet another defeat.

Still, the new Limb Targeting System adds a welcome element of strategy to the game, allowing you to grapple your opponent and focus attacks on their head, arms or legs – making it easier to submit them. 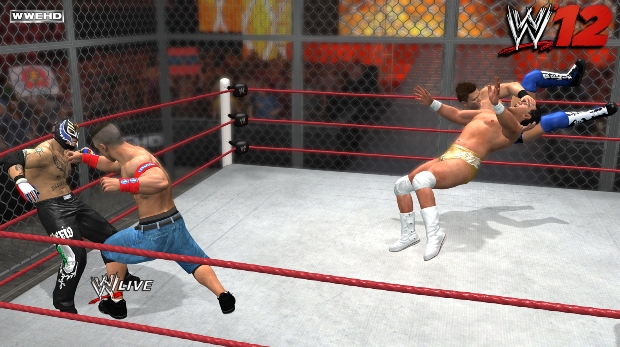 It’s also worth noting  all the new broadcast camera angles that document your progress. The camera works really well, perfectly replicating the TV show and keeping up with all the action. The developers apparently worked alongside the TV production team and included 25 new angles to capture everything. It really does mean you’re immersed into the action. Also, in the graphics department, a lot of time seems to have been spent on the immediate ring environment too. The physics for the ropes and the ring now react to each thump and thud; get smacked down onto the canvas and the ropes bobble and the mat springs into life.

Prior to its release, the developers were really pushing the game’s new Predator Technology, which claims to offer a more fluid and dynamic wrestling experience. Effectively this improves the transition between moves, melding them together into a seamless chain and making everything look more authentic. Combined with the improved textures and graphical overhaul, WWE 12 is really quite pleasing to the eye.

Regarding fluidity, players can also now interrupt manoeuvres and movement, so you don’t have to wait until the animation finishes before reacting to a situation. Not only does this feel more realistic but it looks more realistic. 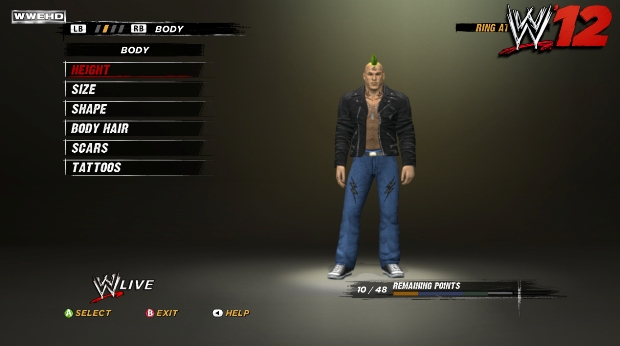 There are plenty of customisation options to create new fighters

The fights feel slightly less formulaic than in previous games, largely because of the tweaks that mean the momentum of a match can shift in an instant, adding drama to the proceedings. Fighters tend to start a bout with more gusto, the matches starting full of raw enthusiasm and energy before waning a little deeper into a fight. The pacing works really well; downed characters get up more quickly than past games, ready to resume the action. The ability to comeback from a seemingly lost cause and the fact you can store finishing moves, means you can bide your time and unleash them to devastating effect. And there’s the Breaking Point submission system, which is effectively a mini game that determines whether you win or the battle continues.

Fans will relish all the content in WWE 12 and will enjoy the various fighting options and vast roster. There are a few gripes – notably the QTE – but otherwise it’s a fairly solid game and arguably one of best representations of the sport for many years.

It looks good and includes all your favourite wrestlers and moves. The controls have been overhauled and the new camera angles and Predator Technology work well. Loads of game modes

The QTE counter moves are horrible and lightening quick reactions are needed. May not have great appeal to non-WWE fans

Final Verdict:
GOOD
THQ claims this is "a Bigger, Badder and Better WWE Videogame Experience"... and you'd have to agree. It's not perfect but there is plenty packed in this package to keep you entertained
A copy of this game was provided by Developer/Publisher/Distributor/PR Agency for review purposes. Click here to know more about our Reviews Policy.