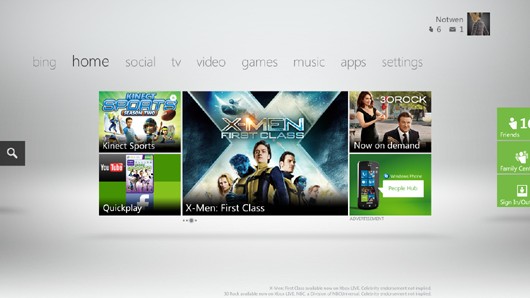 The new Xbox 360 Dashboard Update is coming this fall which people will certainly notice, and we have the details of what it will have.   This fall update with make the Xbox Dashboard more attuned to the Xbox 360 Controller and Kinnect, not having to switch between hubs.  Currently it is really weird and a pain in the ass signing in twice with Kinect after signing in with a controller, or signing out only to sign back in again.  So this will hopefully be a nice change in the update to make things more convenient.

This Fall update will also let you use Kinect’s voice-recognition to say any category, in conjunction with the new Dashboard, will take you to that specific menu instantly.  Microsoft will have this out for the US, Canada, and UK with it coming to other territories when it can.  The new voice recognition integration doesn’t end there as you will also be able to take advantage of the new Bing search facility.  Simply saying ‘Xbox, Bing’ followed by saying whatever you’re looking for will bring up a list of matches with icons to let you know whether it’s a TV show, movie or a game. This new feature will be compatible with all video services such as Netflix, Hulu Plus and Zune, which is one awesome addition to the Xbox 360 if you ask me.

Of course what would an update be with out adding some new features to the new social networking features.  You can more easily post updates, send custom messages and have it update when you unlock an Achievement using Twitter and Facebook.  You can ignore friends on facebook if you wish as well as having the ability to disable it all together.  The new Dashboard has not been officially named but right now it is NXE2.0 and you can check the pic above to get a glimpse of what it will look like.  It will be released this Holiday Season, 2011.