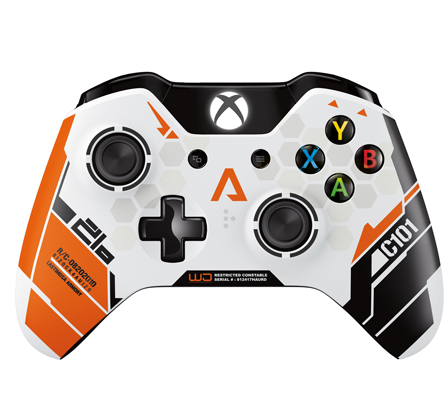 Titanfall will be launching this March on PC, Xbox 360, and the Xbox One, but it is the latter version that is getting top billing from the developers, publishers, and by Microsoft themselves (obviously). To commemorate the release of the hugely anticipated multiplayer first person shooter, Microsoft have unveiled a Titanfall themed limited edition Xbox One controller.

“In a collaborative effort with the Xbox design team and the Respawn art department, our goal was to create a controller that feels as if it is a piece of military spec hardware transported from the universe of Titanfall and into players hands,” stated Joel Emslie, Lead Artist at Respawn Entertainment.

The controller’s design makes it look like a striking piece of high tech military equipment (although the actual controller itself is functionally and ergonomically identical to a standard Xbox One controller).

Titanfall, being developed by Respawn Entertainment, and published by EA Games, will launch on PC, Xbox 360, and Xbox One March of 2014. Stay tuned.