Xenoblade Chronicles is an open world action RPG developed by Monolith Soft and published by Nintendo.

Development on Xenoblade Chronicles began at Monolith Soft a year before the studio was acquired by Nintendo. Monolith had originally been in the midst of developing games in the Xenosaga series, which director Tetsuya Takahashi envisioned as a six-part series. However, due to the disappointing commercial performance of the first two Xenosaga games, it would decided that the series would end with the third instalment.

This led to morale in the development team at Monolith being at an all-time low, which resulted in Takahashi conceptualizing, pitching, and green-lighting the development of Xenoblade Chronicles, with the support of Nintendo. The focus of the development team was on telling a grand and sweeping story, and on having that reflect in the gameplay as well, due to which they decided on the game’s large and open-ended open world design.

Takahashi initially considered a turn-based battle system for the game, but decided to a real-time action system would work better. Transitions between the environments and battle arenas were also considered, but Takahashi felt they disrupted the flow of the gameplay and decided that battles would take place in real-time environments instead. The number of cutscenes in the game was cut down from previous works by Monolith Soft so as to have a better balance between storytelling and gameplay, though the former still very much remained a focus.

The game was originally going to have no connected to Takahashi’s larger Xeno meta-franchise, with Monolith originally intending to call it Monado: The Beginning of the World. However, then-president of Nintendo Satoru Iwata had the name changed to Xenoblade (Xenoblade Chronicles in western localizations) in order to both, honour Takahashi’s past work and recognize the effort being invested in the game by him and his studio.

Takahashi, who wrote the scenario and also served as the director and producer on the game, co-wrote the script with Yuichiro Takeda and Yurie Hattori. Genki Yokota served as co-director, while the game’s music was composed by Manami Kiyota, ACE+, and Yoko Shimomura. Yasunori Mitsuda composed the game’s ending theme, “Beyond the Sky,” while Australian singer Sarah Àlainn performed the track in English. 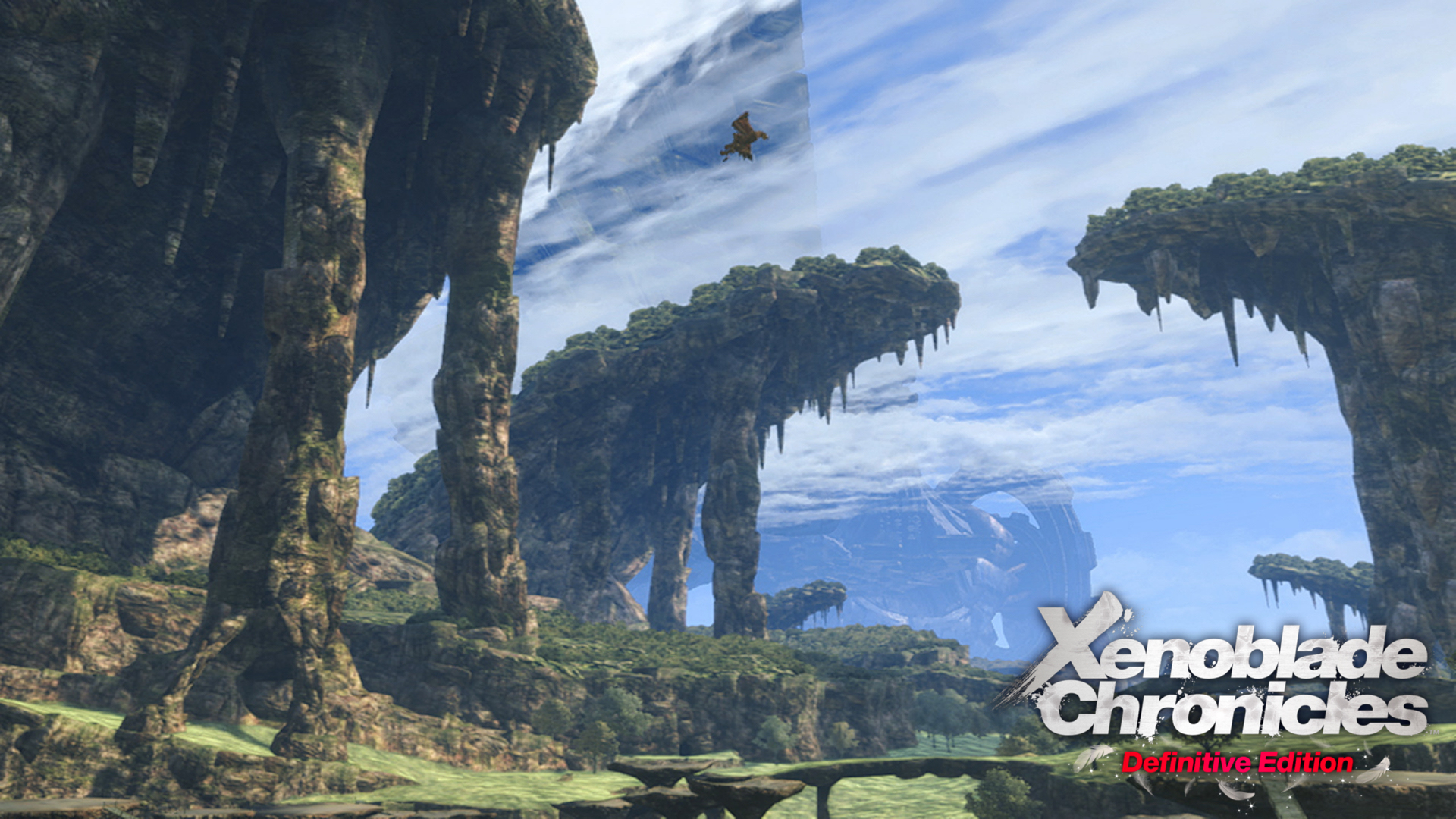 Xenoblade Chronicles was officially unveiled by Nintendo at E3 2009, before releasing in Japan the following June. In August 2011, it was released in Europe, however, reports started emerging that Nintendo of America did not plan on releasing the game in North American territories (during development, Monolith Soft had worked under the assumption that the game would see a global release).

This led to a large-scale fan campaign called Operation Rainfall, with the objective of getting Nintendo of America to green-light the releases of Xenoblade Chronicles, The Last Story, and Pandora’s Tower. This entailed online petitions, organized campaigns, and emails, phone calls, and communications via social media to Nintendo. Operation Rainfall led to Xenoblade Chronicles becoming the #1 most pre-ordered game on Amazon.

Eventually, Nintendo of America finalized and announced the localization of all three games under Operation of Rainfall. Nintendo of America president Reggi Fils-Aime said that though Nintendo had taken the fan campaign into consideration, it had not been the deciding factor for them when determining whether to release the games in North America.

In 2013, development of a port of Xenoblade Chronicles for the Nintendo 3DS began, with the help of developer Monster Games (since Monolith Soft were busy working on a sequel). Though originally planned for the 3DS, the handheld’s technical capabilities were far inferior to those of the Wii, and porting proved to be a very difficult process. As a result, it was decided that the game would be exclusive to the more powerful New Nintendo 3DS. Due to the system’s additional shoulder buttons and C-Stick, the game could retain the control scheme from the Wii version as is. 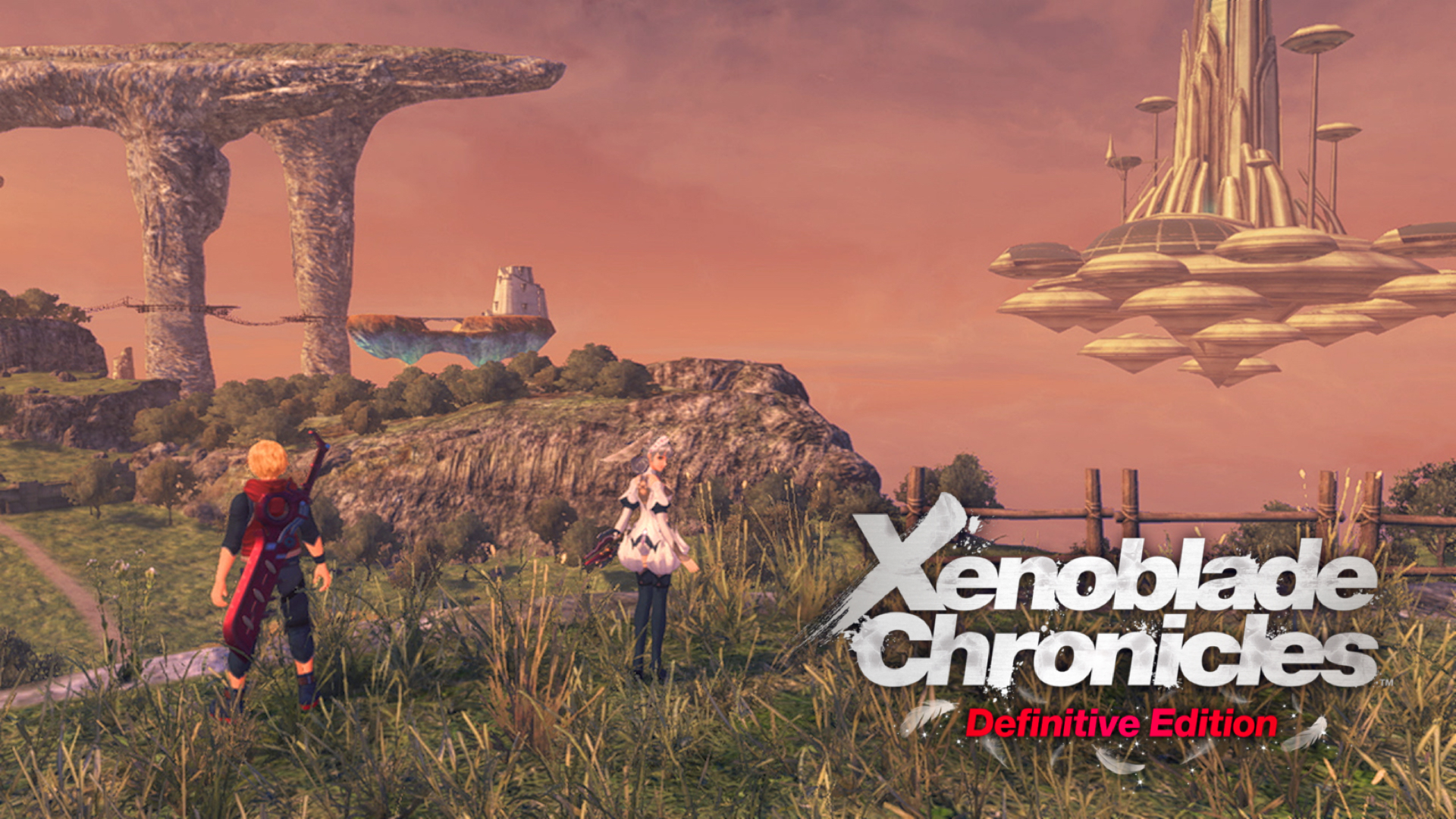 Xenoblade Chronicles 3D was announced in 2014, and released for the New Nintendo 3DS in April 2015. The game featured Street Pass functionality as well as support for amiibo, while 3D support was also featured, in spite of difficulties in ensuring the same during development. Environments were also rebuilt for the system, while development also entailed the creation of a new graphics engine and new level of detail system.

It was confirmed that the Future Connected epilogue would be set one year after the game, feature a completely new location that was not included in the original release, and would feature a new battle system. Nintendo also confirmed that Xenoblade Chronicles: Definitive Edition would not include some features from the game’s 3DS port, including the model viewer and amiibo support. In March 2020, Nintendo announced that the game would release worldwide on May 29, 2020.

Xenoblade Chronicles is set in the backdrop of two titans, Bionis and Mechonis, being locked in an endless war. The two came into existence eons ago and became embroiled in endless conflicts, until only their frozen corpses remained. Eons later, the bodies of these titans became inhabited by various lifeforms. The Bionis was inhabited by all organic life, the most dominant of which were the humanoid Homs. The Mechonis was home to to mechanical machines, called Machina.

The inhabitants of Bionis and Mechonis – specifically the Homs and Machina – became embroiled in furious wars with each other. One of the key weapons used by the Homs in this war was the Monado, a mystical sword that would grant its wielder visions of the future. In the beginning of the game, Colony 9 on Bionis comes under attack and is ravaged by Machina called Mechon. Colony 9 resident Shulk comes into possession of the Monado, and he sets off on a journey with his friends to seek vengeance against the Mechon. 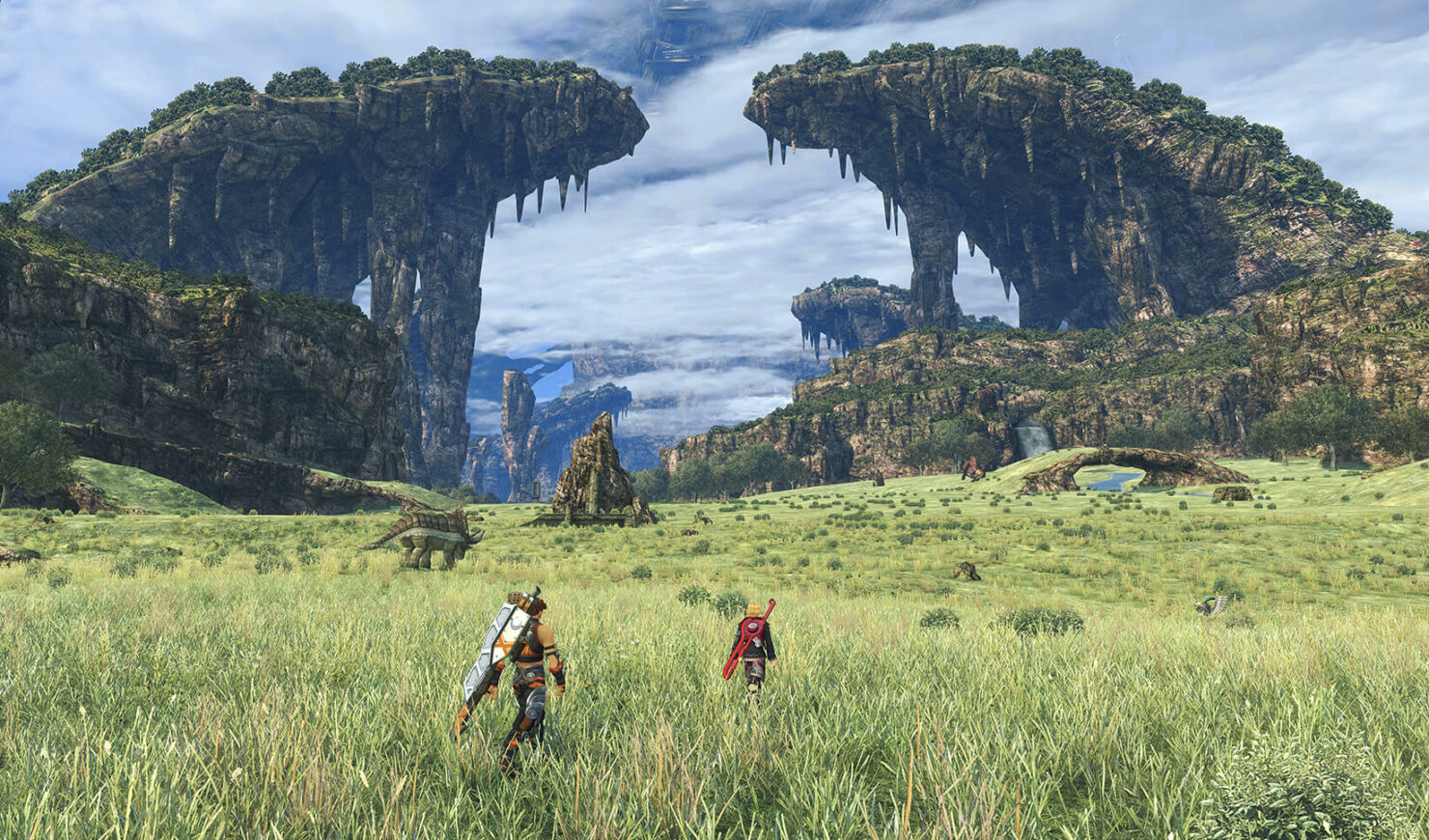 Xenoblade Chronicles’ battles occur in real time. Player control the movement of one of three party members, while all other party members attack automatically. Attacks called “Arts” are manually input by players. Battle Arts are available after cooldowns, while Talent Arts only become available after a certain number of auto-attacks is performed. Arts can also be used to replenish health, while health is regenerated automatically outside of combat.

Levelling up allows players to unlock new Arts, and players have choose which Arts each character can use by equipping them in the Battle Palette. Performing attacks during combat also increases every character’s “aggro ring” (which each character has), and the larger the ring grows, the more enemies focus on that character. Characters also have a Tension meter, and at higher Tension points, characters can deal more critical hits.

As each character lands successful hits, the “Party Gauge” also fills up, which, in turn, allows players to chain combo attacks on enemies. Thanks to the Monado, Shulk can also use the Visions system, which allows him to see glimpses of the future and change strategies on what he sees enemies might be about to do. Players can also customize their party characters in various ways, including weapons and armour. 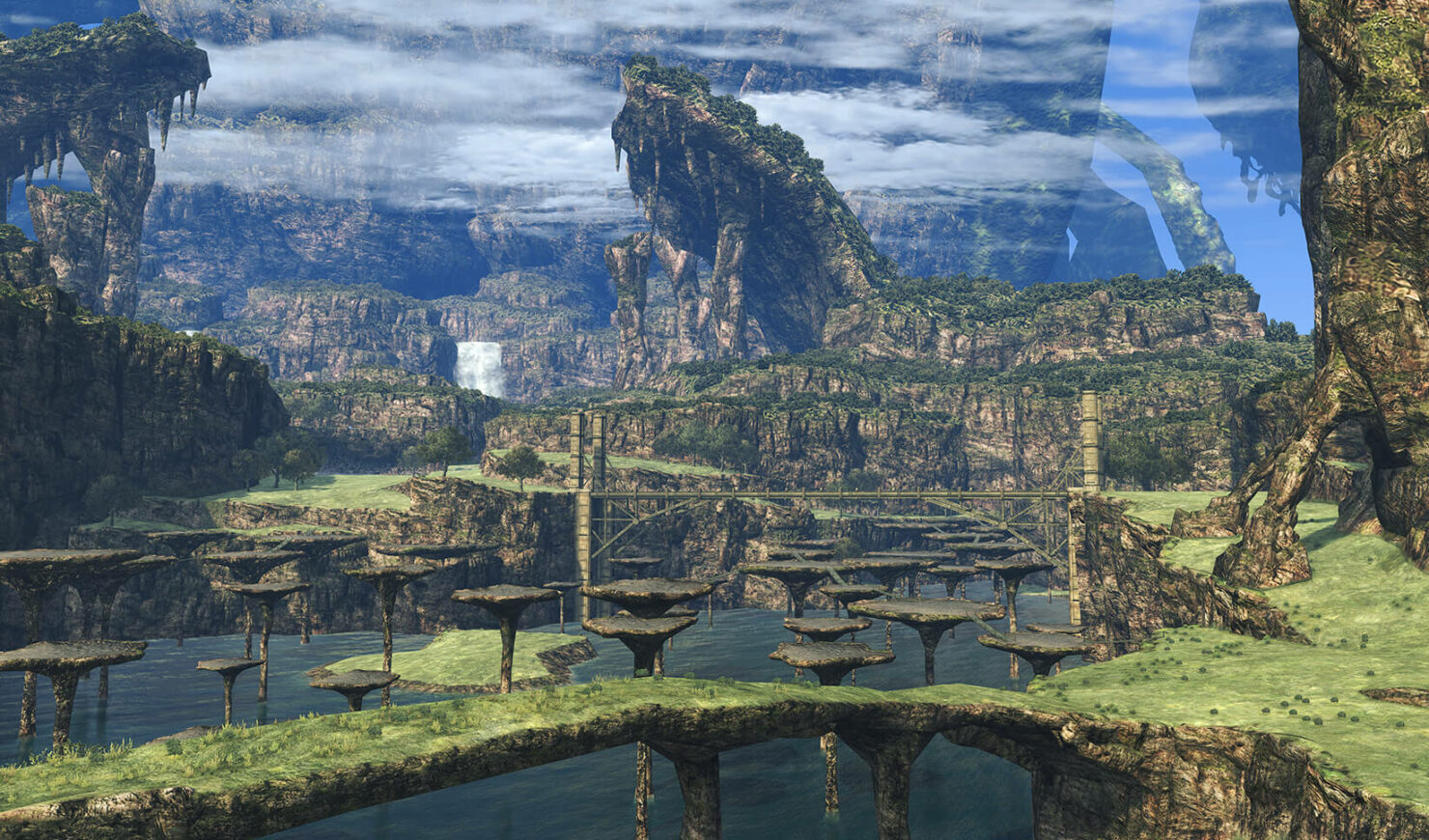 Xenoblade Chronicles takes place in a large, seamless open world environment. There is a dynamic day/night system in place that affects various things, such as enemies, quests, and more. Exploration is heavily focused, and players are encouraged to explore environments to find new items and gear and undertake quests and side quests.

A Party Affinity system also shows the growing relationships between party members, and as these relationships grow, more story moments and character interactions are revealed. Players can also use gems dropped by fallen enemies in the gem crafting mini game. These gems can then be equipped by characters for boosted stats during combat.