Zombies have always been big business, and the success of Red Dead Redemption’s Undead Nightmare DLC has shown how flesh eaters can be successfully transferred into even the most unlikely franchise with great success. With this we move onto Yakuza: Dead Souls, a fairly naked attempt to infuse a bit of zombie magic into Sega’s story driven franchise about everyone’s favourite eastern mobsters. The same polish and quality are there, but the move from brawler to shooter has been unkind to the franchise, and there are many points when it needs to treat its B-movie horror elements with the appropriate pinch of salt. 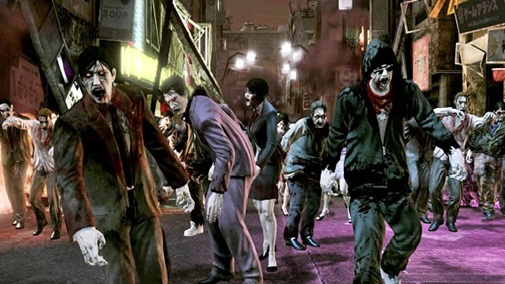 The idea of Yakuza with zombies in it is pretty fun, but it seems that Dead Souls didn’t get the joke

The first and largest change you’ll notice is in the combat. Once a 3D brawler that saw you mopping up the streets of Kamurocho (and Okinawa based on which entry in the series you were playing), Yakuza has had to adapt its core gameplay mechanics to take on the zombie hordes. The game now takes on third person shooter aspects, seeing you handling a variety of weapons as your chosen character. You still get the option to wield bits of the scenery as melee weapons, but balancing issues prevent this from being a properly legitimate tactic later on in the game. Likewise, heat actions (or special moves for the non-Yakuza fans out there) make a return in the form of heat snipes, context specific shots you can do when you fill up the heat gauge. Ranging from blowing up car fuel tanks to shooting grenades out of the sky, these are a fun addition that keep the action intense. The series’ levelling up mechanics have also made the translation from fists to pistols, and it is as finely tuned a system as ever, offering diversity and choice of play style without ever becoming complicated or bogged down by numbers.

The big problem, however, is that it sounds much better than it actually is, as camera problems that were forgiveable for a fighting game become difficult to swallow in a shooter that demands quick reactions. The aiming function is set according to which way your character is facing rather than how you point the camera, making running and gunning a sordid affair that never feels especially intuitive. The sheer sluggishness of the camera likewise adds to this issue. Camera and aiming issues aside, the gunplay of Dead Souls can be satisfying, and it certainly offers a simple and accessible touch that other titles in the genre could learn from. When it comes down to it though, the transition from brawler to shooter is anything but smooth, and the gunplay of Dead Souls becomes a bit of a chore as it progresses. 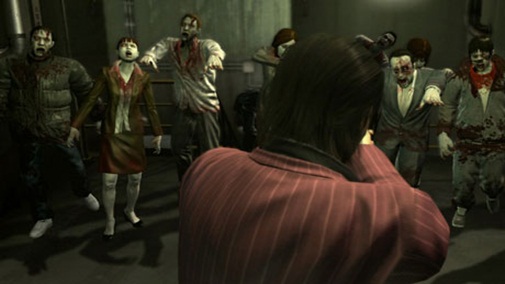 To paint a picture of a lifeless shooter doesn’t do justice to the Yakuza series however, as anyone who has played previous titles in the franchise will know how story focused the games can be. Dead Souls follows in a similar vein, albeit with mixed results. The story itself, though linking the tales of four protagonists as in Yakuza 4, never really gets past the whole “zombie outbreak” paradigm. Despite this simplicity, the game retains the vast amount of cut scenes that other Yakuza games are known for. Whilst it worked in previous Yakuza titles, the weight of the story exposition has a tendency to slow Dead Souls down in ways that don’t feel appropriate for the new gameplay style. Likewise, the seriousness with which some of the zombie elements are handled is a missed trick, as a more self aware and humorous narrative voice could have been used to great effect. I want to give Sega the benefit of the doubt here though on account of the usually impressive stories of the Yakuza games, so let’s just put that one down to the usual translation issues associated with humour.

One aspect that Dead Souls has kept in common with its predecessors is its presentation quality. The game looks just as good as Yakuza 3 and 4, with impressive character models and animations. The environments don’t fare quite as well, but there is no doubt that Dead Souls is a polished title. The sound too is decent, with the voice acting being as well delivered as always. It’s still Japanese audio with English subtitles only, but you ought to be used to this by now if you’ve ever played a Yakuza game before. When it comes to matters of presentation, the Yakuza series always delivers, and Dead Souls is no exception to this. 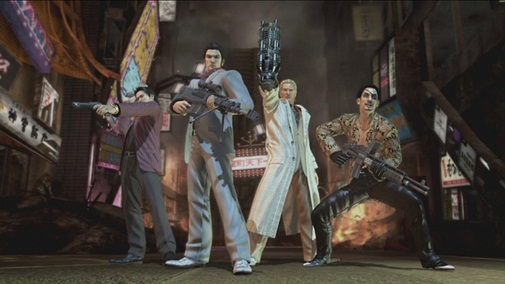 The story isn’t as integral as in previous Yakuza games, to Dead Souls’ detriment

As with all Yakuza games, one of Dead Souls most redeeming features is its lifespan. Each character has a story that rivals the length of your average action game and, with four characters to play over the course of the game, you can see the play time racking up. It just doesn’t seem to have quite the staying power of previous Yakuza games though. The side missions and intricate details of city life are present as always but, as the quarantine zones spread with the viral outbreak, these open world sections become more and more scarce as the game proceeds, limiting the chances to enjoy mini-games and side missions and severely impacting upon the game’s variety and pace. The big issue with the lifespan however is the fact that you probably don’t want it to continue for so long. The more time you put into Dead Souls, the more the myriad faults of the engine begin to frustrate and annoy.

As far as Yakuza games go, Dead Souls comes off as ultimately disappointing. When I consider some of the old Yakuza games, they were certainly a case of a generic idea being executed successfully. By comparison, Dead Souls is a fun idea that hasn’t managed to materialise effectively well. Had the mechanics been tightened up, the free roaming side missions better interspersed into the narrative and the B-movie elements treated with a bit more humour, Dead Souls would be an easy recommendation. As it stands though, it’s hard to see it pleasing all but the most hardcore Yakuza fans.

The copy reviewed was for PS3.

Final Verdict:
FAIR
A fresh direction for the Yakuza series, Dead Souls sadly seems to take one step forward and two steps back. The new shooting mechanics are robust if lacking in depth, but the new narrative structure unfortunately gets in the way of the series' awesome open world elements
A copy of this game was provided by Developer/Publisher/Distributor/PR Agency for review purposes. Click here to know more about our Reviews Policy.