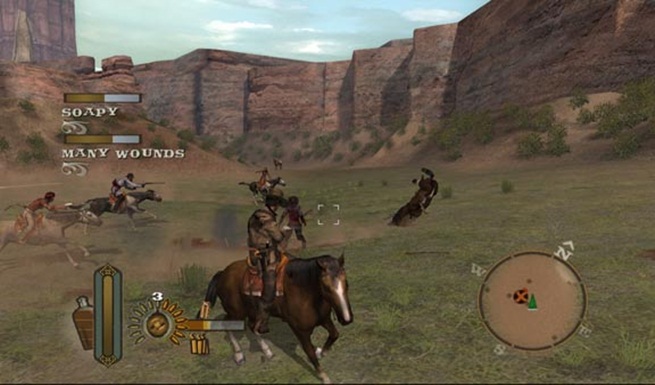 It may look dated, but at the time it was pretty cool

Generic name aside, Gun was a solid attempt at a semi-open world wild west game. It had bounty hunter missions, classic quick draw face offs and some savage horse chases. Rolling down the desert on your trusty stallion never gets old. Though there wasn’t any one particular chase scene that stood out, there were so many small horse races that got the blood pumping.

6. Call of Juarez: Bound in Blood

Bound in Blood told a classic spaghetti western tale of love, betrayal, native Americans and a truck load of treasure. It also had an intriguing cover system and the choice of two characters with different abilities. It also had horses. Sure, it’s a little weird riding a horse from a first person perspective, but shooting from horseback always offers a thrill.

Horse vs. iron horse. Who will win?

Considering Redemption was one of the best games of last year, does it really need much justification for making this list? RDR lovingly recreated just about every wild west cliché you can think of, and intense horse chases were no exception. I don’t care if it’s unrealistic, racing alongside a train on horseback is always cool in my book.

4. The Legend of Zelda: Twilight Princess

It’s amazing that a horse could become such an iconic character in itself. Then again, that’s Zelda for you. We all love Epona, and Twilight Princess made it even more practical to mount everyone’s favourite steed with improved horse combat. The chase against Ganondorf at the end was a totally intense ending. An amazing outro to an amazing game.