2010 FIFA World Cup is the latest instalment of the world’s favourite sport in video game form. Not baseball, NASCAR or hand-egg ball: I’m talking about Proper Football. As usual, EA Sports is responsible for developing and publishing probably the best football game I’ve played to-date. World Cup is everything you could ask for from an officially-licensed game of the world’s biggest and greatest sporting tournament, but whether it’s good enough to make owners of FIFA 10 purchase a second FIFA game this year is a different question.

Visually, World Cup just edges FIFA 10. Indeed, World Cup is, put brutally, little more than FIFA 10 dressed in new clothes – but they are some truly impressive threads. The presentation, as you’d expect from an EA Sports title, remains first class throughout; and it nails the colour and excitement that are integral to the tournament. It’s not just the menus that smack of class, awesomeness runs through the game itself. 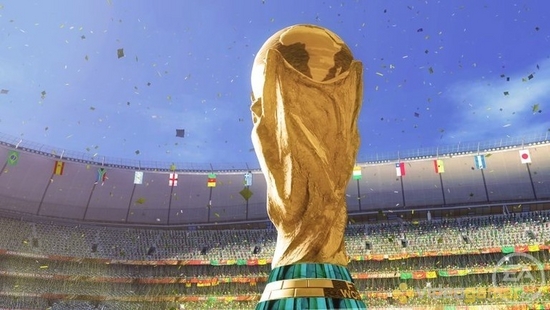 FIFA has announced that, to save costs, the cup used from 2014 onwards will be chocolate covered in tin foil…

The atmosphere of match-day is incredible: air-horns, ticker-tape and the nauseating caterwaul of massed ranks of Vuvuzelas (which, thank Christ, can be switched off) that combine like Voltron to create an air of excitement that effortlessly exceeds previous offerings. Andy Townsend and Clive Tyldesley earn their money from the South African Tourist Board in the commentary box: preaching the virtues of the host nation at every opportunity and also bearing a generous amount of bespoke lines that help bring the action to life. This level of detail is maintained throughout the game. An attractive hub in the straight-up World Cup mode feeds in news from the virtual tournament, while off the pitch players are vulnerable to training injuries that all help make the game feel convincing and ensure that come victory or defeat it’s difficult not to feel attached to your chosen team.

Player likenesses for the top-drawer teams are fantastic. Smaller footballing nations aren’t quite so well presented however. And of course beneath that a-list sparkle lays a game that still stands as one of the very best takes on football – and it’s had a bunch of improvements of its own. Players are more composed when running onto through balls, meaning that fast-and-fluid aggressive football is now a much larger part of the game. This has had a significant impact on other areas too: crosses are now more often met with strong, well-directed headers or – more delightfully – well-struck volleys, meaning that goals now have a tendency to be suitably spectacular. It’s certainly FIFA 10’s beautiful game, but it’s had botox. 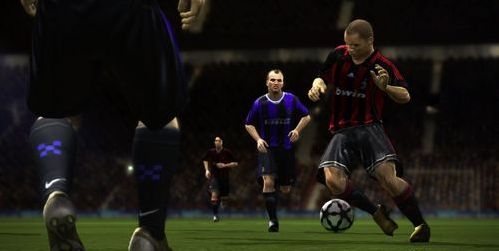 Why is Father Grigori playing for the Blue Team?

It’s had a subtle facelift too, and it’s one that goes a surprisingly long way. The pitch is the biggest beneficiary which, on paper, sounds underwhelming; but given that the grass holds the most real estate (pun intended) in a game of football, the new pitch textures make World Cup look a step beyond even the immediate predecessor, let-alone earlier incarnations. Player-likenesses are another area of improvement: England’s ranks, in particular, are eerily spot-on, though this does widen the gulf between the players that aren’t deemed worthy of some dedicated sculpting: lesser teams like Slovenia are swollen with clay-faced look-a-like orcs that could well have wandered in from Morrowind.

Penalties have been tweaked, and there’s now a pressure bar, which is trickier to nail during important moments in a match. 2010 FIFA World Cup is about more than refinement though. Old favourites like Captain Your Country (an offshoot of FIFA 10’s Be a Pro that lets you take a player from the bench to World Cup glory) make a return, but they’re joined by some new features. The most successful of these is Story of Qualifying. Scenarios from the preliminary stages of this year’s World Cup can be played: meaning the outcome of notorious matches like Ireland’s controversial exit thanks to Henry’s very own gesture moment is open to revision. The number of them included on the disc is impressive, and there’s even a few from pre-2006 in Germany. Should such a scenario involve penalties – and when England are involved it invariably does – 2010 FIFA World Cup features a slightly tweaked system. Pressure comes into play, with a moving needle that needs to be stopped at the right place before controlling the power of the kick with the shot button. It’s even possible to stutter a run-up, confusing the keeper at the expense of total control. It’s undoubtedly better than what’s gone before. 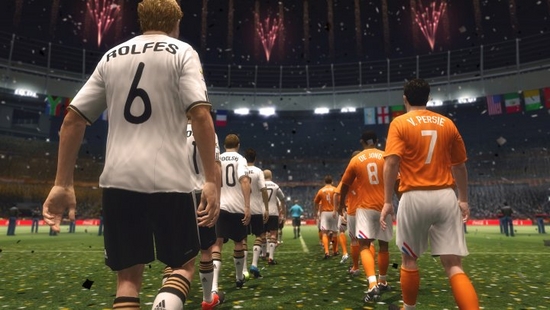 8/10 Americans think “Dutch” refers to a character from Top Gun.

Some of the new additions aren’t so welcome. The managers that patrol the touchline are cute at first but are overused and all too frequently the action is broken up so we can see a close-up of Fabio Capello sniffing his fingers. The dirty git Likewise, the crowds that the game cuts away to are poorly modelled: worlds away from some of the well-constructed player likenesses that make them ultimately look naff.

Then there’s the ‘Dad Pad’, a mode that reduces the control system to two buttons: Pass and Shoot. EA Sport’s beautiful game can’t withstand being so heavily blunted by a system that’s clunky and unreliable. Too often when attacking the system will cross the ball rather than lay it across the pitch, making it much harder to score when playing with the dumbed-down controls. It’s a well-intentioned attempt to open up the complexities of FIFA to a new audience, but sadly it doesn’t really work.

But the big question remains – does 2010 FIFA World Cup do enough to justify a purchase for owners of the already brilliant FIFA 2010? So yes, there are no club teams here, and the improvements it makes are incremental at best. But improvements they are – this is overall a better game than FIFA 10, and while it’ll inevitably be outstripped by FIFA 11 later this year, it still stands as the best take on the sport which is currently available.

But the big question remains – does 2010 FIFA World Cup do enough to justify a purchase for owners of the already brilliant FIFA 2010? So yes, there are no club teams here, and the improvements it makes are incremental at best. But improvements they are – this is overall a better game than FIFA 10, and while it'll inevitably be outstripped by FIFA 11 later this year, it still stands as the best take on the sport which is currently available.