Infinity Ward’s latest has quite the array of problems.

Infinity Ward’s Call of Duty: Infinite Warfare is now available and it’s been getting some interesting reactions. While many enjoy the single-player campaign – despite Jon Snow being the equivalent of Dick Dastardly as a villain – the multiplayer has had its fair share of negative reactions. Now before you think it’s because of everything being futuristic, it really isn’t. Some of these are issues that have been plaguing the franchise for years now. So without further ado, let’s take a look at some of the top five things hardcore players hate about Call of Duty: Infinite Warfare.

Call it what you want – a lack of dedicated servers, poor tick rate, skill-based matchmaking that heavily favours skill matching over connection quality or lag compensation – but more than any COD ever, Call of Duty: Infinite Warfare suffers from connection problems. Players report being melted by a single shot from enemies while firing several shots beforehand. Being shot behind corners is another good one and despite hybrid servers that do rely on dedicated server support, Infinite Warfare still faces problems with lag. Maybe it’s the low population count. Maybe it’s just how the game is designed. Either way, if you’ve faced any of the above problems before – and maybe you haven’t, which is a good thing – then Infinite Warfare won’t be much better, especially with the emphasis on low time-to-kill and twitch movements.

Ever since Advanced Warfare threw in boost jumps, Call of Duty’s movement has felt a little weird. It got especially stilted last year with Black Ops 3. While Titanfall’s wall-running felt smooth and actually served a purpose – increasing your momentum and making you tougher to hit – Infinite Warfare‘s wall-running feels rudimentary. It’s limited by a meter, doesn’t make you faster and for all intents and purposes, it’s as stilted as a graphic novel with stick figures. The funny thing is that in Infinite Warfare, players have been reporting issues with properly latching on for wall runs or grabbing ledges while exiting wall runs. When the movement, which is such a big factor to the working of multiplayer, doesn’t even work properly, then what do you do? 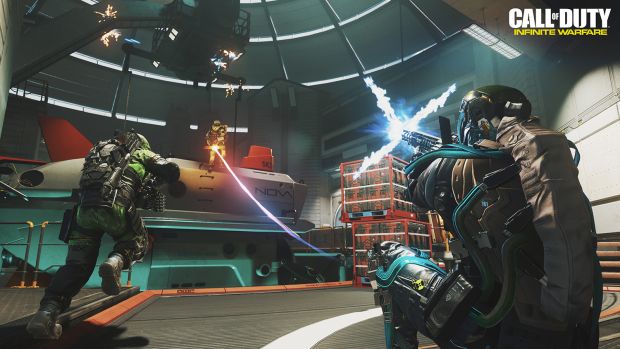 So your network connection is peerless and you’re fairly decent at the movement, quirks and all. You still need to deal with the map design. When your single player campaign features zero-G combat, who thought it would be a good move to not have something similar in the multiplayer? Furthermore, many of the maps simply follow a maze-like layout without any rhyme or reasoning, with doors and objects splattered about. There seems to be no distinct flow to maps which, granted, it’s a corridor shooter but you can do something to spice the settings up especially when they’re in friggin’ space. While this is a highly subjective complaint, there’s no arguing that the map design is at least partly to blame when it comes to… 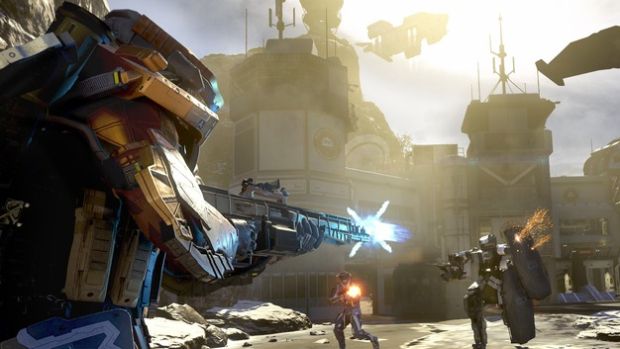 Spawn logic is the algorithm in, say, a first person shooter like Infinite Warfare that determines where you spawn. It’s most defining moment of usefulness is deciding where you respawn because why the heck would you want to be borne unto man in a place that’s being carpet-bombed back to Vietnam? Unfortunately, Infinite Warfare has some fairly poor spawn logic. It’s not odd to see players spawning right next to the enemy. Heck, it’s not odd to see entire teams spawning right around the corner from an enemy. This leads to instances where you can’t even walk a few feet ahead of you without being mowed down by whatever happens upon you in that time. Such problems have always plagued the franchise but Infinite Warfare seems to be the worst yet.

Though the Specialists of Black Ops 3 weren’t exactly welcomed with open arms, players somewhat opened up to them over time. That’s because the abilities weren’t all that bad (barring Seraph’s Combat Focus because let’s be real) and the Specialists themselves had some kind of personality. The Combat Rigs in Infinite Warfare are just…meh and that’s not really a good thing. Granted, there’s more to their lack of appeal than just being “blah” all around. Also, some of the Rig traits can be equipped separately. The Warfighter’s Resupply trait is essentially like Scavenger while the Stryker’s Trophy Drone is the Trophy System except with the ability to recharge. Yay, we suppose? The customization boils down to which Payload (or special ability) you want to use while trying to play around whatever weird traits each Rig has. If you’re counting on being a sniper with faster regenerating health or your scorestreaks not resetting on death (but at a higher point cost overall)…well, you can still do that but not as the sniper-dedicated class because it doesn’t have those traits.