A lot’s been said about Spider-Man and its loving and respectful adaptation of the famous wallcrawler and everything to do with him, and it’s been said again and again. Mostly because it’s really true. Insomniac’s devotion to one of the world’s most popular superhero shines through in every inch of the game, and one such area where that happens is with the villains. The group of baddies we come across in Spider-Man is an excellent one, and though a few have clearly been developed much better than a lot of the others, every encounter still feels unique and memorable.

This list will contain a mixture of new antagonists, and bad guys we’ve already seen in Spider-Man but expect to see making a return. So without further ado, let’s jump right in.

Obviously, there will be spoilers ahead, so if you haven’t played Spider-Man to completion yet, read on at your own risk.

Ah, the big one. Alongside the likes of Green Goblin and Doctor Octopus, Venom is perhaps the villain that gets associated with Spider-Man most often. A great many people expected to see the Symbiote in some form or another in the very first game itself, but Insomniac made it clear in the build up to the game’s launch that that wouldn’t be the case, that the alien symbiote was far too big a deal to just cram into a game that was already brimming with other notable bad guys. But you know what? Those people weren’t wrong. Venom may only have appeared for a single second right at the very end of the game, but that fraction of a second was enough to send Spidey fans all across the globe screaming with j0y.

The setup done here is incredibly exciting, and it’s become increasingly clear that Venom is going to be an integral part of Spidey’s plot in upcoming instalments. Seeing the symbiote attached to Harry Osborn, whose ill person floats in a stasis tank, may have sent us all reeling with a thousand questions in our minds, but the possibilities are endless. Are we going to see a Venom without an Eddie Brock? Perhaps this is some other rendition of the symbiote- Carnage? Riot? Red Goblin? Something else entirely? In the Ultimate Spider-Man animated TV show, Harry Osborn and the symbiote very often went hand in hand, so are Insomniac going to take inspiration from that storyline, perhaps? Whatever it is, it sets up truly exciting things for the sequel.

Oh, and speaking of Goblin…

Even though we never really saw Green Goblin in Spider-Man, the Osborns were at the heart of the game’s story from start to finish. In the eight years that Peter Parker has been Spidey, he has come up against many bad guys, some of whom we’ll be speaking of going forward, but the game made it pretty clear that Norman Osborn, for all his shady, slimy ways, hasn’t made use of the infamous glider up until now. But surely, without Green Goblin, there can be no Spider-Man, and the game does more than enough setup for what is perhaps Spidey’s most famous villain to make an entrance with a bang in the inevitable sequel.

Hints of Norman Osborn’s misguided experiments are peppered throughout the experience. GR-27, or Devil’s Breath, may or may not have something to do with Green Goblin, something that becomes even more of a question mark when you take Venom’s involvement into consideration, but even if you ignore the failed science experiment completely, there are still plenty of little hints that point to the rise of the Goblin in the future. The glider is mentioned and hinted at very clearly in the Oscorp lobby, Gobbie’s Pumpkin Grenades are shown in Norman’s hidden lab, while the entrance to his hidden lab itself is revealed by putting on a mask that looks way too much like Green Goblin’s ugly mug.

Otto Octavius’ transformation and his descent into villainy as the eight limbed Dr. Octopus were handled expertly by Insomniac in Spider-Man, taking cues from Sam Raimi’s rendition of the character and his relationship with Peter Parker more than anything else. Even though the moment he appeared on the screen, most of us knew where the story was headed, the game portrayed him in such a way that there were still moments of doubt when we couldn’t help but think- is this really going where I think this is going? Otto’s relationship with Peter and his motivations were written very well, so that when he did become the infamous Dr. Octopus, his transformation felt earned, and had more impact than it would have in any other scenario.

And even though Spider-Man ends up defeating the disgraced scientist at the end of the game, there’s still plenty of setup for him to return in some capacity in the sequels. We haven’t seen the last of Otto Octavius, that much is abundantly clear, and the final shot of him in his prison cell with an expression of absolute contempt and rage on his face should also clue you into the fact that he hasn’t given up on his misguided, evil ways. But how is he going to be integrated into the story going forward? Well, that brings us to our next point… 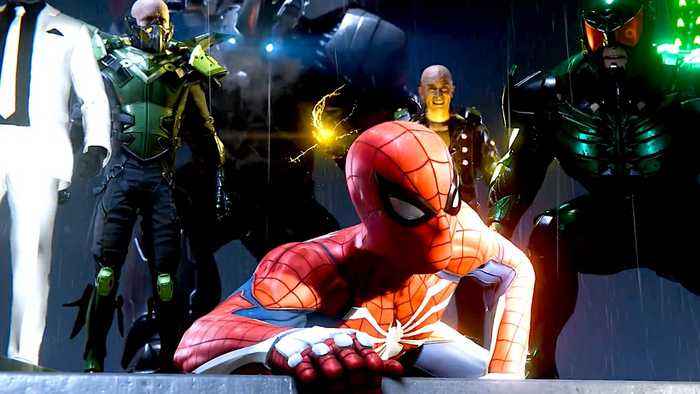 As we get closer to Otto Octavius’ tragic descent in Spider-Man, we start seeing hints of yet another major antagonist possibly making an appearance in the future. Otto is shown as a scientist with a lot of ideas but simply not enough funding to back them up throughout Spider-Man, but when the game revealed that he was being funded by A.I.M., the alarm bells surely went off in the heads of millions of Marvel fans. A.I.M., or Advanced Idea Mechanics, you see, is a very rich organization that, as Marvel fans would know, is also composed of villains and supervillains that seek to overthrow governments across the world through less than fair means.

A.I.M.’s funding of Otto’s deadly experiments, as well as Peter’s remarks about how the scientist shouldn’t be getting in bed with the shady organization, provide lots of clues about the future of the series. There’s no doubt that we’ll be seeing the organization in a big way in Spider-Man 2, and perhaps even in further sequels, as part of an overarching plotline that spans more than just one game.

Incidentally, Otto Octavius isn’t the only character in the game that has ties with A.I.M. Who else, you ask?

Taskmaster was a secondary character in Spider-Man, but it wouldn’t be an exaggeration to say that the small section of plot devoted to him, as well as the fights against him, were among the highlights of the entire experience. What elevated the character to another level entirely, though, was the fact that it was more about setting up potential plotlines in the future than anything else- and it did that pretty much perfectly. Taskmaster’s back and forth with Spider-Man, with its mix of antagonism, desire to teach Spidey new things, and wanting to learn more about the webslinger, was truly fascinating- but more importantly, he alsop mentions his secret employers several times.

Taskmaster is supposed to be one of A.I.M’s agents, and is associated with the organization quiet often, and just acts as yet another thread setting up the evil group’s involvement in sequels even further. Or perhaps, as Insomniac have done with so many other major characters and plotlines already, Taskmaster could be setting up something else entirely, and as a unique take on the character, could be associated with someone or something we may not expect. HYDRA, perhaps? It’s unlikely, but you never know! Either way, one thing’s for sure- we haven’t seen the last of Taskmaster yet.

Even though Spider-Man gave us its own version of the Sinister Six, we never really got to see the Sandman, who is known as one of the original members of the villainous group- but that, of course, doesn’t mean we’re never really going to cross paths with him at all. Peter Parker’s backpacks, scattered throughout Manhattan, serve many purposes, from including throwaway references and callbacks, to acting as nice little easter eggs, to, in some cases, even hinting at future plotlines. The Sandman falls into that third category.

Thanks to one of the backpacks that Spider-Man retrieves, we know that he’s come up against the Sandman in his eight year tenure as Spidey so far, and that he remains trapped in a vial of sand even now. Sandman is, as you might know, also one of Spider-Man‘s biggest and most famous villains, so is it so unlikely that that vial might, somehow, break, releasing the antagonist out into the world once again? No, actually, it’s pretty likely, and I have a feeling that that’s exactly what might end up happening in the sequel.

Man, Peter Parker has a really bad history with mentors in the field of science, doesn’t he? Helping Otto Octavius create the arms of Dr. Octopus will always weigh heavy on his soul, but as one of the backpacks found in the game tells us, he’s not the first scientist in Peter’s life to descend into villainy. Dr. Curt Connors, a.k.a. The Lizard, is also someone Spidey has gone up against some time in the past eight years, and we also know that though Spider-Man managed to cure the reptilian villain and turn him back into Dr. Connors, the change was ultimately temporary.

So The Lizard is indeed still out there- but where? We know that he wasn’t in the Raft, or he surely would have been among the escapees following the system-wide failure the supermax prison suffered in the game. It’s entirely likely that The Lizard is lurking in the sewers of New York somewhere, and it wouldn’t be a stretch to assume that he’ll pop back up to the surface some time in the future for another round of bombastic fisticuffs with his former student.

This one’s a little more thin than most (if not all) of the villains we’ve mentioned in this feature up until now- but come on. It’s Mysterio. One of Spider-Man’s most well-known villains. He has to make an appearance at some point in the future, right? And it’s not like he’s a completely unknown quantity in Insomniac’s adaptation of Spider-Man either. Just like Lizard and Sandman, Mysterio is also mentioned a couple times through easter eggs that might potentially be setting up future appearances.

The section at the Halloween party includes a fun little callback to the villain, establishing that Spider-Man has crossed paths with the master hypnotist in the past, while one of the backpacks we retrieve also contain a shard of his famous helmet. Additionally, we also see a book called “Work/Life Balance for Idiots” in the game, written by one Dr. Ludwig Rineheart, which, as Marvel fans would know, is one of the many aliases associated with Mysterio.