Some games have stories that truly seem to come from the muses themselves. Other game plots put our industry to shame and seem like they just fell out in the toilet during a developer’s morning bowel movement. 9 Hours 9 Persons 9 Doors (999) is a game that most certainly falls into the former category, and possesses a story gripping enough to rival most films and books. 999 plays more like a choose your own adventure novel than a traditional game, but it is a brilliant one all the same.

999 is a DS point and click adventure game pitching you in the shoes of a university student, Junpei, as he wakes up in a mysterious social game concocted by a shadowy figure that threatens his very life. He is shut on a boat with nine people, and has nine hours to escape before the boat will sink with all of them on it. The only way to escape is through a series of doors (nine of them to be exact), but these doors can only be opened using the differently numbered bracelets that each contestant has attached to their wrist.

Deciding who can open which door might sound a little tedious but it forces you to make decisions about which contestants have to team up to clear the puzzles behind the doors, and these choices ultimately affect how the story pans out later on in the game. The plot is always satisfying, regardless of which ending you wind up getting, and the tale is detailed, intricate and will always keep you on the edge of your seat.

The game’s intense story is well bolstered by a varied cast of characters. I say characters, but they feel more like real people as opposed to the stereotypical ciphers that usually infest our medium. You genuinely feel an attachment towards each and every contestant in the mysterious “nonary game,” and as excrement starts to hit the proverbial rotary blades you’ll find that 999 is really able to tug at the heart strings. What really gives 999 a leg up over the competition is the snappy script writing. Admittedly some of the descriptive writing can drag on a bit and descend into cheesy thriller fiction, but the dialogue between characters has a naturalistic vibe to it that really helps immerse you in the experience. It’s little in-jokes ad curse words that cut a fine line between not being offensive, but at the same time delivering the image of human interaction between each of the characters. Even when you wind up doing more reading than gaming in 999, it’s still an intensely enjoyable experience.

The game structure is split into two parts. You’re either flicking through text and engaging with the story exposition, or you’re attempting to escape from the locked rooms on the other side of the numbered doors by solving the puzzles that lie within. The puzzle sections fall into a familiar point and click paradigm, with all movement and investigations controlled using the touch screen. The interface works smoothly, and searching your surroundings and scrolling through your inventory couldn’t be easier. There are a few issues in the movement though. You move between static positions in each location but the smooth animations and transitions are occasionally let down by the directional buttons not entirely corresponding with where you are moving on the map. It’s not a huge problem and doesn’t take long to get used to, but it can still be a source of occasional frustration. A few very light interface inconsistencies aside, you should still consider 999 a cut above competing titles in the genre on account of the puzzles. Now I have a pretty average attention span, and I must embarrassedly admit that I find myself reaching for the guide most of the time when games contain obscure puzzles that revolve around too much trial and error. With 999, I seldom found this to be the case. The puzzles all follow a logical pattern and, as the game’s structure splits all the puzzles off into their own separate sections, there are no miss-able hints or items that can impede your progress later in the game. This also has the knock on effect of meaning you’ll have a few puzzles followed by, possibly, a little too much text reading before returning to the gameplay. In spite of this mildly predictable gameplay pattern, it almost feels worth it in exchange for the commonsensical puzzle style that 999 adopts. The puzzles are what can make or break any point and click adventure game, and 999 has some of the most satisfying riddles I’ve solved in some time.

The graphics are largely impressive, considering the kind of game it is. If you were expecting slick animations and gratuitous explosions, then you’ve come to the wrong genre. I’m sure some would criticise the static drawings for being, arguably, too cutesy considering some of the more mature content in the game. This said, I think the graphical direction helps to establish 999 as a game that is able to achieve, both a dense and oppressive atmosphere juxtaposed next to, the occasional light hearted moments of camaraderie. The background details on the drawings are also pretty impressive to boot. The only potentially disappointing side of the presentation is the audio. It’s all of a fairly high standard but, both the sound effects and the in-game music are fairly monotonous. 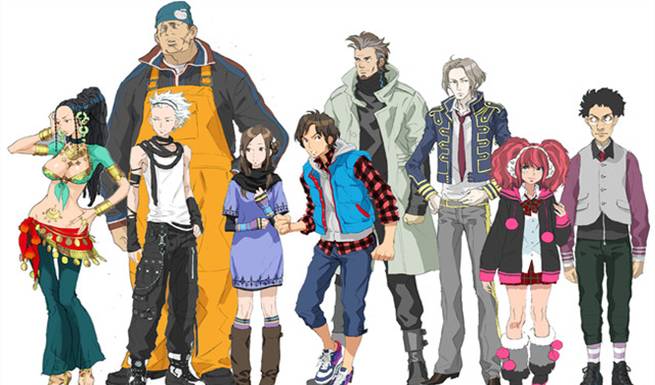 A usual complaint associated with the adventure game genre is the minuscule lifespan and associated linearity of these games. Whilst 999 does subscribe to this stereotype in a sense, with a meagre six hours playtime start to finish, the six endings are all different enough to keep you coming back for more. They extend the playtime greatly and, with the ability to skip through text that you’ve seen before, it isn’t too tedious and off-putting to start the game over to get a better ending. It must be said that the paths to getting each ending aren’t always that obvious, a fact that can be frustrating, but you feel enough of an attachment to the characters that you’ll want to find the perfect ending that will help them all escape in unison.

999 might at times seem more like a book than a game, but it’s a bloody good book all the same. A real page turner, so to speak. It was a game that really came out of nowhere for me, and I can’t believe that no one had told me about it up until now. On paper there isn’t a lot that 999 does to innovate, but what it does it just gets right. It has an engaging and intelligent story that doesn’t treat you like a child or hold your hand the whole way. 999 is the kind of game where I want to grab people by the scruff of their necks, sit them down with a DS and not let them go until they finish it. So don’t make me come over and make you my first victim. Go out and pick up a copy of 999 now.

An engaging story, Three Dimensional characters you get attached to, Logical puzzles that are fun to solve, Multiple endings, Great visuals and art style

Soundtrack can get a little repetitive, Some plot routes are a bit unpredictable, Compartmentalised gameplay can lead to huge amounts of text

Final Verdict:
EDITOR’S CHOICE
An excellent point and click adventure with a Saw inspired story, 999 reaches the pinnacle of the DS adventure genre with clever puzzles, well written characters and a gripping story
A copy of this game was provided by Developer/Publisher/Distributor/PR Agency for review purposes. Click here to know more about our Reviews Policy.