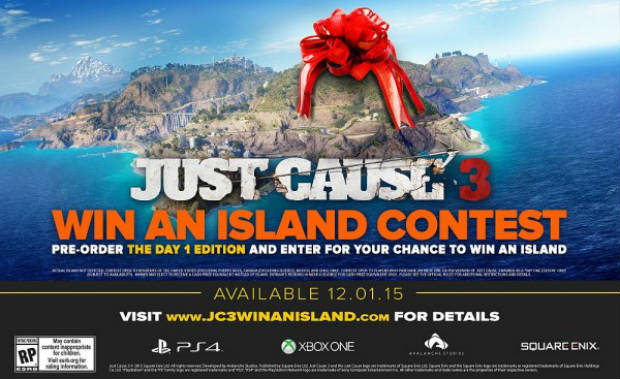 Just Cause 3 is one of those games that looks like it’s going to stand out from the crowd because of it’s crazy concepts and explosive action. It appears Square Enix wants to make sure the game stands out with it’s marketing campaign as well. This week, the company announced that players who preorder the Day One edition of the game will be entered into a contest where they will be competing for the opportunity to win their own island.

Those who preorder the game will also need to score the most Chaos Points in the game once they get their hands on it. In order to rack up Chaos points, you will need to kill and destroy as much as possible using the guns, bombs and even Rico’s grappling hook in the most creative ways. The contest runs on launch day, December 1 for 90 days, ending on February 26, 2015. The player will obviously have to also have an Internet connection in order to log how many Chaos points they are racking up. The top Chaos point collector gets their own island.

For those who don’t want to own a piece of land that might be located thousands of miles away from their home, the company is also offering to just hand you $50,000. The explanation of the award was released by Square Enix and seems somehow fitting when paired with the game. “The island is valued at up to $50,000 or $50,000 cash and the location of island is to be determined by the sponsor.

All taxes and fees associated with purchasing and obtaining of island (including but not limited to attorney’s fees, escrow, and closing costs) are the responsibility of the Winner. Sponsor does not guarantee the island to be inhabitable, developed or reachable by any means other than a boat.” This contest comes on the heels of the announcement that Xbox One owners that buy the game will also get a digital copy of Just Cause 2. Just Cause 3 will be available for the PS4, Xbox One and PC on December 1, 2015.