The greatest strategy game of all time returns, triumphant.

The ’90s were a good era for PC gaming in general, and RTS gaming specifically. PC gaming saw a massive boom during that decade, with companies like id, 3D Realms, Valve, Blizzard, and Ensemble spearheading newer and further advancements in PC gaming, faster and faster.

The last two developers listed, especially, stand out, because they took a burgeoning genre created by Westwood’s seminal Dune II, and they ran away with it, creating some of the best games of all time. Blizzard gave us Starcraft and Warcraft. And Ensemble gave us Age of Empires.

It’s very hard for any modern gamer with more than a passing interest in the hobby to not have heard of Age of Empires. At the close of the 90s and the dawn of the new millenium, the games were, along with Counter Strike, practically synonymous with PC gaming. The second game in the series Age of Empires II: The Age of Kings, stood out as perhaps the greatest RTS title ever released at the time when it first came out, and possibly the greatest PC game ever made. It moved the genre forward irrevocably, and repercussions of what Age of Empires II achieved are still being felt today.

Ensemble, the series, and arguably, RTSs, peaked with Age of Empires II. There have been many games since then, including two follow ups to Age of Empires II, and many more RTSs. But nothing, absolutely nothing, released since then has had the same kind of impact. And with Microsoft officially closing series developer Ensemble Studios back in 2008, it seemed like there was no future for the series anymore.

There probably isn’t. Age of Empires is probably done. But that doesn’t change the fact that it has a past. And what a past it is. 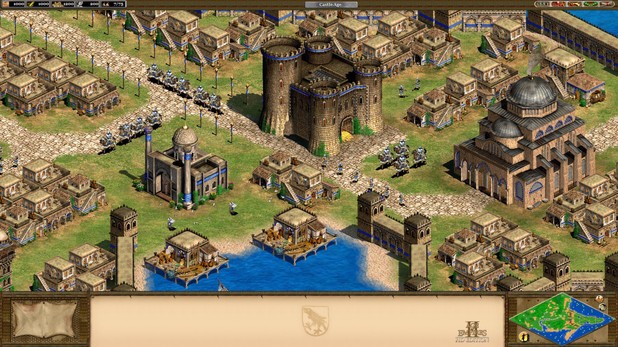 Age of Empires II HD is a remastered and redone re-release of arguably the most important PC game ever released. It includes the original game and its expansion, both reworked so that they will work on newer PCs (Windows Vista and 7’s fancy Aero visual themes broke compatibility with the game), added a new online mode over Steam, as well as Steamworks support (the original game’s online mode is now inaccessible, since Microsoft shut down the MSN Gaming Zone), and added in many new fancy perks and features, such as support for dual monitors and Steam achievements.

The core game itself, functionally at least, remains untouched, aside from the inclusion of some long requested features, such as a higher population cap (now 500 units). In 2013, fourteen years after the original game released, and after multiple subsequent releases in the genre, how well does Age of Kings in fact hold up? Is a lot of its legacy nothing but nostalgia? Or was the game indeed so immaculately designed that it holds up even today?

It holds up. It holds up incredibly well. For people who grew up on this game, the author of this review included, this release will be an incredibly nostalgic blast from the past. You will find yourself sinking countless hours into the game again, as the same old addictive base building/military strike gameplay pulls you in. There have been many strategy games since Age of Empires II, but none quite like it, and almost all of them took the focus away from base building and resource collection, both of which stand as incredibly important features in this game.

Most people perhaps already know how the game is set up. After all, it essentially established the mould for countless strategy games that would come after it. You start out at the dawn of the middle ages- the Dark Ages. All you have is one town center, and a handful of villagers. You represent one of the multitude of civilization of the era- from the Britons, Franks, and Mongols, to the Byzantines, Celts, Japanese, Vikings, and Goths.

There are a grand total of fourteen civilizations to choose from, and each of them is unique. Whereas they all share units and buildings, and even most of the upgrade paths, they each have unique architecture, and some unique units. More importantly, they are all specialized; one civilization, for example, will be able to research advanced architecture techniques to get more hitpoints for its buildings, but won’t be able to access, say, gunpowder technology. Another might get access to advanced naval research, but will find itself locked out of cavalry research. It’s a wonderful balance, and a highly accurate portrayal of the real world, because of course all civilizations were alike, but with different specializations and culture specific quirks. Age of Empires adds to this authenticity by having each unit speak in the native language of its civilization, complete with the proper accent. 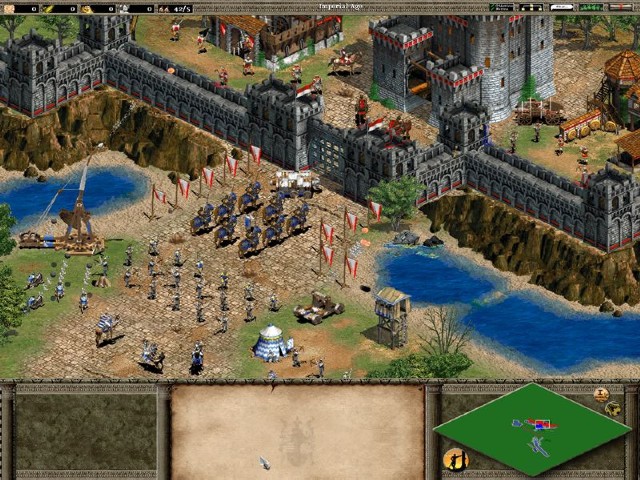 You collect four resources- Food, Wood, Stone, and Gold- from exhaustible sources scattered all around the map. You slowly build up your nation- it starts as a village, turns into a town, and then slowly into a map sprawling empire. You slowly build up a self sustaining economy. You engage in diplomacy with other nations on the map. You build up your military, and research advanced battle techniques. You build a wall to keep the enemy out, you try and capture ancient relics. You research religion, and try to use it to your empire’s advantage. But above all, you try to eliminate the enemy, and win.

Age of Kings offers a lot of intricate depth and strategy to its gameplay, but in the end, when push comes to shove, like in all other RTSs, you must battle to win. And there are so many techniques available to you. You could specialize in siege weapons, which are excellent for taking buildings down, but cause friendly fire, and are susceptible to being dismantled by enemy human soldiers. You can have infantry, who work great against archers; archers, who work great against cavalry; cavalry, that works great against infantry.

You could have siege weapons to back them up, or you could have monks to heal your units and provide support, and to convert enemy units and recruit them. You could have massive warships and galleons and engage in naval warfare. You can research better armor or better weapons for your units. It’s flat out insane.

It’s all here, all of the incredible Age of Empires gameplay. All of the original modes, including Random Map and Regicide, make it here. The campaigns are all here. All the maps are here. All of the civilizations are present. And not just from the original Age of Kings, but also from its Conquerors expansion. Hell, all of the cheatcodes are here. You can, and you will, lose hundreds of hours to this game. And that’s before the multiplayer.

The re-release offers a full suite of multiplayer options, albiet online only. LAN play, which the original game was legendary for, has been removed, perhaps a concession to the fact that LAN isn’t used today all that much anyway. It’s a shame, though. It probably would have been better to keep it included, if only as a nod to the heritage of the original game.

Maybe this wouldn’t have been an issue had the online play functioned properly, but at least as of the time of this writing, it suffers from serious lag issues. Whereas a 2-3 player match occurred pretty much on course and uneventfully, a full 8 player game had some serious stuttering. Hopefully this is an issue that is addressed via a patch soon. Some other bugs, such as hotkey changes not saving beyond a single game, and some bugged enemy AI when it comes to diplomacy, are also noticeable, but none really detract from the experience much, except for the lag in the online play.

The original Age of Empires II, along with its expansion, was seminal. I know I’m using that word a lot. But that’s because that is what that game was. It was a legendary game. Games like that come once, and we got it then. There will never be anything like it again. As much of a shame as that is, we always have that game to play. And with this new re-release, that becomes even easier. And with the re-release priced at an unbelievable $20, the game is a bargain.

It’s funny. Real time strategy games have moved forward a lot in the last decade or so. We’ve had a great sequel to Starcraft (another seminal strategy game, by the way); games like Rise of Nations took the core concepts of Age of Empires and translated them much better to some deeper and more nuanced strategy; Ensemble’s own Age of Mythology and Age of Empires III were excellent games, with great campaigns, and in the case of the latter, adding the concept of persistent progress. Relic has made strides throughout all this time, with games like Company of Heroes essentially distilling the essence of combat in RTSs. The Total War games have become the premier franchise for PC gaming.

And yet, one re-release can somehow harken back to the golden era of the genre better than most new releases can. It just goes to show you how well designed Age of Empires II really was.

Welcome back, the King of strategy games. You’ve been away for a while, and we’ve missed you.