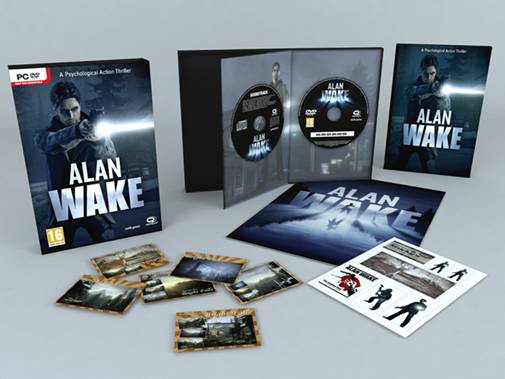 Alan Wake Collector’s Edition will include a Bonus Disc crammed with exclusive content. This includes The History Of Remedy, The Making Of Alan Wake, The Making Of A Thriller, music videos by the Old Gods Of Asgard, several trailers to the game and Storyboard (witch concept art) as a movie clip.

Also included is The Alan Wake Files; a 144-page book with evidence on the mysterious incidents around Alan Wake and Bright Falls, compiled by the fictitious author Clay Steward.

“Both the Standard and Collector’s versions of Alan Wake on PC offer something that gamers have never had the opportunity to own before and we’re delighted to be in a position to be releasing Alan Wake in all its glory,” said Nik Blower, Sales and Marketing Director, Nordic Games. “It’s great to be able to offer real value for money for PC gamers who buy a physical copy of Alan Wake.”

The Standard and Collector’s editions of Alan Wake both include the main game, with optional commentary provided by Remedy (Collector’s Edition only) and both DLCs – The Signal and The Writer – on disc one, while disc two hosts the official soundtrack, comprising 13 tracks.

Alan Wake and Alan Wake Collector’s Edition will be available to buy on PC on March 2nd priced £29.99 for the standard edition and £34.99 for the collector’s edition.