Posted By George Reith | On 16th, Mar. 2011 Under Reviews | Follow This Author @GNReith

You think playing games for a living would be pretty awesome wouldn’t you? When games like Alien Breed 3 come along, this isn’t quite the case. Descent is a game so lacking in engagement and so generally dull, that it felt like a chore to play. I played the original Alien Breed remake back in 2009, but quit out of the demo after minutes realising the game would not justify wasting any more of my time. The third game in the series has done little to improve on this, and I cannot recommend it under any circumstances.

The game starts where the previous games left off. Or at least that’s what the cheap looking cut-scene at the beginning would have us believe. I say cut-scene, but it would be better described as a series of stills accompanied by some mediocre voice acting. The story starts of with our limply characterised hero, Conrad, as he attempts to escape from a ship that has been taken over by a rogue AI and a series of aliens. Does it sound like every sci-fi horror cliché ever? Well that’s because it probably is. 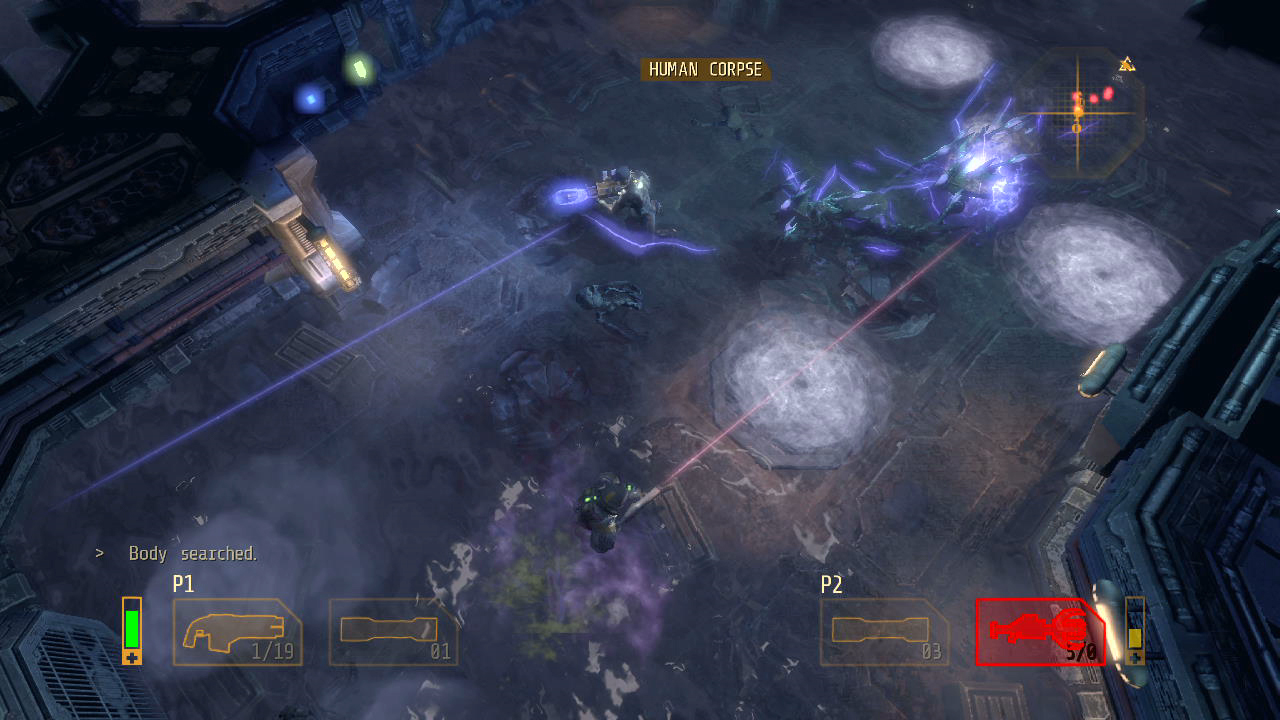 If it wasn’t bad enough that the plot is fairly mindless and hard to get to grips with if you’re a newcomer to the series, the gameplay is equally mind-numbing. It feels pretty much like a standard two stick top down shooter, but with the survival horror elements of limited ammo and health pickups being brought into the equation. There are several problems to, what should be a fairly simple game engine, however. The first big one is the weapons arsenal. There just aren’t that many guns. As nice as it is to be able to upgrade your weapons and equipment throughout your adventure, the upgrades are all ridiculously by the book and the handful of weapons means the action gets pretty dull pretty quickly. Compounding this is some appallingly linear level design, with some really backward objectives to complete. So much back and forth goes on in Descent, that I started to feel like a lap dog playing fetch. And I didn’t like it.

There are also several elements that just make the game plain awkward. During the course of your Alien Breed play through you’ll acquire a variety of items, from grenades to armour and health packs. The problem is that the inventory management is needlessly frustrating when you’re trying to access items on the fly. You can only cycle through items one at a time and, often, during the intense fire fights you’ll be launching grenades instead of healing yourself and vice versa with irritating regularity.

There are also camera issues that impede your progress. You are given control of the camera via the L1 and R1 buttons but, putting the liability upon the player makes combat sections in the game annoying. No matter how you point the camera, you constantly feel you can’t quite see the whole picture. But not in the “oooh what’s coming next” sort of survival horror way, but more in the “oh crap I died again” vein. Boy, does it get old fast. 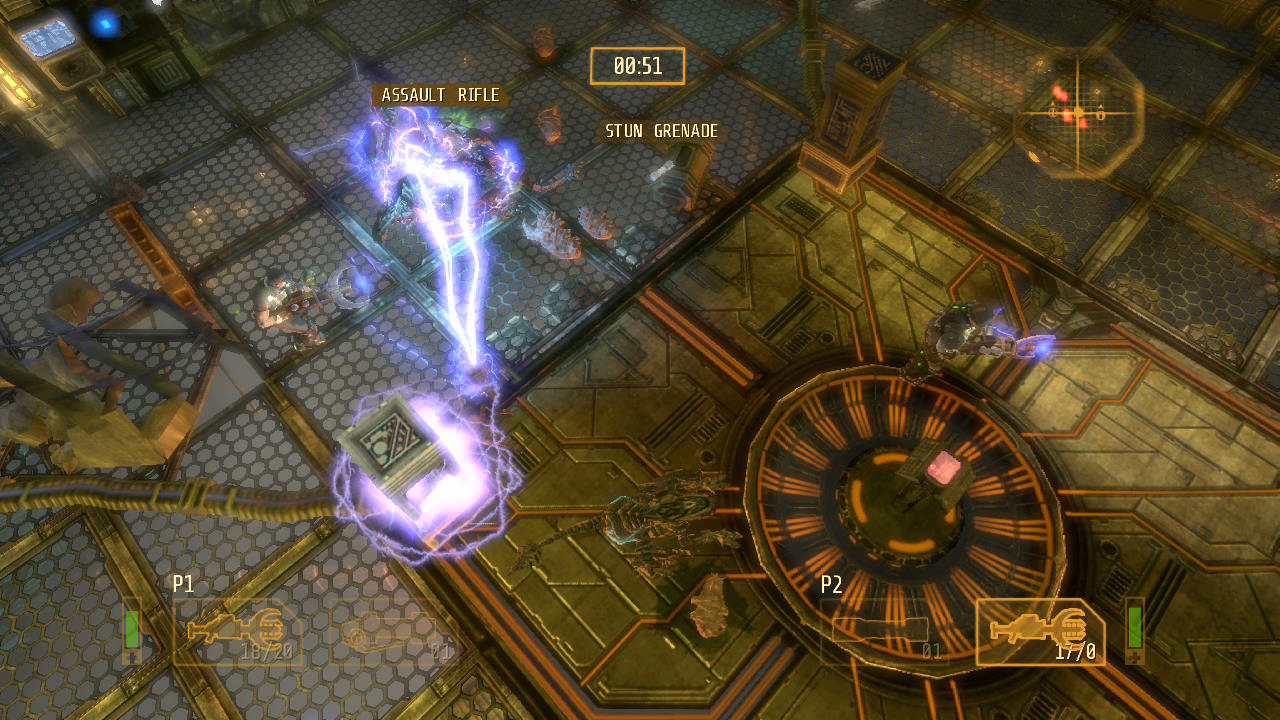 The camera is more annoying than it looks

In general, the frightening elements of Alien Breed are relatively well complemented by the game’s comparatively high production values. The graphics are generally solid for a downloadable title. They are marginally let down by some drab level textures, though going outside the ship for the first time in the series was a novel highlight. The sparse soundtrack also ups the game’s tension, with the familiar assault rifle sound effects actually sounding pretty satisfying. The problem is with the voice acting for, even though it is rather unimpressive during the game’s “cut-scenes,” the fact that it just drops out mid-game seemed cheap. The problem with the game’s immersion is little to do with poor production values, and more to do with poor gameplay pacing.

If you do happen to fall for the frustratingly old school charm of Alien Breed 3, you’ll be pleased with the amount of content on offer. For your paltry $9.99 you get your relatively long single player campaign, a series of survivor missions and an accompanying set of co-op levels as well. The co-op can be played online (more hassle than it’s worth) or locally, provided you are on the 360 or PS3 versions. The co-op is generally poor with frustrating split camera issues, but it is a pleasant addition all the same. There are also a copious amount of achievements/trophies to go through, which will increase your playtime invariably if you attempt to hit up that elusive platinum. 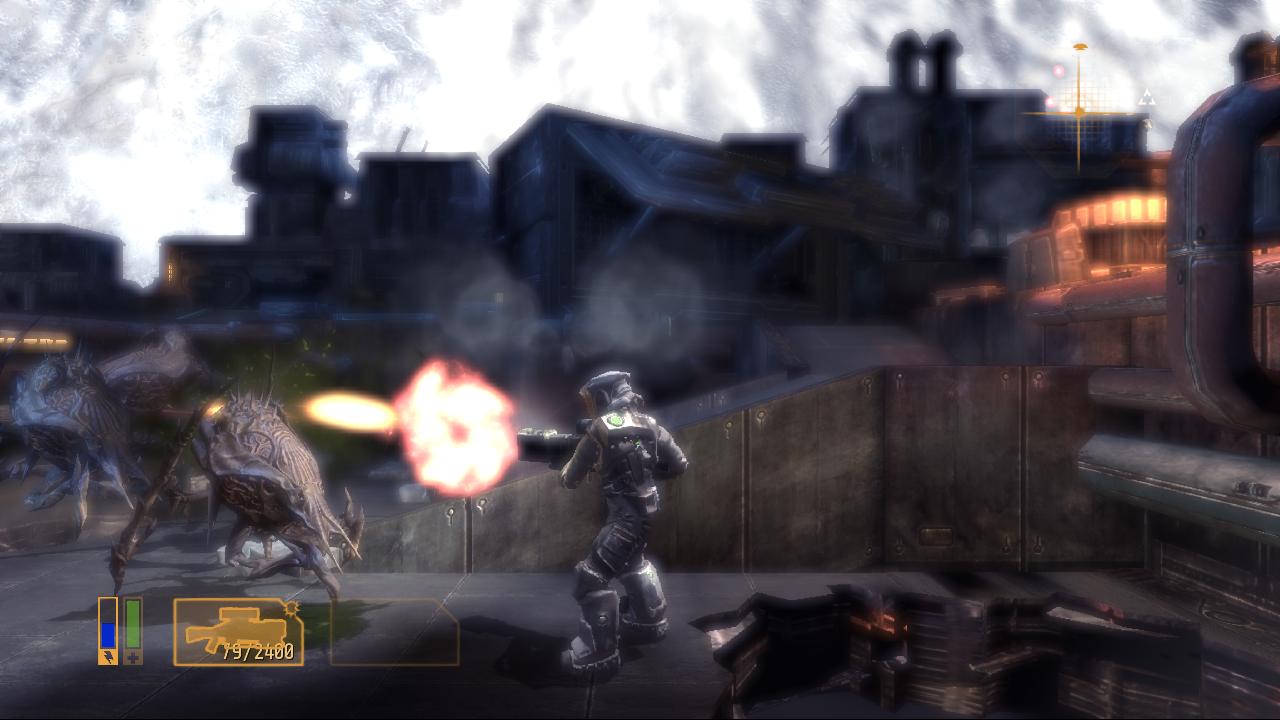 Getting away from enclosed corridors was a short lived, but enjoyable, novelty

Alien Breed 3 does have its good qualities. Sadly though, there is nothing gripping or original about the game to keep playing. Ten years ago this may have been standard, but nowadays we have so much choice and quality within our industry that lacklustre titles like Descent just can’t compete any more. Descent is not a terrible title and is not entirely without merit, but there are other games out there far more deserving of your time and money.

Well used audio, Sound visuals, Easy to get into, Lots of content

An awkward and bumbling blast from the past, Alien Breed 3 made me wish that I could just forget it all. Generally decent production values are let down by dull gameplay and poor pacing

A copy of this game was provided by developer/publisher for review purposes. Click here to know more about our Reviews Policy.
Tagged With: Alien Breed 3: Descent