This alien blasting twin-stick shooter is as tedious as it sounds.

Alienation is about as bland, boring, and predictable as a title can get. In that regard, it’s perfectly fitting for the game. Made by the developers of Super Stardust and Resogun, Housemarque, Alienation is a game that will make you wish you were playing those games instead.

Rather than those previous twin stick shooters, Alienation goes with a more story and gameplay based route. Aliens have invaded Earth, a world government called the UNX formed to fight them, but resistance is seen as an increasingly lost cause. You’re then sent to a world where you’ll have to choose one of several hotspots to attack or defend using an array of upgrades and a leveling system.

If any of that sounds familiar, it’s because Alienation is a complete rip-off of XCOM Enemy Unknown in every way. The only difference is the lighter focus on strategy, and the emphasis on Housemarque’s age old twin stick shooting gameplay. That’s all it has going for it, as the rest of the game plays like a lazy clone of not only XCOM, but every popular 3rd person shooter that crammed in unnecessary RPG elements. 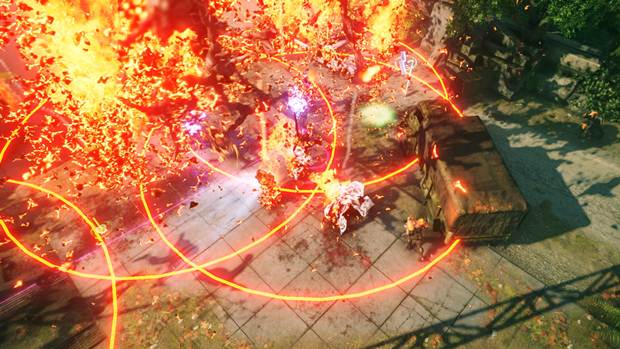 "While XCOM’s story wasn’t the most innovative or in-depth narrative in gaming, it felt like the developers at least tried. Here, the story is as barebones as you can imagine."

While XCOM’s story wasn’t the most innovative or in-depth narrative in gaming, it felt like the developers at least tried. Here, the story is as barebones as you can imagine. There are aliens trying to take over the world, and you – a random person with a gun as far as we know – must stop them. A government agent and a scientist constantly talk to you throughout missions, serving only to spit clichés with as much enthusiasm as you’ll have before long.

The gameplay, meanwhile, is equally paint by numbers. There’s a leveling system in which you can acquire certain abilities like healing, stronger melee attacks, and increased speed. These abilities are split between active and passive levels, and you gain points for them separately. You can also collect materials in the field or by scrapping extra weapons to get other unique abilities. There’s no reason to ever keep weaker weapons though, as each new weapon is objectively better than the previous. There isn’t much variety amongst the abilities or items to create either, and more often than not it feels like a waste of time.

There are three classes to choose from at the start of the game. There’s a basic tank unit that deals a lot of damage and can equally take a lot, a medic/specialist class that’s fast and has all kinds of unique abilities, and the basic soldier class. Each class has their own abilities and general weapon loadouts that can be boosted and added to as you progress through the game. But level ups are slow, even early on, and none of the abilities are necessary to use. As a result, each class feels the same, except for the tank soldier, if only because they have slightly more health.

Because of this, you’ll stick with your basic weapons and maybe one or two abilities like healing throughout the game. There are also other power ups you can find like any other game in the genre that’ll make leveling up almost pointless, like health packs, new weapons, and speed boosts. You’ll need those pickups too, because the game is not well balanced. It’s not unusual to walk through an empty area, picking your nose, and suddenly be surrounded without any idea where the aliens came from. They can spawn anywhere, behind cars, scenario, and off camera. They’re faster than you as well, so it’s difficult to outrun them. 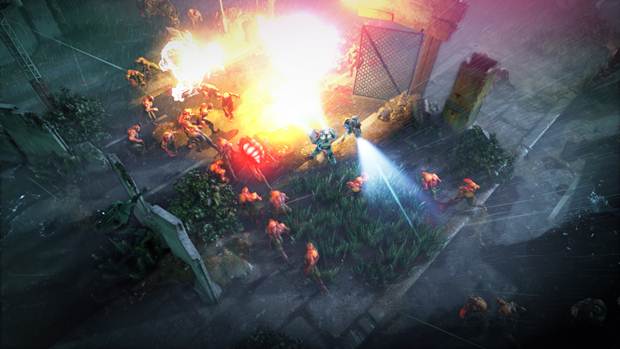 "The AI leaves a lot to be desired. Most enemies will run straight at you, and the ranged enemies will stand in place."

You can see Housemarque was at least trying to bring some balance however. Basic aliens go down in one hit, and the bug-like enemies that burst out of eggs can be destroyed before they hatch. There’s also a speed reloading mechanic like in Gears of War, in which you can reload faster if you time it right. There’s no penalty if you fail though, you’ll just reload as you normally would. Enemies go down fast, most going down in a single shot, and the toughest can only take three or four shotgun blasts. It doesn’t matter when you’re not surrounded, but when you are it can feel like you spend more time reloading than shooting, even when you do time things correctly.

When you’re not totally surrounded, it can be very easy to shoot down one or two enemies that get in your way, or bypass whole groups entirely without them noticing you. Sometimes hordes of enemies will approach you from one side, and whenever this happens the best strategy is to lead them in a conga-line to the nearest car and blowing it up.

The AI leaves a lot to be desired. Most enemies will run straight at you, and the ranged enemies will stand in place. This kind of AI is a staple of the genre, where enemies are more akin cannon-fodder than a strategic threat. But in a game that’s trying to masquerade as something more, it defeats the point of the upgrades and leveling. No matter what you do, you’ll eventually be surrounded so the stealth upgrades are pointless, and since most enemies go down in a single shot, there’s no need to invest in dealing more damage.

The difficulty seems to change arbitrarily and at random. Bringing up the menu is the only way to change your primary and secondary weapons and to level up. However, the game doesn’t pause when you go into the menu, even in single player. Thing is, there’s no indication of this, because the menu will obscure the entire screen. When you play the game for the first time, you’ll have no idea the game is still going in the background until you hear your character screaming in pain. Even when you do find an isolated area to perform item management, it’s not at all unlikely that enemies will appear out of nowhere and swarm you, leaving you dead before you realize what’s going on.

Enemies respawn whenever you die, and if you didn’t activate a respawning station you’ll be thrown back to the beginning of the level. You’ll keep your experience however, and your ammo will refill, not that it’s ever a problem anyway. Having to plow through the same waves of enemies in the same uninspired levels using the same weapons proves just as tedious as it does difficult. 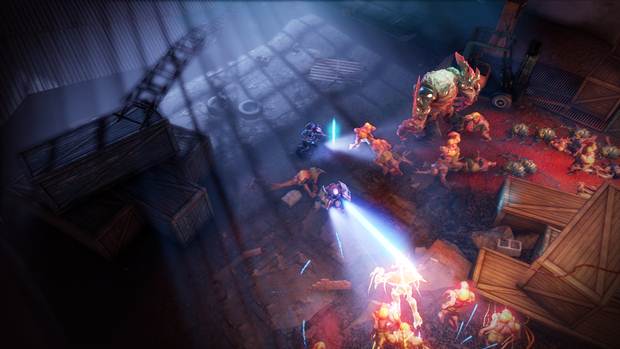 "There isn’t much to say about Alienation. It’s an uninspired shooter that’ll kill an hour or two before tedium sets in."

That’s the main flaw with this game. The core of it isn’t fundamentally broken, it’s just boring. You play in levels that all look the same, fight the same enemies that have the same two kinds of attacks, using the same basic weapons. With no new gameplay variations ever presenting themselves and the pointless leveling system, you’ll see all there is to see of the game in the first two levels. It’s the kind of game you stop not long after you start and wonder if you’ve played it before and forgot about it. It tries to make itself more difficult to compensate, but its arbitrary up and down nature is more frustrating than fun.

There are a few bugs and glitches and other technical problems too, though nothing major. I was going through one level when I died near the middle of the stage. Instead of spawning at the last respawn point I unlocked, I somehow teleported to the next objective near the end of the level. There were also a few instances of my bullets clearly going through enemies without doing any damage.

Audio balancing is another issue. The dialog from the bored sounding scientist and government agent is at a low volume and can barely be heard, even as the rest of the game’s volume lowers. Your gun also beeps every time you reload as well, and the sound comes from both the TV and the controller’s speaker. The beeping is incredibly high pitched and very loud, and due to the high amount of enemies, you’ll be reloading constantly. Eventually the beeping will drive you to listen to U2 if only it’ll stop. Or you could turn off the audio from the controller speaker.

There isn’t much to say about Alienation. It’s an uninspired shooter that’ll kill an hour or two before tedium sets in. It’s a game made to attract a larger audience with RPG elements, but it also wanted fans of Resogun and Super Stardust, so those RPG elements were made almost optional. The final product is a watered down toy box lacking both the charm of Housemarque’s previous titles and the depth to attract new fans. It might be more fun to play with friends, but what game isn’t?

Aside from a few bugs and audio problems, the game is well presented. It might not push the PS4 to its limits, but the particle effects and lighting makes an otherwise dull looking game quite pretty. It’s easy to play co-op, either with a friend or another online player at the start of each level. At times it can be plain old-fashion fun being swarmed with enemies and blasting your way out with almost no health and a handful of bullets.

Alienation isn’t anything special, looking and playing more like a game trying to clone another than an idea born of passion. The added elements like RPG leveling, character classes, and loot/material system all seem tacked on and utterly useless. The difficulty rises and falls at total random, and those changes are usually arbitrary and unfair to single players. A lack of any new features or gameplay mechanics makes the game get stale quickly.

Final Verdict:
AVERAGE
Alienation isn’t a terrible game by any stretch, but it’s not great either. It’s monotonous and lifeless, but can entertain in short bursts and with friends. Housemarque has done better in the past, and they should have done better here.
A copy of this game was provided by Developer/Publisher/Distributor/PR Agency for review purposes. Click here to know more about our Reviews Policy.