Aliens Colonial Marines’s final release will not feature a horde mode. It’s something that pits you against waves of enemies, which Gears of War 2 popularized.

It’s not confirmed why the mode is not in the final game but it has now been confirmed that it will be released later. We also have the pricing and release date for this horde mode for Aliens Colonial Marines.

They were leaked via Wallmart front board and the details were posted on Gearbox forums.

The game will be released on February 12th and a Wii U version is also confirmed. We have created a comprehensive wiki for the game which you can check out here, and it will give you more information about the game. 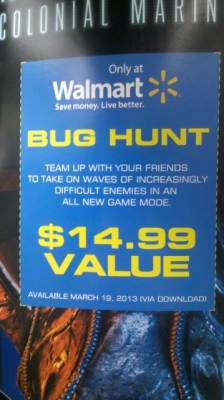