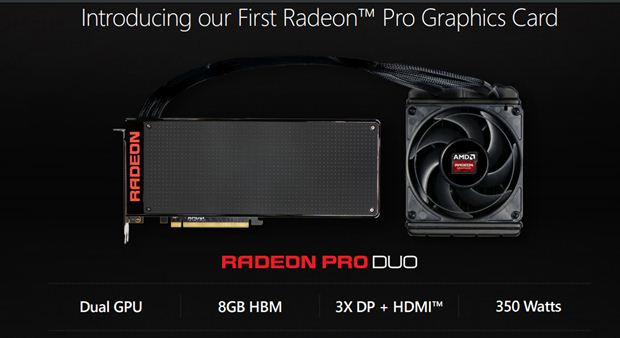 AMD announced the launch of the Radeon Pro Duo today. The massive dual-GPU card features a pair of their Fiji GPUs—seen in the Radeon Fury lineup—paired with a massive 8 GB of HBM memory. AMD touts the card, offering a staggering 16 teraflops of raw compute performance, as the world’s fastest graphics card. At $1499, the price-tag certainly fits that description.

Core clocks see a rather substantial reduction compared to a single Fury X, with the Radeon Pro Duo press deck quoting the core clockspeed coming in at “up to 1000 MHz.” As seen with the R9 Nano, “up to” leaves quite a bit of wriggle room, and we expect the core clock to fluctuate in the 800-900 MHz range, as seen in the R9 Nano, on account of the 350W TDP limitation. That being said, not one, but two Fiji GPUs on the same board is nothing to sniff at, and with no dual-GPU Maxwell SKU from Nvidia, the Radeon Pro Duo may well be the world’s fastest card until AMD and Nvidia bring their next-gen offerings to the market later this year.

Branding is where the Radeon Pro Duo gets really interesting. AMD’s dropped the “Fury” moniker here suggesting that the card isn’t targeted towards gamers—this is a nod towards their Firepro workstation cards. The press deck describes the Radeon Pro Duo as being targeted towards “VR Content Creators,” making this more of a prosumer product along the lines of Nvidia’s Titan line—the Radeon Pro Duo will definitely provide top-of-the-line gaming performance, but price/performance-wise, it can also double up as a formidable workstation tool, especially considering the kind of performance high-end VR experiences require. AMD’s promoting LiquidVR through the Pro Duo, as an integrated platform for VR content creation and consumption.