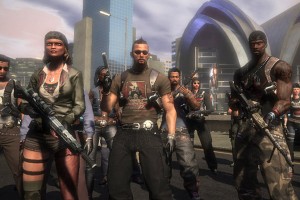 Key Features of the Update include

• Weekly Challenges added to the Fight Club zones. Players can now compete for several tiers of prizes using entirely new, heart-pounding game modes.
• New Progression Contacts in the game, handing out new player levels and the very latest experimental gear and gadgets. By finding them, players can earn themselves cool new virtual gear.
• New Mods and Features can be picked up from the new Contacts, bringing new capabilities to players including increased inventory, radar jammers, recoil decrease, opponent tracking and the ultimate high-tech way to lock vehicle speeds at MAX.
• Combat has been enhanced with new marksmanship and mobility modifications and sweet new weapons.
• New Custom Clothing Sets including this spring’s ‘must have’ Paramilitary rig.
• New Vehicle Kits for both Criminals and Enforcers. Players can cruise in style and smash into buildings and opponents while looking even cooler than before.

“New Breed Part 1 is a major step forward for APB Reloaded. The team has been listening to players’ feedback and making sure that every update makes San Paro a more incredible place to play”, says Michael Boniface, General Manager of Reloaded Productions.