The finely-tuned combat and stylish execution make Arcadegeddon an undeniably good time despite it lacking the creativity to fully utilize its own themes.

In a last-ditch effort to save his beloved and popular local arcade from an evil mega-corporation, Gilly enlists you and whoever else will help to save his newest game from the viruses implanted by said evil mega-corporation. In Arcadegeddon, you’re on the front lines of the last hurrah for hometown arcades in a strange world full of lively characters, wacky levels, some surprisingly enjoyable gunplay, and a handful of other little touches that really help flesh out the experience quite well. The game has been out for about a year now on PC but now is coming to consoles along with cross-play functionality, and I’m reviewing the PS5 version here.

The slightly long-winded tutorial phase aside, Arcadegeddon seems intent on keeping you in the action as much as possible with a contracted hub world and efficient system of accepting multiple challenges at once and diving into the game’s levels to start chipping away at them. At its core, you have a fairly standard third person multiplayer shooter. The PvE wing of the game is an adventure mode that has you going up against the corrupted beings that are infesting Gilly’s game throughout several levels while accomplishing different challenges from the folks hanging around the arcade. This mode is the bread and butter of the experience with fast and kinetic combat and amusing weapons to toy around with. It plays a lot like most rogue-lites you’ll find out there, with different runs randomizing locations of things like chests as well as what’s in them, and starting you over when you die, but Arcadegeddon does have a level of polish and style that you don’t normally see at the 20-dollar price point.

"It plays a lot like most rogue-lites you’ll find out there, with different runs randomizing locations of things like chests as well as what’s in them, and starting you over when you die, but Arcadegeddon does have a level of polish and style that you don’t normally see at the 20-dollar price point."

Enemy, weapon, and level layout variety do stop short of being amazing, but they are quite good and kept me engaged pretty consistently during my sessions with the game, which always seemed to last a little longer than I was planning. Shooting feels great and compliments the snappy movement well. Different weapons definitely work better against different enemy types, and you will get plenty of chances to experiment with higher level weapons and elemental infusions, but overall, you can’t really go wrong in the arsenal. The weapon types themselves bring little to the table that you haven’t seen before, but the variety within those conventional restraints is fine. It gets better after you pick up a few powerups like increased blast damage for rockets or quicker firing rate for sniper rifles, though.

I quickly found my favorites, but I can’t say I ever discovered anything that I didn’t like at all. This combined with the snappy mobility makes a very kinetic, well-rounded and satisfying combat experience that is perhaps the brightest point of the entire game. Even if the average enemy variety or contrived mission objectives don’t blow you away, the shooting itself will always keep things reasonably fun. I can’t say much about the PvP mode other than it seems to exist. PC players have been enjoying a variety of modes within the PvP wing of the game for a while, so it’s probably safe to say that those experiences will translate well over on the PS5.

The presentation of Arcadegeddon is a familiar look, especially in the rogue-lite multiplayer space, but it does have its own twist that might remind one of Osmosis Jones or even the old TV show Reboot before it reminds you of its competitors in the genre, which, as far as this genre goes, is pretty refreshing. I found the character designs as well as the general aesthetic of the game to be really likable, especially with how well it’s used in the game’s customization store and with the handful of characters hanging around the arcade that you will inevitably get to know better as you play. It’s also mixed up nicely by the level variety, which, again, isn’t outstanding but more than gets the job done with different level styles, color pallets, and just enough wackiness to feel like your video game character is in a video game of their own. 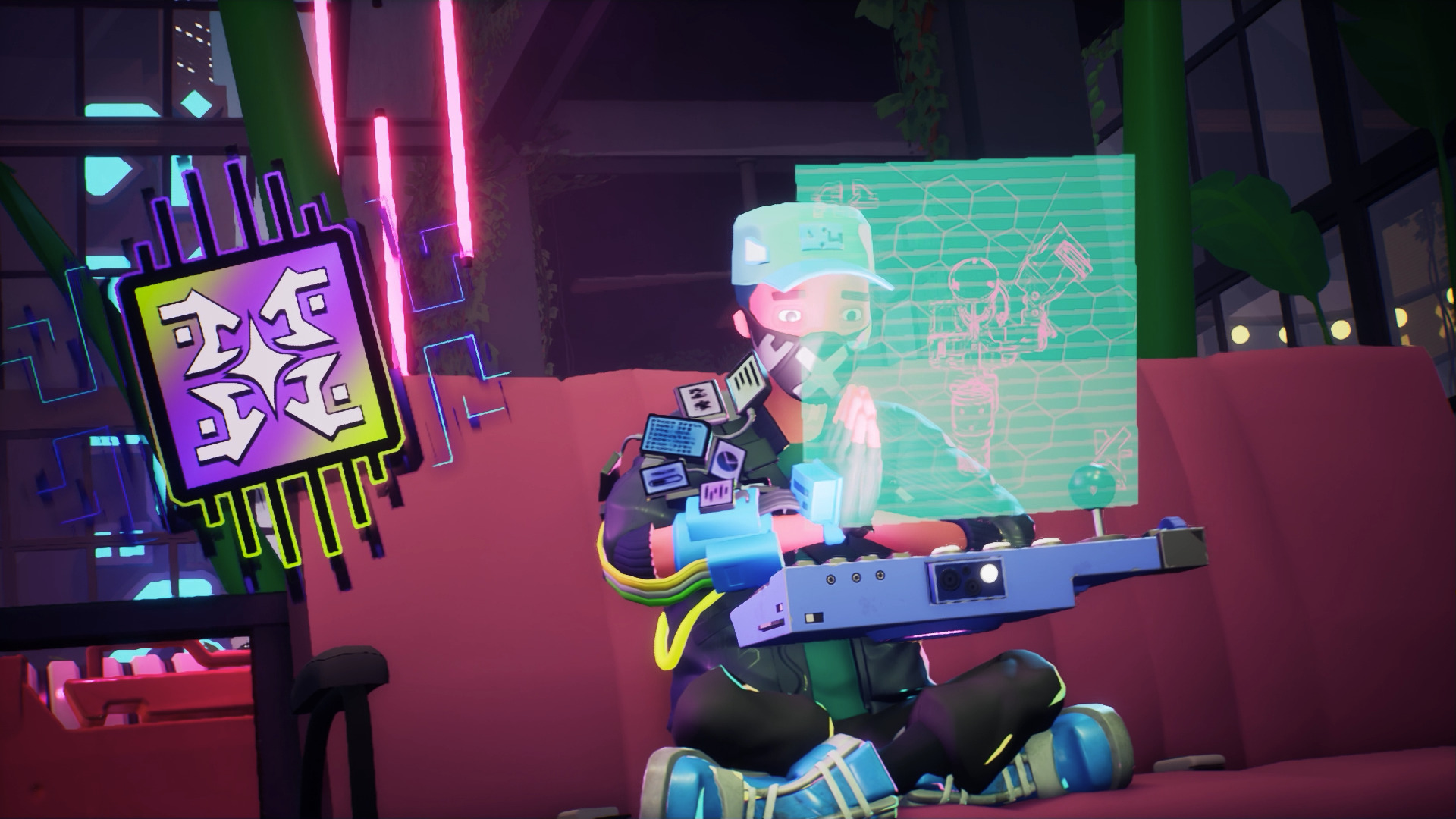 "The presentation of Arcadegeddon is a familiar look, especially in the rogue-lite multiplayer space, but it does have its own twist that might remind one of Osmosis Jones or even the old TV show Reboot before it reminds you of its competitors in the genre, which, as far as this genre goes, is pretty refreshing."

The motif of being two layers deep in a video game is played up a little bit in some ways, like using continues and how different characters acknowledge the progression systems of the game itself like it’s a part of their lives, too. I would have liked to see a little more of that given the setting of the game, as just passingly acknowledging it feels like a missed opportunity to really get as much out of that as the experience could’ve.

I also would have appreciated a bit more movement with the central plot, as the game does go through all the effort of setting up a cool world with an engaging conflict between the little guy and a massive corporation – but then kind of just sidelines that and focuses on standard multiplayer gameplay mechanics. Those mechanics work fine for what the game is, and the gameplay itself is good, so it’s not a huge blunder, but a more well-paced unfolding of the narrative would have really sealed the deal for me.

Along with cool graphics is some truly outstanding music. I’m not sure what you would call it, but it mixes in some fundamentals from different branches of pop and electronica with lo-fi beats, dreamy shoegaze, and heavily processed staccato synth parts that form a energetic sound that, while not quite my personal cup of tea, does undeniably elevate the vibe of the game in an authentic way. Some may find themselves turning it down after a while as it can be quite a lot to process, but I ultimately ended up enjoying what the soundtrack does for the overall tone of the game. 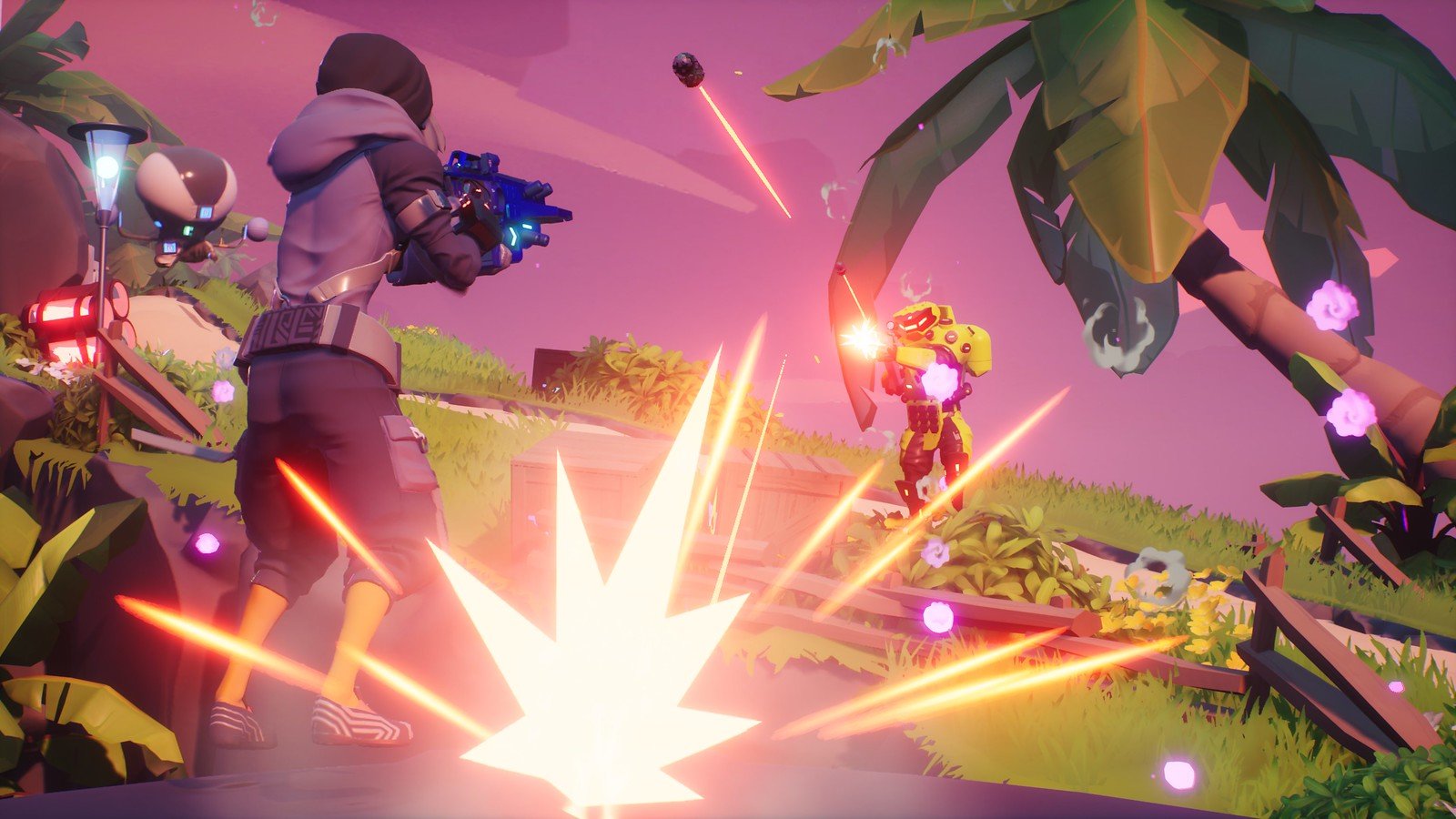 "In a space as crowded as the multiplayer rogue-lite shooter genre, you better come correct if you’re going to take a stab at carving out your own audience. Thankfully, Arcadegeddon mostly does just that."

In a space as crowded as the multiplayer rogue-lite shooter genre, you better come correct if you’re going to take a stab at carving out your own audience. Thankfully, Arcadegeddon mostly does just that. While its central theme of standing up to modern sensibilities with creativity and uniqueness is somewhat undercut by the fact that Arcadegeddon’s own gameplay largely just ends up catering to modern multiplayer expectations, it’s something that is pretty easy to ignore most of the time. The combat comes in swinging with tight and speedy action. The cantankerous enemies and bosses are a blast to take on, and the perpetual loop of accomplishing newer and bigger challenges while improving on each and every run almost immediately falls into place.

On top of that, it runs like a dream on the PS5 and I encountered no notable stability issues that I can recall. For 20 bucks, it’s a pretty solid package. I wish there was perhaps a tad more meat on the bone with the narrative and more of a willingness to buck current trends with its conventional weapons, level layouts, and overall structure, but if you’re looking for a slightly different spin on this tried-and-true format, you could certainly do a lot worse than Arcadegeddon.

Final Verdict:
GOOD
Arcadegeddon has solid gun play mechanics and a setting that most will appreciate but its generic structure and lack of enemy variety hold it back from truly shining.
A copy of this game was provided by Developer/Publisher/Distributor/PR Agency for review purposes. Click here to know more about our Reviews Policy.