Being a big fan of cricket, it was a no brainer for me that I had to pick up this game. After seeing some of the initial screenshots and videos of the game, I had the belief that this will be the best cricket game to date. And yes after the playing the game for 30 odd hours or so, I must admit that my previous predictions were all true. Ashes Cricket 2009 is game that every cricket fan should pick up.

Now lets talk about the gameplay which makes this game so addictive. The game will start off by giving the player a number of options to choose from. Obviously if you are someone from the west than your best bet will be to dive straight in to the “Legends Training” mode. This mode is nothing but a series of tasks given by cricket legends Shane Warne from Australia and Ian Botham from England with each handling the bowling and batting training modes respectively. I believe this mode gives enough insight on the game to all type of players. Whether you are a hardcore veteran or a new comer this mode will take care in getting you ready for the game. So once you are done with the training, its time to play the real deal. 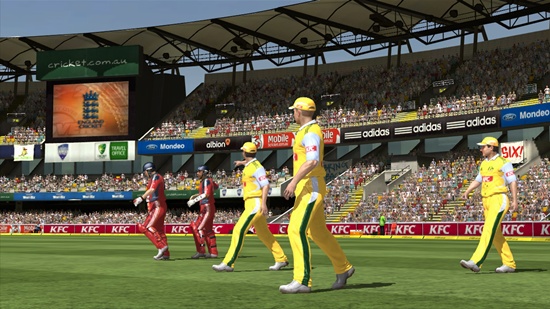 Are you ready to face the music?

Once you are back to the main menu, you will be given the options of playing an exhibition match, a tournament , one day internationals, test matches, T20’s and test matches. So as far as the modes of cricket are concerned, this game takes care of that in every respect. So when you select your team, you will be shown a short animation where the two captains are standing on the pitch along with the umpire and depending on your luck you will either loose the toss or win it. Obviously as a big fan of cricket, I always preferred the batting elements of the game. Batting in the game is a ton of fun and the variety of shot selection and the freedom given to the bats man is amazing. You can cover drive, play pull shots, dance down the wicket, hit lofted shots and even employ the cheeky Chinese cuts along with the ever popular reverse sweep. So the range of shots you can select is pretty vast. The satisfaction of hitting a boundary or a towering six, or running and diving across for a quick single is brilliantly represented in the game. There are a couple of issues with the batting, first being that when you dance down the wicket and if you miss it, you have to press the corresponding the button to go back. I found this a bit unnecessary since I believe the developers themselves could have implemented the AI required to do that. Other problem that I faced is that batsmen don’t respond too well when the player decides to take a delayed second or a third run. This in turn caused many unnecessary run outs in the game. 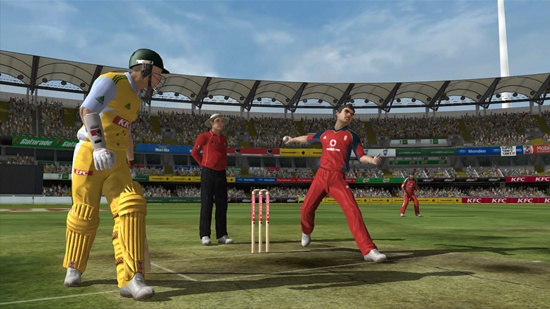 Bowling is a ton of fun, if mastered.

The bowling in the game is pretty much on the spot. However I must say that it is pretty hard to master the art of bowling in the game. This issue has been plaguing the franchise for a long time and I believe its high time the developers implement something which is easy to play yet being challenging at the same time so that the fun factor doesn’t get reduced. Depending on the team you select, you will have an array of bowlers ranging from really fast quickies to slow medium bowlers. Also the variety of spinners to be found in the game is exemplary. Most of the bowlers now don’t have the same action as found in the previous games. So every time when I faced or employ the same category of bowler, I never felt that I was facing the same one again and again. Just like the batting, bowling too has a lot of options. You can get the in and out cutters going, bowl a slower one or pitch it up right in the block hole. Fielding is pretty simple and straight forward. However taking catches requires the player to press the corresponding button on the screen at the right time.Overall the most important elements of Cricket have been very well implemented and is truly the heart of the game. 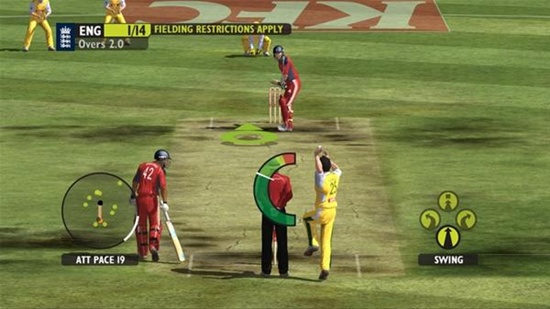 The action is truly scintillating!

Visually the game is pretty impressive, but only when the action is going on. People can get easily duped in to believing that this not a game but two teams battling it out in real life. Sadly though when the camera snaps in closer on some of the players, the players look bland. Again just like the players, the stadiums look great from far, but the people sitting in them look like character models from the late 1990’s. Camera is one of the high points of the game.The way the camera snaps to action looks very natural and really gets the player to get more involved with the game. Sound is OK, for most of the part. Being a cricket game I was not expecting great music but whatever is there gets the job done. However the commentary is a let down for me. Big names like Tony Greig, Shane Warne and Ian Botham have given their voices, but mostly you will see the same sentences being repeated again and again. Unfortunately, this game again had licensing issues. The game only has the license of Australian Cricket Board and English Cricket Board, but the game does give the option of changing the players name, attributes and likeness.

Ashes Cricket 2009 is not a game without issues. It does have a number of them, but the important thing over here is the gameplay, which truly shines over all issues that I encountered in the game. Ashes Cricket 2009 may not be the revolutionary cricket game that many might be expecting, but it gets the job done. Gamers (like me) who are fans of cricket should not pass it up.

Batting is a lot of fun, Bowling options are numerous, Best animations in a cricket game yet, Manual catching is a nice feature, Camera angles are great.

Commentary has been recycled from previous games, Only Australian and English licenses for the game, Higher difficulty modes are unforgiving.

Final Verdict:
SUPERB
Ashes Cricket 2009 is the most proper representation of the gentleman's game.
A copy of this game was provided by Developer/Publisher/Distributor/PR Agency for review purposes. Click here to know more about our Reviews Policy.