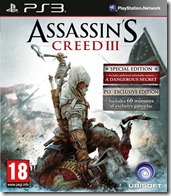 If you buy Assassin’s Creed 3 on day 1 from any store or online marketplace in India, you will get the limited edition instead of the standard edition.

They contain additional DLC and we have listed them below. E-Xpress Software the distributor notified us about the contents in each version of the game.

The special edition for Xbox 360 will included an unlockable content called — a Dangerous Secret; and the PS3 version contains the same content along with 60 minutes of exclusive gameplay missions.

There will be four exclusive missions for the PS3 which tells the story of American Revolutionary traitor — Benedict Arnold. We have posted the trailer below of the DLC.

The game will be available on 31st October for Rs 2799 through E-Xpress, so what are you waiting for pre-order now or pick it from the store because the game has a midnight launch in Mumbai and Delhi.