"PC has a special patch designed to ensure that everything runs as smoothly as possible." 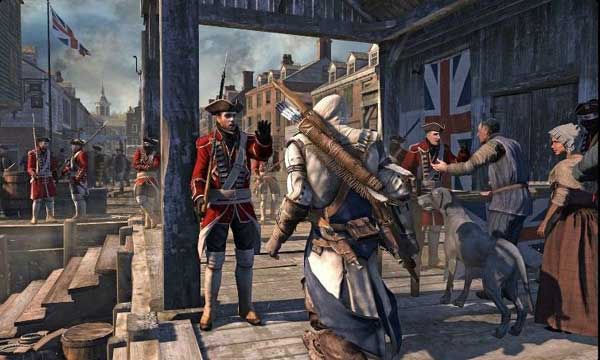 Those of you who’ve played Assassin’s Creed 3 would know that the Xbox 360 and PS3 versions of the game were full of bugs and glitches. However, Ubisoft wants to assure you that the upcoming PC version will not be as messy.

“[The PC version] will include all of the console patches out at the time (so, that includes any patches we might be releasing in between now and PC launch),”  Gabe Graziani, part of Assassin’s Creed 3’s community team, said during a Reddit Q&A session. “In addition, PC has a special patch designed to ensure that everything runs as smoothly as possible.

“We’ve added extra DX11 support for the PC version, so you’ll notice some significant increases in texture resolution (double-res in most cases, but quadruple in some), tessellation (which is like, the new DX11 hotness) and some other shader improvements that will have an impact, but aren’t all that sexy to enumerate in a Reddit post, hehe.

“I would say it will be less buggy than the console versions at console launch, but that the console and PC versions will be comparable at PC launch.”

He also added that the console patch, which will be releasing next week, will see to fa requests that Connor’s hood is raised in the post-game content.

We will be patching and tweaking for a while yet and soon enough we will be changing the end state of the game to be hood up!” said game director Alex Hutchinson.

He also talked about how people initially thought that the game’s story would have an anti-British bias.

He said: “We started laughing then we were depressed as we realized nobody would believe [we weren’t biased] until the game shipped.

“Then we felt validated when it did ship and most people noticed, then we were depressed again when we realised all the people who carried on about it before we shipped weren’t going to say sorry. ;)”