Assassin’s Creed 3 vs Revelations: A Visual Comparison — How Much Has The Series Evolved?

How much has the series evolved since last year? We try to analyze. 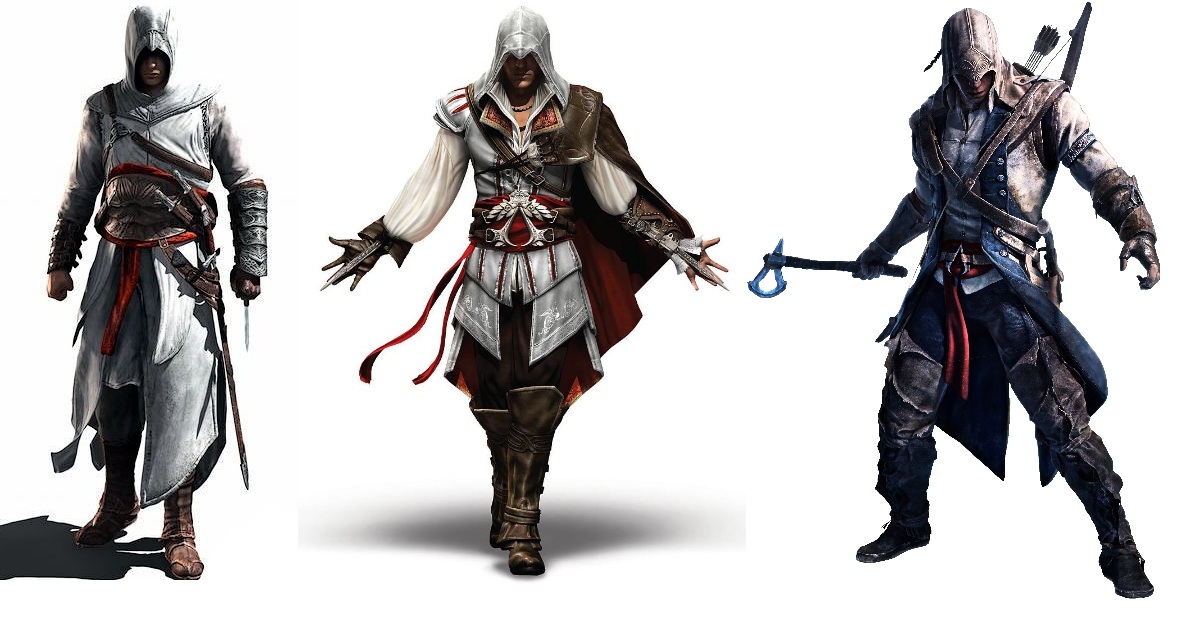 In this feature, that is our main concern – how much Assassin’s Creed 3 bring to the table when it comes to the visual department, but we will also be looking at other things.

Below, we will be comparing Assassin’s Creed 3 with Revelations via visual comparisons and determine how different the two are from each other.

The images on top are from Assassin’s Creed 3 while the ones on bottom are from Revelations. Click on the images to view them in full size. 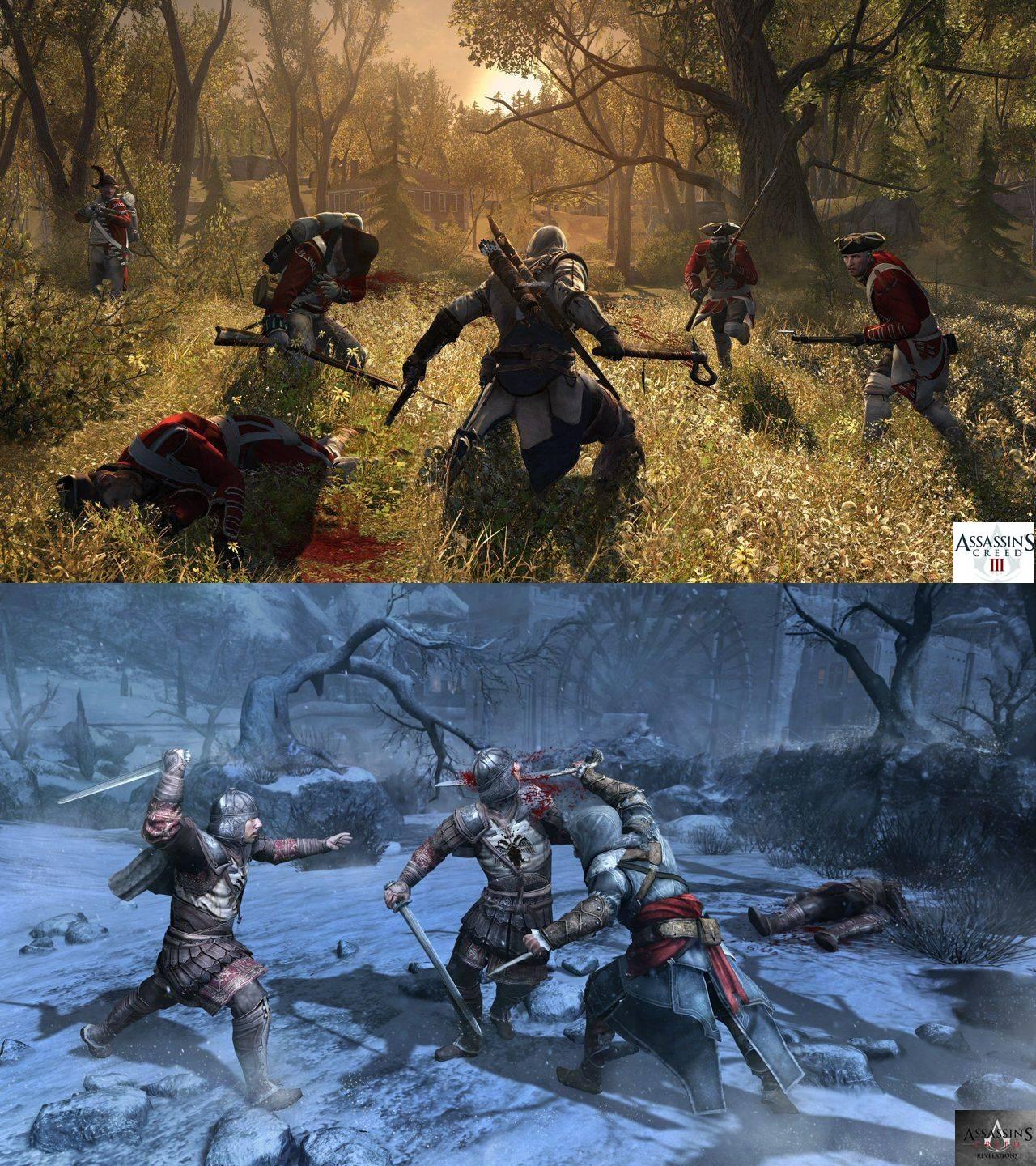 We all know Assassin’s Creed 3 uses the AnvilNext engine, an engine built from the ground up especially for Assassin’s Creed III itself so that the game could look much better than its predecessors. Of course, seeing gameplay in motion is one thing, but from what we see here, the improvements aren’t exactly very noticeable.

As soon as you look at the two images, you can see that both the games, Revelations and AC3, look great. However, what’s surprising is that Assassin’s Creed: Revelations seems to have larger focus on the environments and how detailed they look, while the character models and the weapons in AC3 have been crafted very meticulously. It’s also noteworthy how excellent the grass looks in the top image.

Let’s have a look at another image for combat: 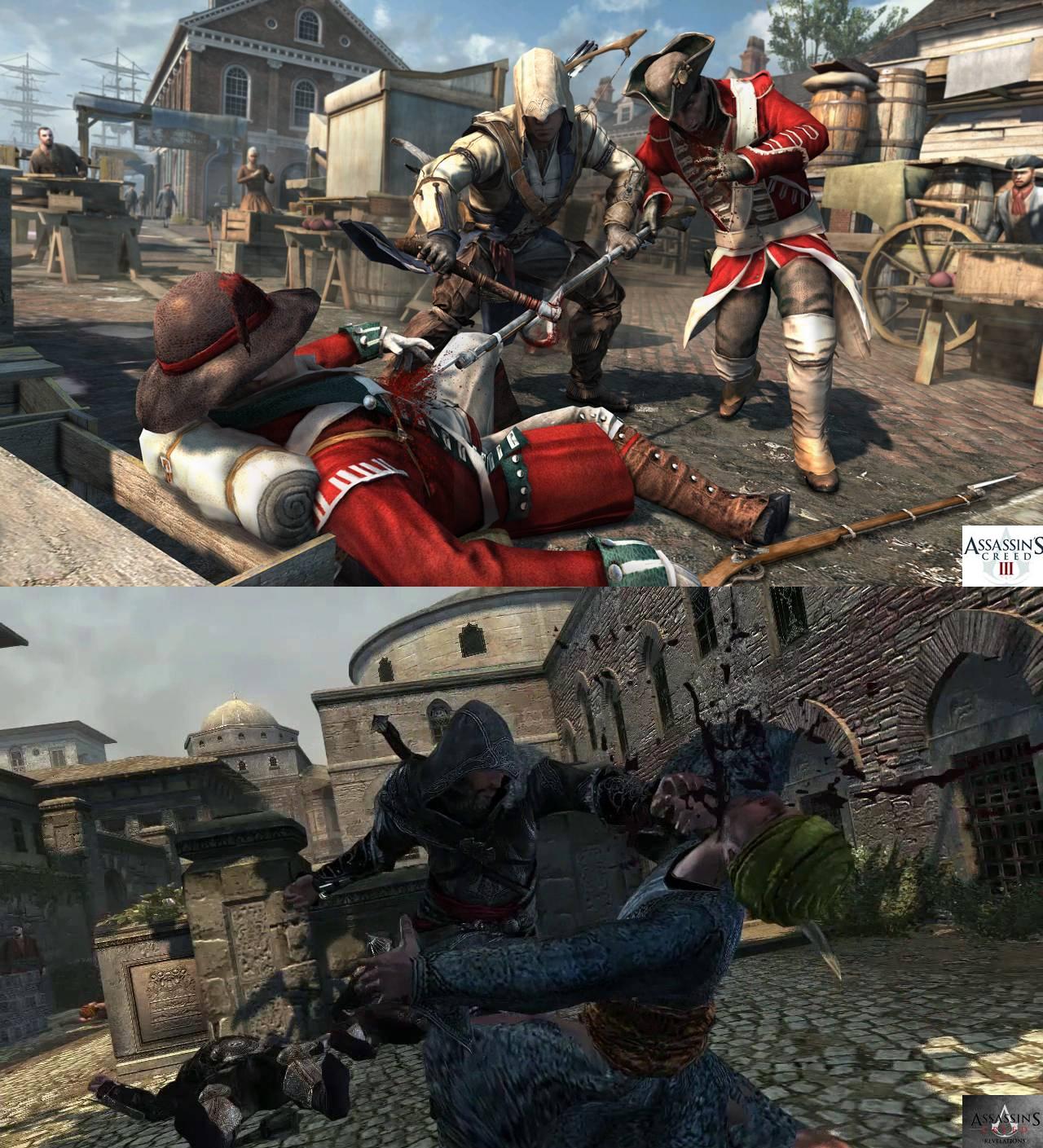 Now, in this image, Assassin’s Creed 3 clearly looks better. The city in the background is better detailed and less pixelated, the character models are- once again- very well crafted and it just looks all around more polished than Revelations.

In the visuals department, it seems as if both the games are almost neck and neck, but Assassin’s Creed 3 nicks it by a very small margin.

As far as playing it goes, Ubisoft has already confirmed that the combat system will be overhauled in AC3. The control scheme is supposed to be entirely different, you can use different kinds of weapons while countering and the basic aim is to keep your chain going without being hit. The combat looks brutal and enjoyable in AC3, but it looks like Ubisoft may not have been able to do anything about the stupid AI that has bee rampant in AC games during combat ever since 2007. 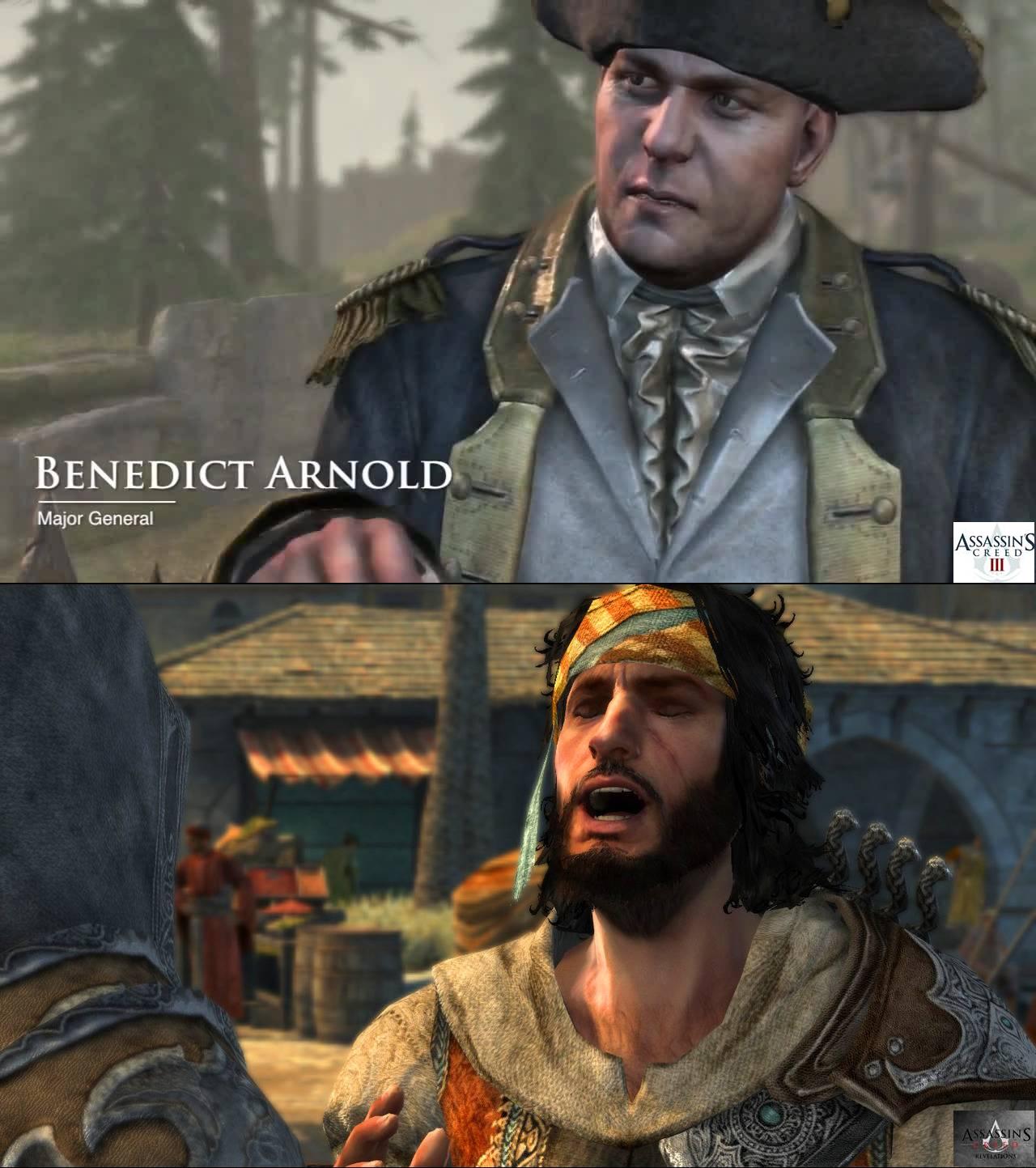 Assassin’s Creed: Revelations had plenty of great NPCs. It might have been missing the memorable Da Vinci, Machiavelli and Bartolomeo from Brotherhood and AC2, but it did have the likes of Yusuf, Suleiman and Sofie. In the NPCs department, AC3 seems to be going all out- George Washington, Ben Franklin and the infamous traitor, Benedict Arnold are just a few of the names that will feature in AC3. But how do they look?

With Revelations, the engine the AC franchise had been running on started showing its age, and the character models, while great, had a few rough edges… literally. In the image above, The character model of the NPC has been created very well, and it’s certainly an improvement. Yusuf’s character model has some rough pixels, and his features are not as clearly defined as the former’s. 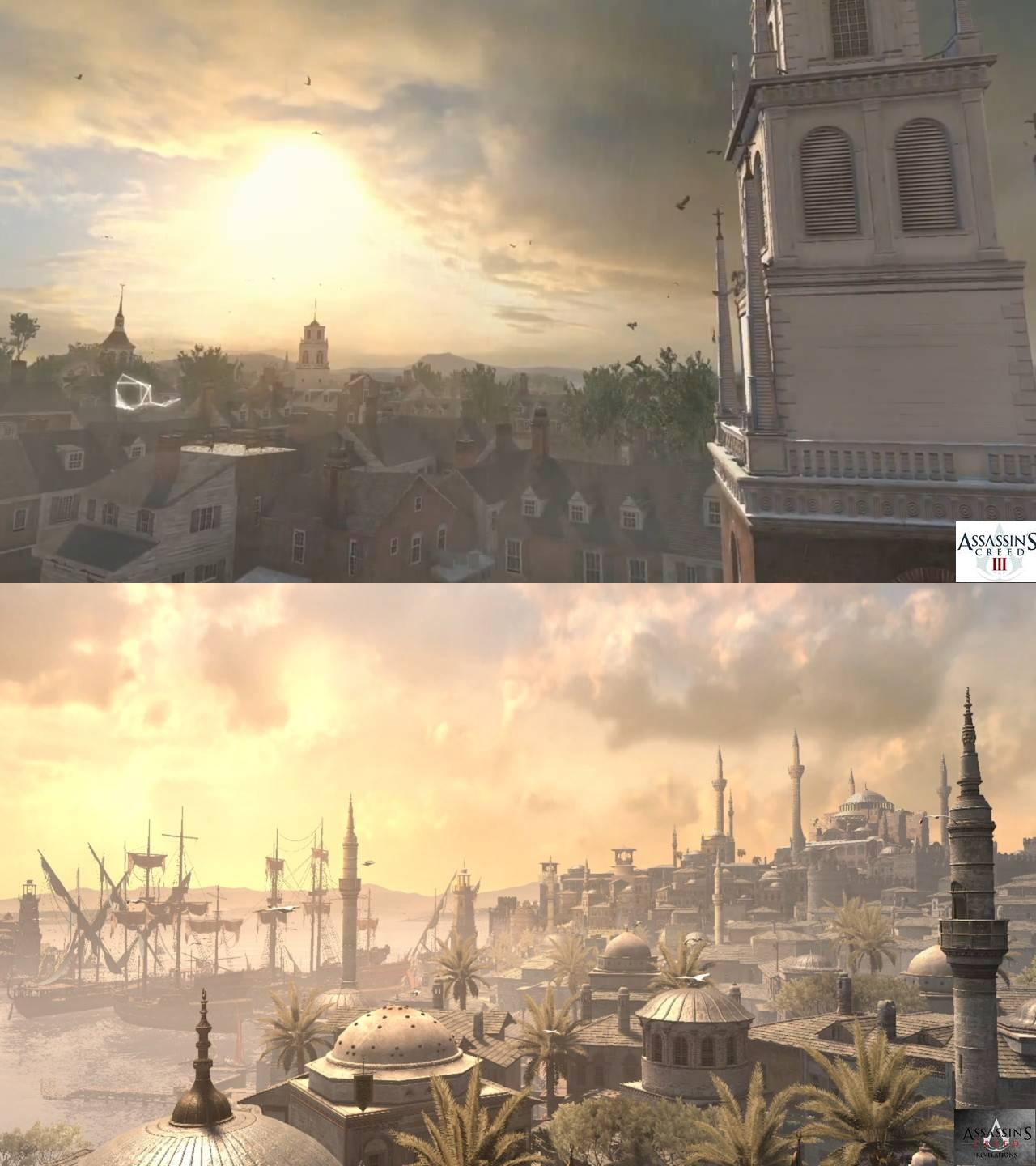 The Assassin’s Creed franchise is hugely famous for its great settings, realistic ally and authentically recreated cities and the fun you have while exploring those aforementioned cities. Now, Constantinople is the largest city the series has ever visited, so we won’t be comparing the sizes of New York and Boston to Constantinople here (enter generic penis joke). rather what they look like.

Assassin’s Creed 3 seems to be focusing more on the forest area- the Frontier- but the cities look excellent too. They’re as perfectly created as you would expect in a game of this franchise. Not only do you see everything you used to in previous games, now you also see carts rolling down mud-streets, children running about, houses with their windows open, dogs and pigs roaming about the city. It’s a fantastic recreation, and it looks excellent as well. 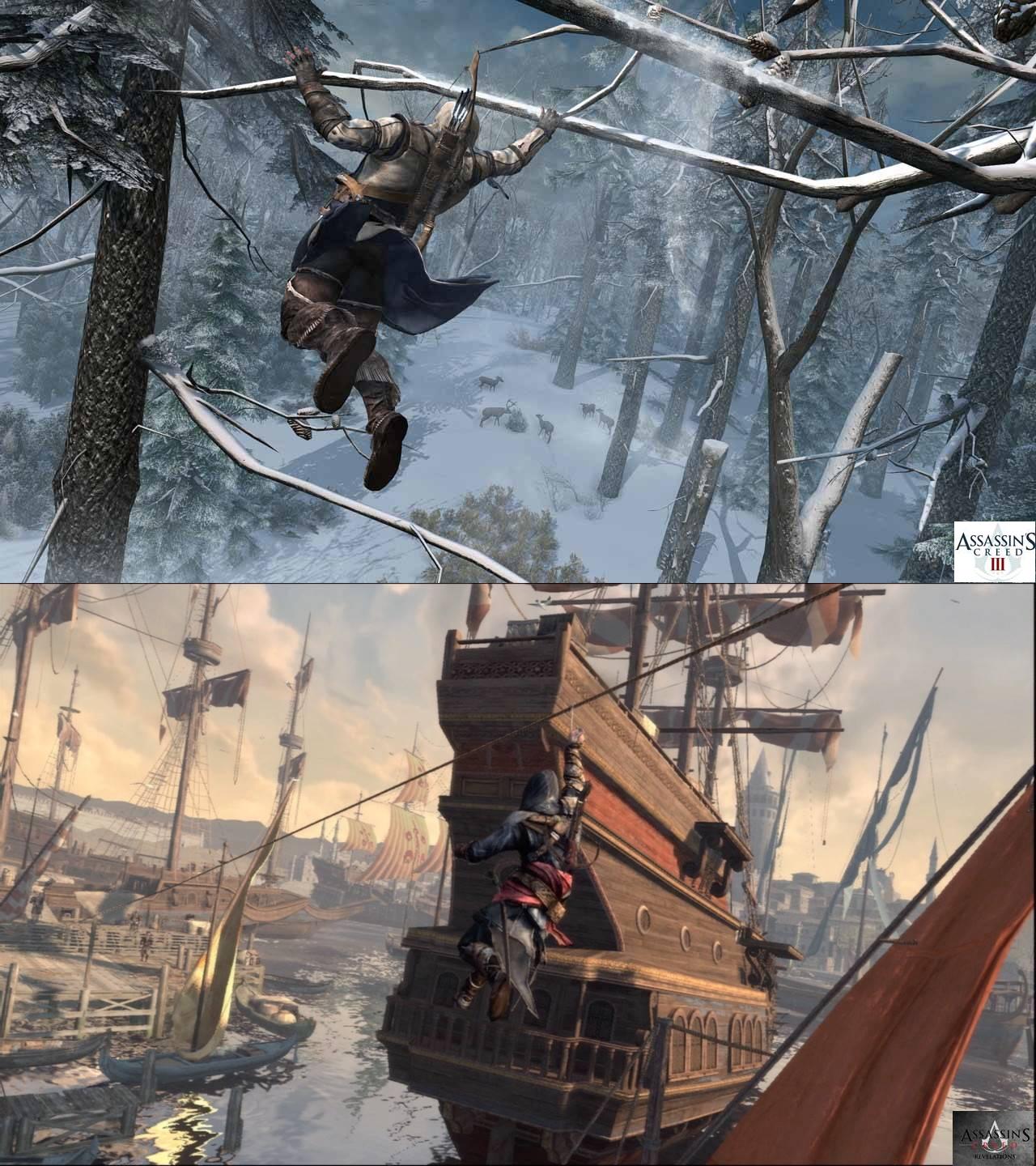 Now this is a close one. The attention to detail in both the games is amazing- the city in Revelations look great, the draw distances are commendable and the tiny little details make it all look excellent. On the other hand, the forest in AC3 looks excellent oo- the snow looks great, the trees seem to be looking organic and natural and the animals in the background make it all look authentic.

As far as artistic style goes, it would definitely be a tie here, as both look excellent, but AC3 has the edge in technical terms. The pixels are smoother in AC3, as mentioned before, and again, the character models and the all round visuals seem more polished, with the new engine. The difference isn’t striking at the very first view, but it sure it noticeable.

While the AnvilNext engine is not the radical, drastic change we hoped for, it does bring the Assassin’s Creed franchise to a new visual high. Assassin’s Creed 3 is not the best looking game, but it looks great. In comparison with Revelations, it’s often tough to say which looks better, bothbeing such artistic games in their visual style, but AC3 has the better technical visuals upon scrutiny.

What do you guys think? Which looks better? Tell us in your comments.

Also keep checking back to GamingBolt, our very own review of AC3 will be up in a few hours.