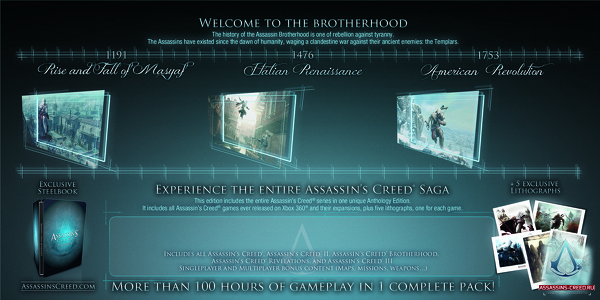 Ubisoft has confirmed that the Assassin’s Creed Anthology, which was leaked by Amazon France just hours ago, is a real thing.

That would include the two added sequences to Assassin’s Creed 2, the Leonardo Da Vinci’s Brotherhood DLC, the added content to Revelations and Assassin’s Creed 3’s Season Pass (presumably).

I’m not sure if the Benedict Arnold DLC for AC3 will also be included, since it is currently exclusive to the PS3, but it probably should be.

Ubisoft hasn’t confirmed a release date, the contents or even the release platforms as yet, though. So stay tuned and we will keep you updated.