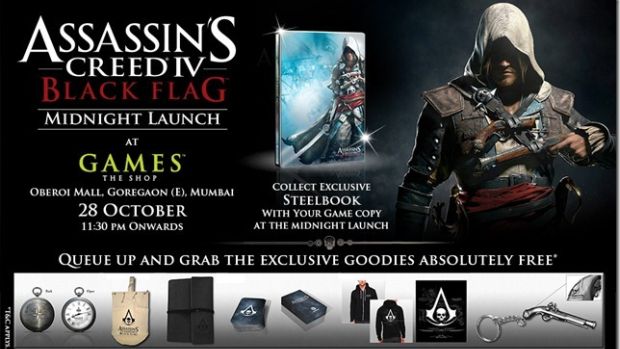 E-xpress Interactive Software has announced that there will be a midnight launch for Ubisoft Montral’s upcoming Assassin’s Creed IV: Black Flag at Games The Shop. It will take place on October 28th from 11 PM onwards, with fans able to purchase the game at the retail store in Oberoi Mall in Mumbai.

For those who attend the midnight launch, there will be a chance to net exclusive bonuses such as diaries, key chains, posters, stickers and more. One lucky winner will even stand a chance to pick up an exclusive poster for the game signed by members of the development team at Ubisoft. If that weren’t enough, all consumers attending the midnight launch wil receive the game in the official steel book casing.

Assassins Creed IV: Black Flag will launch in India on October 29th for Xbox 360 and PlayStation 3, with both versions retailing for Rs. 2999. PC gamers will need to wait a bit longer as the game is expected to release on November 22nd for the platform.

Gotham City is a wretched hive of scum and villainy in the action RPG. Here's how to clean up its notorious ba...

NHL 23 Guide – How to Perform Dekes, and Qualify for HUT Champions

Dekes can take some time to master but are essential. Here are all the different kinds and tips on qualifying ...