Four different in-game items at each retailer and additional missions? Don’t mind if we do. 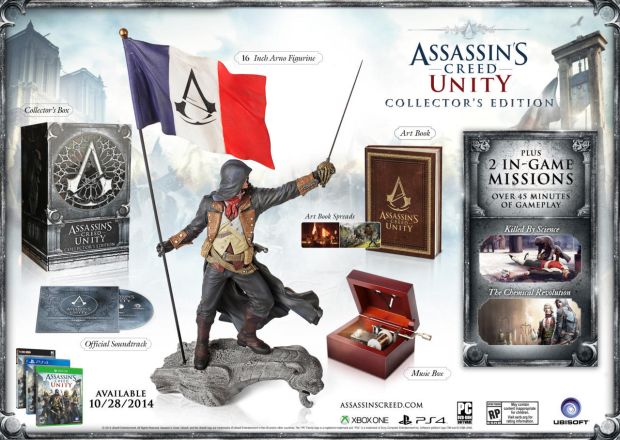 Ubisoft has announced its range of pre-order bonuses for Assassin’s Creed Unity, with each unique retail receiving its own unique in-game item.

Amazon consumers will net the Pioneer Axe, which is “a battleaxe like no other”; GameStop customers will get the Razorhead Spear, which apparently promises to kill every piece of armour out there; Walmart gets Maple Hunting Rifle; and Best Buy gets the Under/Over Pistol, an double barreled pistol that can apparently let off two bullets at once. All pre-orders will also feature “The Chemical Revolution” mission along with a code for participating in a real world sweepstakes (with one of the prizes being a trip to Ubisoft Montreal or Paris).

There’s also the Collector’s Edition, which will include a 16 inch Arnaud figurine, a musical box that can play the official, the OST, an art book, the Killed by Science and Chemical Revolution missions and of course, a swanky collector’s edition box.

What are your thoughts on all the bonuses and collector’s edition? Let us know below.