Assault Android Cactus. While the title would suggest downloadable content for EA Games’ Plants Vs Zombies, it’s best to take the word “Android” as literal meaning and throw in some twin-stick shooter action just for good measure. After crash-landing upon the Genki Star, an android policeman by the name Cactus, rescues her fellow androids then departs on an explosive rampage against the vengeful, robot menaces that’s now over-run the helpless star ship. Although the story itself brings back memories of something more in-line with Ratchet and Clank, the games themselves couldn’t be anymore different.

It’s within the game’s formula of being a twin-stick shooter where it sets itself apart from latter, as well as other games of such a commonly used narrative. While the intentions here are mediocre at best, the story is passable since the player’s attention should be entirely focused on its gameplay. Where the game chooses to utilize cut-scenes for specific moments within the game, they are kept to a brief minimum, hoping to place the player back into the action as soon as possible. Given the game’s lack of concentration to its characters and story, this is something I can appreciate. 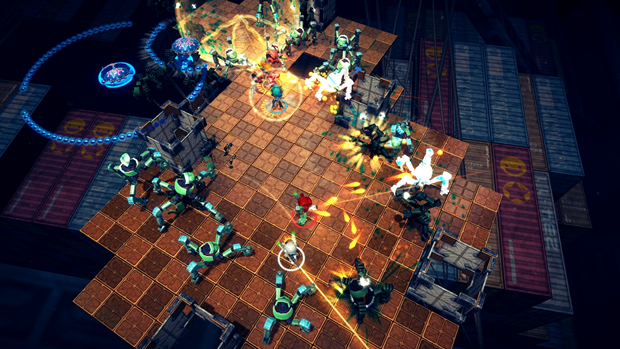 " While the intentions here are mediocre at best, the story is passable since the player’s attention should be entirely focused on its gameplay."

Right from the beginning of the game there’s a selection of four characters to choose from, and as the player makes their way throughout the game additional characters will be available, each providing new ways of play thanks to their class-based skills. Where Cactus for example comes armed with an assault rifle and a flamethrower, others such as Lemon, Coral, and Holly come equipped with lasers, shotguns, missile launchers and so on. One thing in particular that I found to be enjoyable within these selection of weapons lies within its supercharge mechanic.

Also known as Mega Weapons, it’s function is an obvious one: Destroy your foe, your weapons gets buffed, unleash chaos. Simple yet effective. Had the game not made use of this, I feel it’s safe to say that things would have become rather stale. It has to be said that although my connection to these characters felt limited at best, they should carry enough personality to keep players amused and engaged throughout their experience with the game. Something along the lines of a children’s television show produced by the likes of Cartoon Network is where these characters hold reminiscence.

With that being said, it carries a slight familiar charm to that of Platinum Games’ The Wonderful 101, along with similar gameplay mechanics of Sierra Entertainment’s Geometry Wars 3. Where the former gets away with enough diverse gameplay and exciting action sequences, and the latter to that of a competitive nature with a killer aesthetic design, this game doesn’t quite manage to reach such varied levels of entertainment. Gameplay takes an approach that’s geared towards those who enjoy competition and difficulty. Providing the player with what is essentially two distinct health bars, the first corresponds to the character’s battery pack, which in turn represents the character’s life. 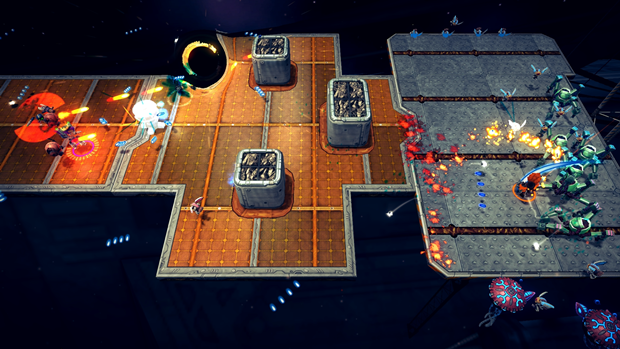 "With that being said, it carries a slight familiar charm to that of Platinum Games’ The Wonderful 101, along with similar gameplay mechanics of Sierra Entertainment’s Geometry Wars 3."

As this battery pack continuously depletes over the duration of gameplay time, the player must remain on top of their game and replenish its sources by defeating enemies. The second being provided to the player is one that I consider to be rather pointless to say the least. Representing the character’s health status, this is where enemies inflict their damage. Should the player be deprived of their health, they can simply mash away at the buttons and respawn to full regeneration, so long as their battery pack contains enough charge. As the game’s progression system works via a series of hubs, each with their own set of levels to take part in, each of these levels contain stages which play-out as a series of horde modes.

Clearing out each of these levels grants access to each of the game’s many boss battles, who then grant further access to the next hub world. As mentioned previously, the game plays out as a top-down twin-stick shooter, and while it’s satisfying to play with a mouse and keyboard, the nature of the game recommends you play with a controller from the comfort of your sofa. It’s not by any means mandatory, but as indicated by the local-cooperative choice of one to four players, the developer’s intentions seem rather clear. 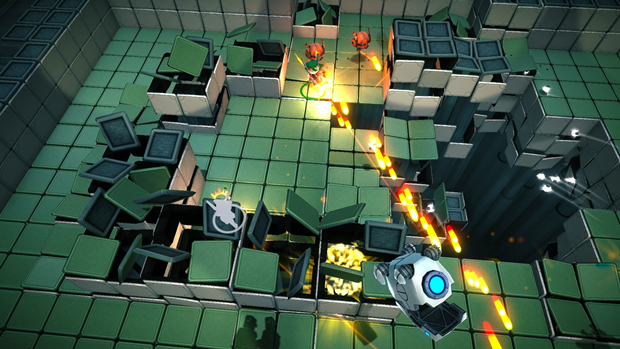 "Should the player be deprived of their health, they can simply mash away at the buttons and respawn to full regeneration, so long as their battery pack contains enough charge."

Although the game’s combat mechanics are solid and provide a fair amount of diversity given the core mechanics of the game being a twin-stick shooter, one thing in particular I wasn’t to keen on was the game’s visual restriction in level design. While the game is by no means bland, it would do well in mixing up its level design in the way how things are played. It’s worth keeping in mind that the core mechanic of gameplay functions as a horde-based, twin-stick shooter, but the inclusion of an on-rails, bullet-hell sequence would’ve been a welcomed addition.

Similarity is too much of a common theme, as the similarities that exist within each level becomes one that’s expected upon entering the upcoming stage. Given the environment of the game is bound to that of a spaceship it would have been nice to see alternative stages, as opposed to just elevators, boarding platforms, and hallways. The game’s aesthetic design is best described as cartoonish science-fiction dipped in a shiny metallic rainbow.

Where the game manages to make use of these limiting environments is done so in a technique that’s actually quite clever. As the player battles against hordes of enemy robots which thankfully are quite varied, the battle stage constantly rotates, shifts, and transforms adding a new sense of space without actually transitioning to a new area. This visual overhaul is appreciated as it attempts to disrupt and diversify the player’s traversal, therefore providing challenge which the player must adapt to. It’s here where the similarities to Geometry Wars 3 prove strong, something of an explosive dance floor that thankfully puts a restriction on the use of dubstep. 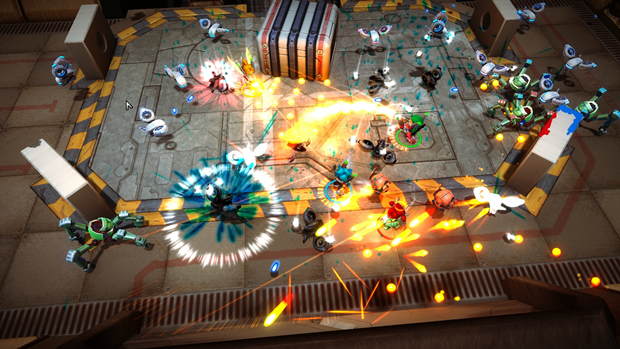 "The game’s aesthetic design is best described as cartoonish science-fiction dipped in a shiny metallic rainbow."

Think Geometry Wars with bobble heads. With that being said, the game’s soundtrack is pleasing to listen to. Audio design is of an arcade nature, keeping in line with the tone of the game, which can also be listened to from the game’s main menu. Outside of the game’s campaign mode which in itself does provide enough satisfactory replay value, there’s also a community-based skill mode by the name of Daily Drive, and a challenge-based horde mode known as Infinity Drive, both of which are designed to push players to their limits, applying the pressure and stretching their endurance.

Should the game receive downloadable content within the near future, more of the same would be very much appreciated. Assault Android Cactus is a fun and challenging game, striking the right balance between difficulty and enjoyment. Solid in its gameplay and pleasing on the eyes, it’s great to play solo but it’s clearly at its best when played with additional players. This is where the game hits its high-points and will undoubtedly hold relevance in the time which follows its release.

Challenging, thoughtful, and worth playing with friends locally.

Variation in level design is somewhat unbalanced. An additional style of play to mix things up is missing.

Final Verdict:
GOOD
Playing locally with friends is where this game holds most of its potential. Playing solo is fine but much of the appeal that resides within the game demands the companionship of someone beside you.
A copy of this game was provided by Developer/Publisher/Distributor/PR Agency for review purposes. Click here to know more about our Reviews Policy.