A bit too soon off the line.

It’s all about the perfect lap. Finding just the right way to take the corners, learning the tracks so you know when to start breaking and when to stop, getting used to your car and the way it moves. But stringing together one perfect lap isn’t enough. Real endurance racing means stringing together a series of perfect runs, all within a fraction of a second of one another. Being just one or two seconds off is too slow. Consistency is everything.

Assetto Corsa Competizione understands that. The latest racer from Kunos Simulazioni, Competizione is a racing-focused spin-off of Assetto Corsa, the Gran Turismo Sport to its Gran Turismo, if you will. It’s also an officially licensed take on the Blacpain GT series, representing the 2018 and 2019 Sprint and Endurance Cups and the Total 24 Hours of Spa. It’s a game with a lot to live up to: a well-regarded series, a talented, proven studio, and the expectations that come with being a game that carries a license that is often underrepresented in racing games. 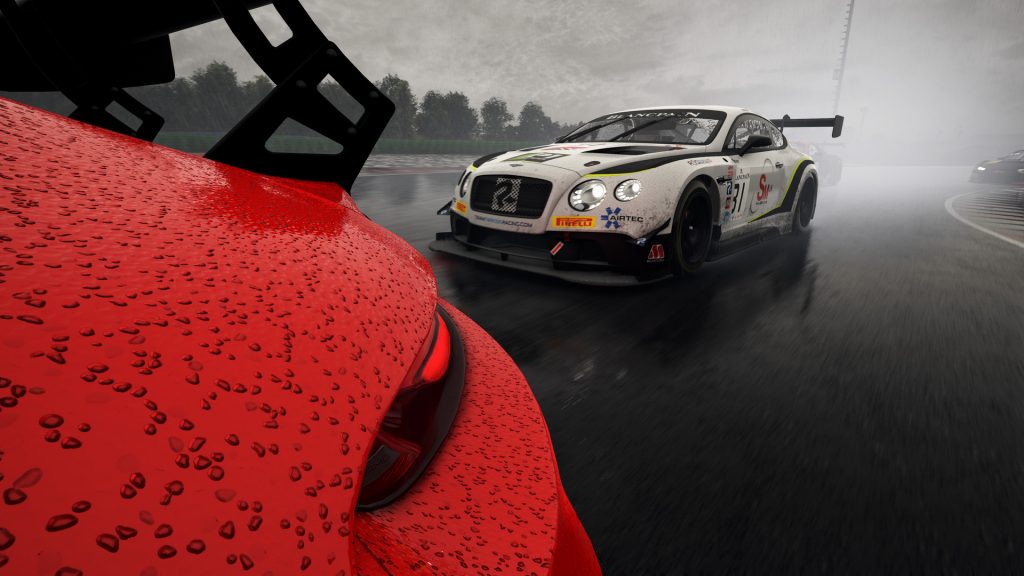 "The cars are utterly beautiful, and each one of them is rendered in superb detail, inside and out. Each one also feels completely unique from its counterparts."

It comes so, so close to getting it all right. The cars themselves are a highlight, helped by the motorsport series it represents. There aren’t a lot of places you can see Aston-Martin, Porsche, Ferrari, Jaguar, Lamborghini, and Bentley race one another, but Competizione makes the most of it. The cars are utterly beautiful, and each one of them is rendered in superb detail, inside and out. Each one also feels completely unique from its counterparts. As of this writing, the game contains twenty-one cars. It’s not an automotive museum, but that doesn’t matter when each one feels so distinct. Competizione captures not only their visual differences, but the way they sound and handle.

Take the Bentley Continental: it glides across the track, its engine sputtering like a motorboat. The Aston-Martin Vantage tends to understeer, but you won’t care once you hear the pop and crack of its glorious V12. The Jaguar is all elegance, and the purr of its engine will make you believe in a higher power. And then there’s the Porsche 911, a racing machine’s racing machine, with a fierce flat 6 and all the finesse you’d want. You might have to fight it a bit here and there on turns, but the fight is a rewarding one, and you always know what it wants to do.

This remarkable feel carries everywhere on the rack, from the feel and sound of the car bumping over a curb, to the magnified roar you hear coming out of the enclosed concrete of the pit, to the simple acceleration and shifting gears of each and every car, and the sound and feel as you race across a rainy track. Everything here is lovingly and perfectly detailed. The game simply feels and sounds right, and every jolt that rumbles through your controller or racing wheel and every sound that warbles through your headset feels like you would expect it to. The game looks gorgeous as well, whether you’re racing as a clear sunset crests over the top of the track or through a rainy night, trying to see what’s in front of you, figuring out where to turn. Add in the fact that each track has several weather settings and times of day to choose from, and that you can choose how dynamic the weather is, and you have a lot of racing to look forward to in every condition you could want. Unfortunately, all the weather effects in the world can’t hide the fact that the game only has eight tracks. 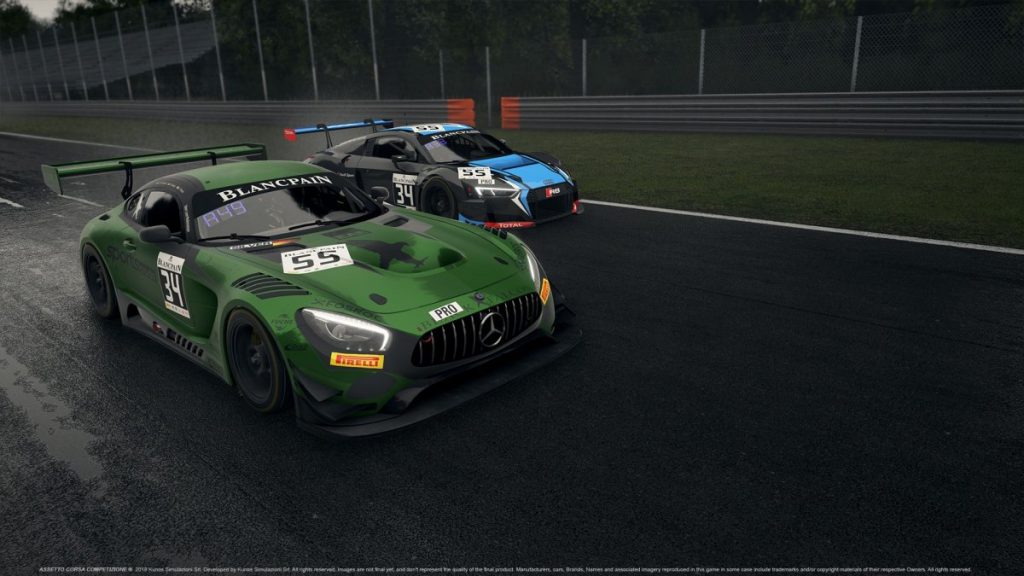 "The options for standalone races allow you to customize everything from track, weather, number of opponents, how aggressive they are, their skill level, and almost everything else you could want."

But for all the good under Assetto Corsa Competizione’s hood, and there is a lot of good, there’s a lot that’s still flawed, too. The game doesn’t really have a tutorial. To an extent, I can understand. This isn’t Forza; it’s a serious sim for the hardest of the hardcore, and part of that means expecting your audience to have certain knowledge. But when you provide all these assists for new players – and full disclosure, dear reader, I took advantage of them all. This is a hard game – it would make sense that you’d also want to teach anyone who is interested and playing on that level how to play the game. Gran Turismo Sport will walk you through racing terminology and techniques and give you lessons on how to tackle individual tracks. Competizione doesn’t really have… anything besides assists. It’s a bit of a disappointment.

Then there’s the game’s career mode, which feels barebones. There’s not much of a reason to really do practice sessions, and what help it does try to provide to anyone is just “race on this track, and we’ll adjust your assists based on how well you do.” Other than that, you just move from event to event. It’s rather dull. The options for standalone races are better, allowing you to customize everything from track, weather, number of opponents, how aggressive they are, their skill level, and almost everything else you could want. Want qualifying laps? Put ‘em in. Not interested? Choose your starting position. Want to do a 24-hour race? You absolutely can. Maybe a shorter one, say 15 minutes? Go nuts. Want hotlaps, quick races, endurance runs? They’re all here. There are also special events to play, which hand you a specific car and a track with set conditions and ask you to put up the best results you can. They’re a nice change of pace, but there are unfortunately only a few of them. The only real issue here is that the game’s AI can be a bit vindictive and will absolutely try to ruin you by running you over if given the opportunity.

The game’s multiplayer is also a mixed experience. The sessions I played in ran well and filled up quickly, but some people disconnected – intentionally or not, I couldn’t say – and more than a few people ran me off the road. The game incorporates safety ratings, much like Gran Turismo Sport and iRacing, but it does a poor job of explaining how they work, and a worse job of implementing them. There’s no nuance to the system: both cars in any collision are penalized, no matter what. In some scenarios, where both drivers are at fault, this makes sense. But that is rarely the case. If I am taking a turn safely and someone crashes into me, running us both off the road and invalidating our laps, why should I be punished for it? Simultaneously, if I push someone into the wall on a straightaway to mess up their lap, why should their safety rating suffer? In theory, safety ratings are a good system that let drivers of equal skill and aggressiveness play with each other. Right now, it’s ham-fisted and punishes everyone involved in a collision, whether responsible or not. 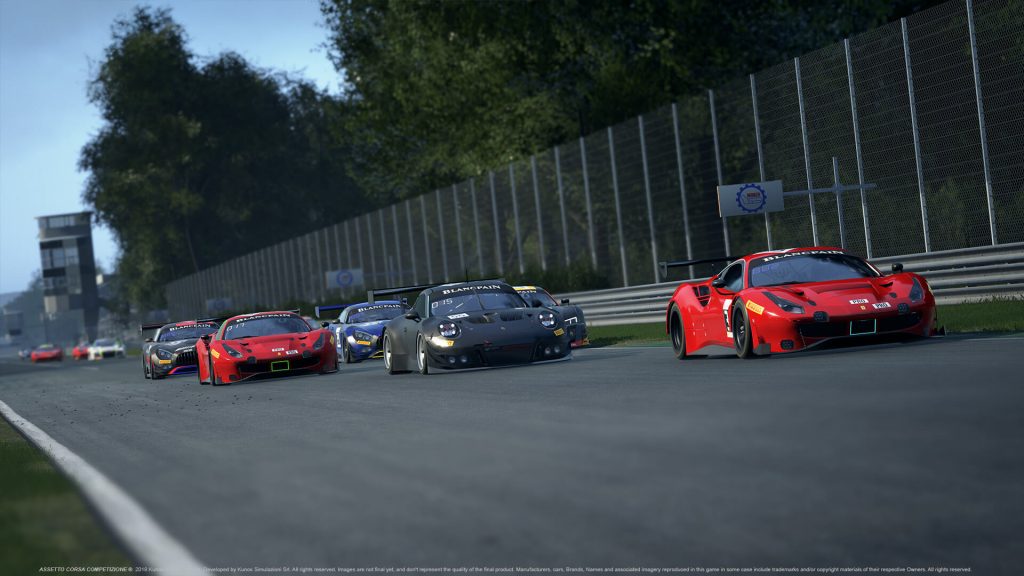 "Competizione has the moments: the perfect laps, the triumph, the failure. And if that is what you are after, you will find it here. But it is missing the consistency that makes a racer great."

And then there are the bugs, and there are several of them. Competizione just left Early Access, and it shows. The game ran well on high settings much of the time, but I experienced numerous visual bugs, including ghosting on cars at speed, and muddy and lost textures for things like decals when I changed camera angles. In addition, none of the game’s cutscenes had sound. The sound worked fine when I got into the game, but in cinematics it was like watching a TV on mute. I also experienced bugs with lap times in career mode. Once it informed me that my first lap around the track took 6 and a half minutes. I’ll admit that I’m not the greatest racer in the world but given that the race only started two minutes ago, it simply wasn’t possible, and I certainly wasn’t that bad. Other times, lap times would fail to record at all. These aren’t huge issues – I don’t need cutscenes, I could ignore the visuals bugs, and the lap time errors always eventually resolved themselves – but they’re still a problem and still affected my time with the game. Kunos Simulazioni has implemented multiple patches to bring the game up to speed in the last few days, but they’ve still got their work cut out for them.

The game has its moments. There’s beauty in watching everyone in the track form up, a line of cars flashing their brake lights around a tight turn, only to fan out again on the straightaway, continually jockeying for position. There’s beauty in the rain and the dark, in a track that gradually reveals itself. Elegance in the waving flags, in the tension marked by the bites and screams and whines of engines as they wait at the starting line. There’s the thrill of a personal best lap, and the satisfaction of a tight race, well won. There’s the joy of mastering a difficult turn, and the agony of a beautiful lap ruined by one taken just a bit too fast.

Competizione has the moments: the perfect laps, the triumph, the failure. And if that is what you are after, you will find it here. But it is missing the consistency that makes a racer great. It flashes the potential, and it’s clear that Kunos Simulazioni is making strides to close these gaps in performance. But consistency is everything in a race. An extra two seconds on one lap can be all the difference. And that’s where Assetto Corsa Competizione is now. It has the hot lap, but it can’t replicate it. It just needs to find a way to trim off that extra two seconds. If it can nail that consistency and bridge the gap that separates the solid from the superb, it will be something special.

Only 8 tracks. Career mode is barebones. No tutorial to speak of. Lots audio and visual bugs. Lap times can be bugged. Safety ratings are poorly explained and implemented. AI can be spotty.

Final Verdict:
FAIR
Assetto Sorsa Competizione features incredible driving, fantastic sound design, impressive weather effects, and gorgeous cars and tracks on which to drive them. Unfortunately, its limited career mode, poorly implemented safety rating, spotty AI, and lack of polish keep it from achieving greatness on the track.
A copy of this game was provided by Developer/Publisher/Distributor/PR Agency for review purposes. Click here to know more about our Reviews Policy.