The newest Atelier game is easy to recommend.

The Atelier series has always been like a sort of dark horse of the JRPG genre, so to speak- you’ll never hear people get passionate about it like they do for Final Fantasy, Kingdom Hearts, Xenoblade, Persona, or Fire Emblem, and it will never end up on any Game of the Year or Most Anticipated Games lists- but there has been a new one every year for the last 15 years, and the games have settled into a healthy rhythm of iteration and evolution with each new installment. If you’re a series fan, you always have one game you can look forward to each year, and you can always be assured of that game being pretty good, and sufficiently differentiated from the previous year’s title.

If you’re not a fan, though, then it can be hard to break into the series at this point- even among JRPGs, Atelier is niche, and the sheer volume of games to keep track of can be a bit overwhelming and intimidating. In a lot of ways, Atelier is a series with a frozen fanbase- those who’re in, are in. Those on the outside can’t do much about it, and often don’t want to, either.

With Atelier Sophie, developers Gust and publishers Tecmo Koei look to change that- this is a game that, while set in the same universe, represents a sort of soft reboot for the series, with a new story arc that doesn’t continue from the PS3 games, and some new gameplay mechanics to mix things up. At the same time, the games’ infamous approach to so called ‘fanservice,’ where young anime girls are depicted scantily clad, with innuendo laden dialog, for no ostensible reason, has also been toned down, making this a game far more palatable to those who would otherwise stay away from it for that reason. 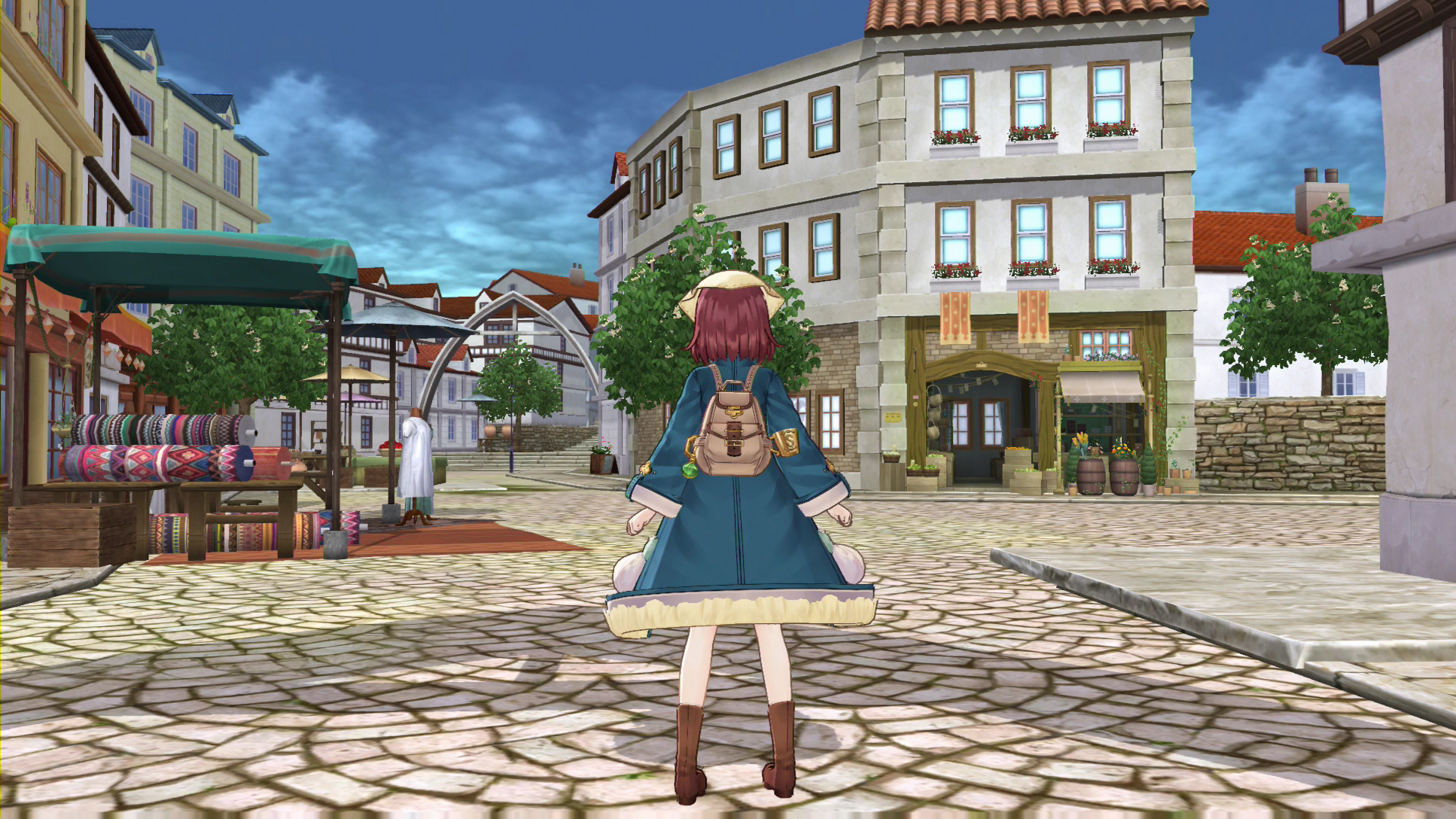 "Gust create a very compelling and convincing pastoral hamlet that Sophie lives in, filled with vivid and memorable characters, and the emphasis is on their stories, their problems, and Sophie’s attempt to help them with those problems."

It’s a very simple plot- there is no end of the world doom story here, and the focus is squarely on Sophie, and her relationships with the people around her. Gust create a very compelling and convincing pastoral hamlet that Sophie lives in, filled with vivid and memorable characters, and the emphasis is on their stories, their problems, and Sophie’s attempt to help them with those problems. It’s like the beginning of each fantasy story, where you find the chosen hero in a sleepy village, living an idyllic life with the rural community- except here, the sleepy village and the idyllic life is the story, and the hero never moves away from it for a larger destiny.

The result is a story with decidedly low stakes, but such a well realized setting, and such well done characters, that just wanting to inhabit the game’s world can be enough to keep you playing. The game’s charming art and appealing graphics further bring the world and its people to life- you can truly believe that this place exists, with all of its people, and their assorted problems. The well written translation, alongside some surprisingly good voice work, further sells the setting to you.

The way the game is structured, it would work perfectly fine as a sort of more fantasy take on something like Animal Crossing– but it does see you leave the village, as you must, to scout out items necessary for alchemical concoctions that you will need for solving the problems of your friends in the village. The game, essentially, becomes one glorified fetch quest- but since the fetch quest is never the central point, but only supplementary to the character interactions, it never begins to feel like a drag like fetch quests in other games often can.

While you are out searching for materials, you can and will have to engage in combat. Combat in Atelier Sophie is pretty standard JRPG fare- turn based battles, party formations, stances, and special supporting attacks and abilities. There’s nothing here that hasn’t been done before, and nothing that really stands out- conversely, the battles are fun, quick, and generally get out of the way pretty soon, and they never break the pace like turn based battles often can and do in other JRPGs. 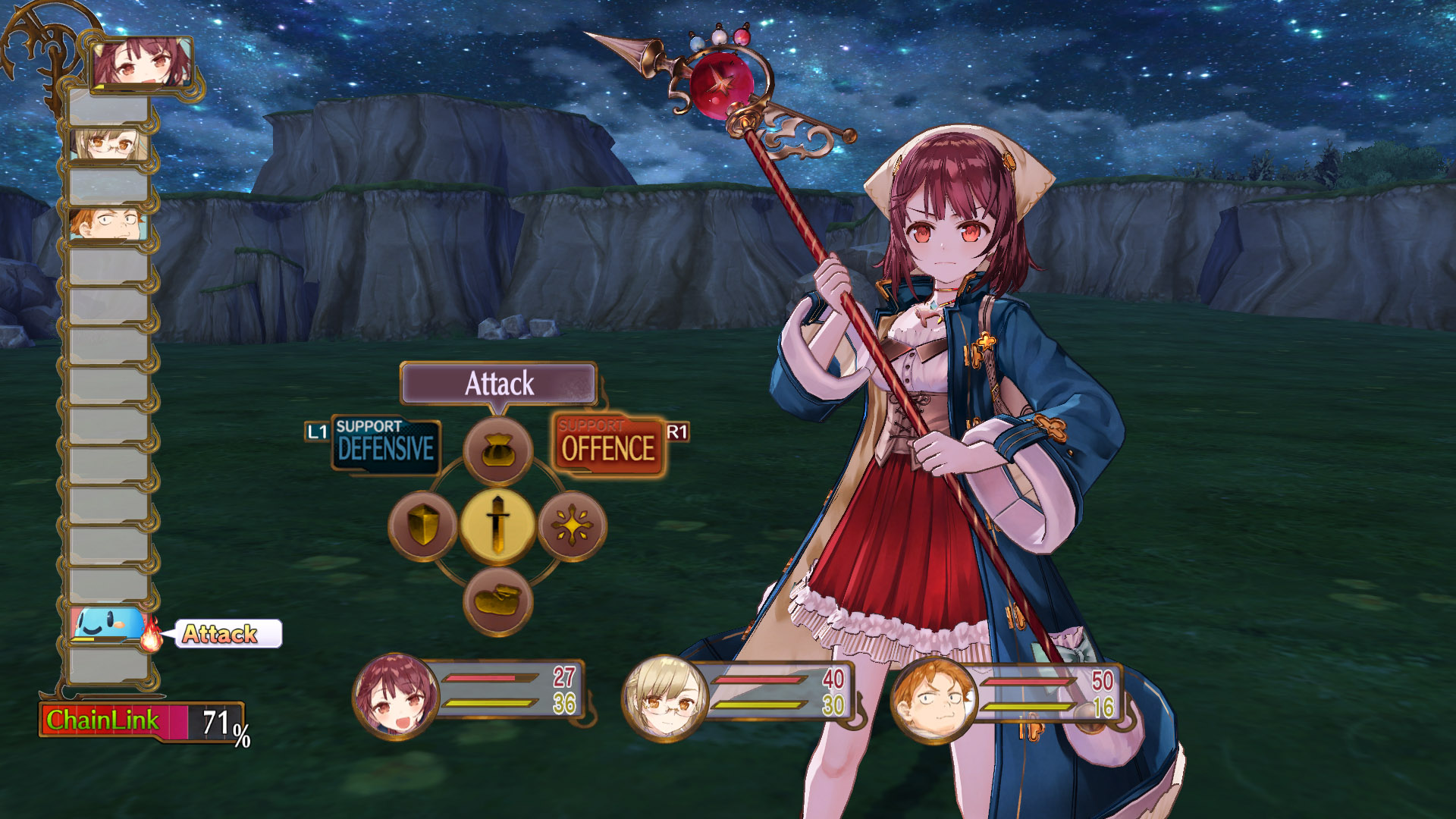 "The battles are fun, quick, and generally get out of the way pretty soon, and they never break the pace like turn based battles often can and do in other JRPGs."

Defeating enemies, and exploring the world, lets you find the components and elements that you need for your alchemy. Sophie is a bit of a hoarder, grabbing everything and anything that she comes across, which is just as well, because as mentioned before, she doesn’t have any recipes on hand, and has to figure things out with sheer trial and error. In gameplay terms, this means that simply finding new materials and talking to people can lead Sophie to coming up with new recipe ideas (and once she concocts something new successfully, it ends right back in the book for future reference).

This actually helps with the series’ penchant for ‘the grind’ too- since you are no longer bound to specific recipes, you can end up improvising, and you are encouraged to. A recipe with a liquid base doesn’t have to use water, it can use the loads of body fat oil and slime you’ve accumulated through your endless battles too, and a recipe for cloth needs fur, but you can decide what kind of fur you need, instead of having to hunt down a specific kind of rare creature for it.

All of these gameplay mechanics and systems, however, serve the central story- with the irony of the situation being that there isn’t much of a story to begin with. Atelier Sophie is perfectly content to let an overarching narrative slide into the background, and shine the spotlight on its characters, their dilemmas, and their interactions with one another. It is perfectly happy with building a gorgeous world, and then not threatening it with some kind of apocalyptic destruction. It is a game that you play for escapism into a world where you aren’t threatened with death or mystery, but one that you inhabit voluntarily to truly absorb it. More Animal Crossing than Final Fantasy, the end result is a game that represents the Atelier series’ best chance to finally break out of its niche, and find a larger audience. Fans of JRPGs, or simply PS4 owners looking for something relaxing to play, will probably find themselves content with the game- already a bigger audience than before for the series.

Charming, idyllic, pastoral lifestyle and atmosphere convincingly built up; well done voice acting, and a very pretty artstyle; the gameplay gets out of the way rather than dragging the pace down

Fans of JRPGs, or simply PS4 owners looking for something relaxing to play, will probably find themselves content with Atelier Sophie.

A copy of this game was provided by developer/publisher for review purposes. Click here to know more about our Reviews Policy.
Tagged With: atelier sophie: the alchemist of the mysterious book, Gust, Koei-Tecmo, ps4