Badland Game of the Year Edition Review – Fly Away From Here

Frogmind takes the leap from mobiles to consoles and comes up slightly short.

Finding a compelling game in the smartphone market is difficult. If you’d never heard of GameLoft and trusted big-name publishers like Square Enix which milked their customers willy-nilly with games like Final Fantasy: All The Bravest, you’d likely be missing out on the real quality releases floating around. And no, we don’t just mean the likes of Angry Birds and Cut the Rope. Take Frogmind’s Badland. It was a puzzle game which combined quick reflexes, intelligent decision making and linear levels for easy fun. Badland struck an intriguing little balance between “easy to learn” and “difficult to master”, piling on its puzzle mechanics in an almost old-school style of level scaling.

However, that was two years ago. Badland: Game of the Year Edition signals the game’s simultaneous release on home consoles and PC hardware. Given the influx of indie titles, particularly 2D side-scrollers with awesome production values, how well does Frogmind translate the mobile puzzler onto the big screen? Is the resulting gameplay value worth your time and money at the cost of portability and convenience? 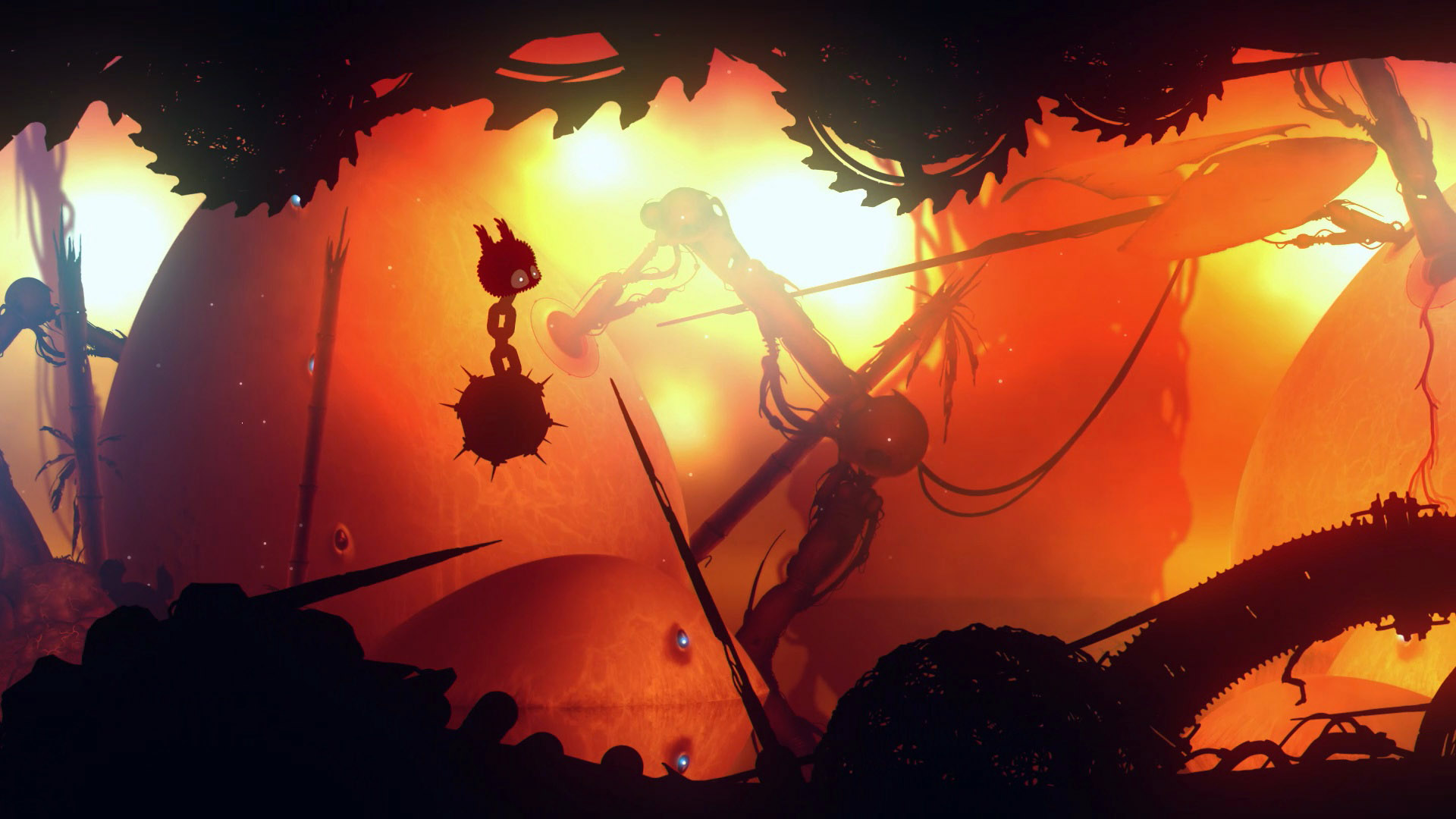 "You'll face scenarios wherein one Clony must traverse through the upper part of the screen while another Clony moves through the bottom. The world is full of dangerous traps including buzz saws, hydraulics, thorns, falling rocks and much more as mysterious machines hang about in the background."

Badland’s gameplay is somewhat like Flappy Bird, except with much more variety and with far less punishing mechanics (in the beginning, at least). You control a small little bird-like creature called Clony that progresses through a strange and mysterious world divided into days, each day denoted by a certain time of day such as Dawn and Noon.

These days consist of numerous small levels with their own little mechanics to conquer. By holding down the right trigger, players will dictate how high or low Clony can travel through these levels. One will also come across differing power-ups. There’s a power-up which results in numerous Clonies being generated and one that can increase Clony’s size exponentially.

You’ll face scenarios wherein one Clony must traverse through the upper part of the screen while another Clony moves through the bottom. The world is full of dangerous traps including buzz saws, hydraulics, thorns, falling rocks and much more as mysterious machines hang about in the background. Credit must be given to Frogmind for simply yet seamlessly blending together numerous mechanics like environmental destruction, switch pressing, protagonist-altering and quick timing together in rapid success for a number of levels.

Even on mobiles though, Badland’s graphical approach was as casual as could be. The art style is interesting and colourful, evoking a darker Rayman and World of Goo aesthetic while still managing to remain distinct. The foreground is mainly silhouetted in shadows, making it difficult to identity certain switches and puzzle solutions in the environment.

Frogmind has a done a decent job bringing Badland to the Xbox One but the higher resolution artwork tends to clash with the minimal amount of activity occurring in the environment. At times, the effect is beautiful and stark. At others, it can be extremely and utterly routine as you whizz by levels without paying too much attention to the visuals. And unlike the other aforementioned games I didn’t find too much soul in Badland’s world. Thankfully, there weren’t any frame rate troubles, tearing or other discernible glitches. 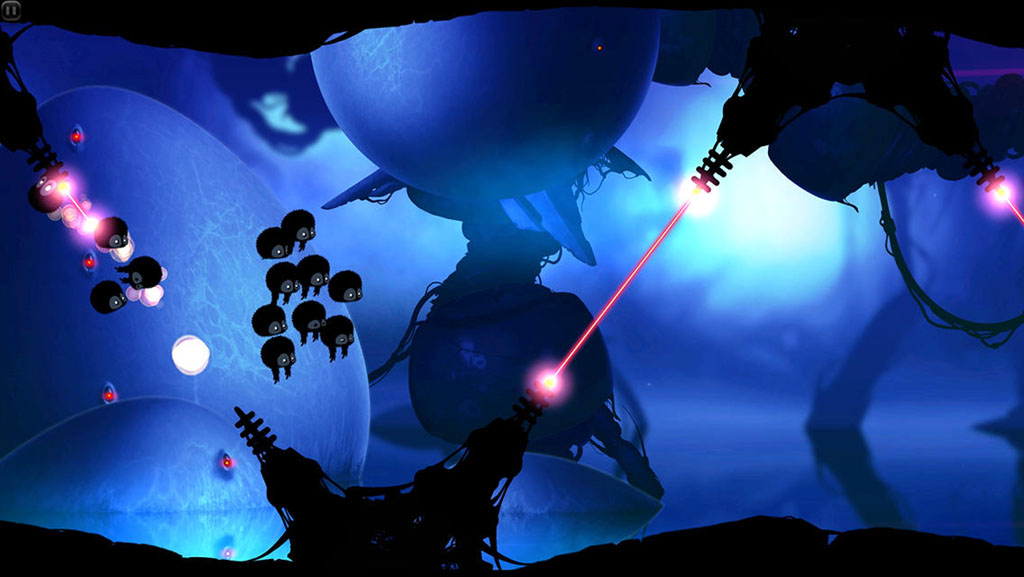 "This isn't to say that Badland: Game of the Year Edition isn't fun. When it all clicks and you start that smooth, perfect run through a level, it can be an exhilarating feeling. Even when you're slowly traversing some sections, waiting for that opportune moment of timing to progress, there's a fair amount of tension."

There was concern about the puzzles and how they’d carry over into the console version. While Badland is no Ninja Gaiden, its gameplay felt more like an old platformer rather than a new-age, hand-holding mobile title. Often times, you’ll find yourself making significant progress in a level only to make one small mistake and be back at the beginning. At other random times, there will be checkpoints for you to continue your progress.

And considering the nature of the gameplay, it did take a fair number of retries in order to clear some stages. There’s nothing too severe that can’t be cleared with sufficient effort though. The one nagging criticism I had of the game’s puzzles was in the pacing. Badland doesn’t give you much time to gloat or marvel at your ingenuity before hurling you to the next stage. The plot is minimal and even non-existent at points, leaving you to clear stages for the sake of overcoming challenges more than anything else.

This isn’t to say that Badland: Game of the Year Edition isn’t fun. When it all clicks and you start that smooth, perfect run through a level, it can be an exhilarating feeling. Even when you’re slowly traversing some sections, waiting for that opportune moment of timing to progress, there’s a fair amount of tension. It’s just that it feels less like a home console game and more like an interstitial selection of levels. While this isn’t necessarily a bad thing on mobiles – you can pick up and play at any time without having to remember the plot or your current progress – it does feel somewhat lacking on consoles, especially with extensive play.

Badland: Game of the Year Edition does have its issues and it indeed feels out of place on the Xbox One. It’s still a decent time pass, one that you play at off-times but it stands rather oddly next to the numerous AAA releases on the console. Even compared to most modern indie titles, there isn’t a whole lot of replay value to Badland. Once you finish the main campaign, you’ll only really be motivated to unlock the relatively simple Achievements before retiring the game for good. Badland isn’t a game everyone should play immediately but if you find it cheap, it’s an interesting and at times fun game that’s pretty forgettable.

Linear and bite-sized levels feel better suited to mobiles than consoles. Pacing feels too quick at times, leaving little space for reflection or glory. Simplistic plot that fades into the background (literally). Could have been more visually dynamic.

Badland: Game of the Year Edition seems undercut by its basic nature more than the troubles that ports face. Though fun and challenging at times, it struggles to match up to the best its genre has to offer.

A copy of this game was provided by developer/publisher for review purposes. Click here to know more about our Reviews Policy.
Tagged With: Badland: Game of the Year Edition, Frogmind, ps4, Xbox One