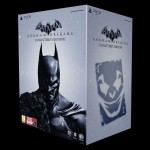 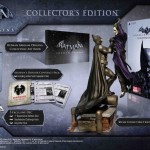 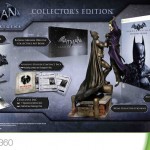 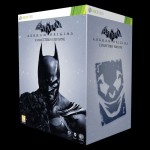 As of now, the UK version of the Batman: Arkham Origins Collector’s Edition will include a premium status of Batman and The Joker, an 80 page hardcover artbook, an “Assassin’s Intel Dossier” which features info on all the assassins after Batman in the game and a copy of Black Mask’s contract, the first appearance Batman Skin DLC (which is essentially Batman’s first costume), a Challenge Pack which lets you play as Deathstroke in all the Challenge maps (along with including two bonus maps and skins) and an exclusive metal 3D pack.

As announced at E3, the PS3 version of Arkham Origins will be seeing the Knightfall pack as an exclusive. It will be also be included in the Collector’s Edition for the PS3. And admittedly, the PlayStation 3 box looks a lot more cooler in design. Expect more details on the North American version by next week.