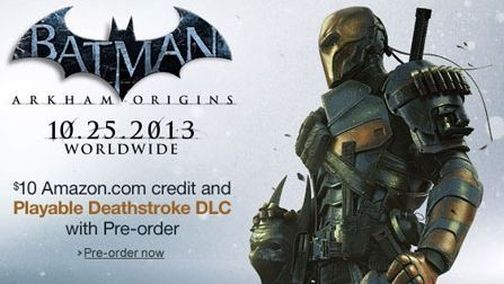 Batman: Arkham Origins, developed by Warner Bros. Montreal, is a prequel to the Arkham Asylum/City games and features a relatively younger Dark Knight taking on the Black Mask and a range of assassins. One of those is master killer Deathstroke, who we’ve already seen tussle with the Bat in multiple screenshots and in the new teaser revealed recently.

However, a pre-order banner on Amazon, which has since been removed but can be seen above, indicates that Deathstroke DLC is in the offering, along with $10 of credit. This DLC could be many things, like extra missions or a side story.

It could also be similar to the DLC from Arkham City which allowed gamers to play as additional characters like Nightwing, Robin and even Batman Beyond. Only here, you’ll be in control of Deathstroke.

Take this is hearsay for now, since Warner Bros. Montreal hasn’t made an official announcement. Batman: Arkham Origins is slated to release on October 25th for Xbox 360, PC, PS3 and Wii U.