Through colourful curtains, rotating ducks, and an artistic background of hand-drawn illustrative stages, Battle Princess of Arcadias waste no time in plunging the player directly into the heart of the game. This was both pleasing and enjoyable as opposed to sitting through a ten minute cut-scene, and an hour long tutorial fueled by over complex game mechanics that most JRPGs seem a custom to.

Known as Plume the declared protector of the kingdom of Schwert, The Princess’ loyal squire known as Del, is slayed by a forest dragon and it’s up to the player to finish what Del started. After a brief tutorial of basic and strong attack buttons, player navigation, and a simplified item system, the player is required to hack ‘n’ slash the beast to it’s demise and become familiar with the controls. 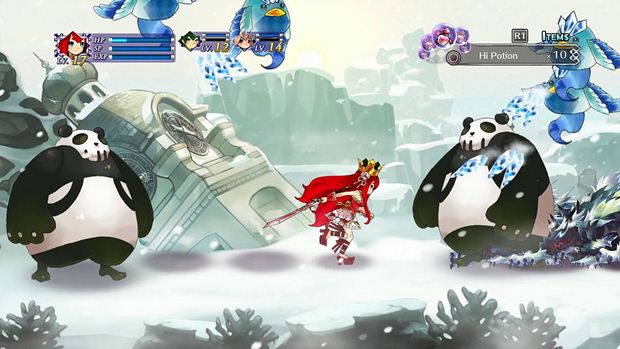 "This was both pleasing and enjoyable as opposed to sitting through a ten minute cut-scene, and an hour long tutorial fueled by over complex game mechanics that most JRPGs seem a custom to."

Heading into a short cut-scene which introduces Raltz, the princess’ squire replacement due to Del’s death this is where the game truly begins and we become more familiar with the Princess’ character and those who will accompany her throughout the game. Seeing how Raltz has never been a battle and his scared stiff to the idea of even picking up a sword, it begs the question of who is going to be protecting who.

However, despite the desperation and imminent threat the game tries to present to the player, of dangerous monsters and such roaming the lands, the characters fail to portray this. Characters are cheerful and colourful in personality and smile through every encounter.

The princess enjoys the idea of monster slaying and appears to live in a dream world of her own, largely oblivious to what’s actually taking place around her.  Aside from mythical monsters of dragons and giant birds, Battle of Arcadias presents a norm inwhich talking ducks serve at the princess’ royal hand, and keep the player up to date with all the mishappenings taking place within the kingdom.

Battle Princess of Arcadias plays as a 2D side-scrolling hack ‘N’ slash inwhich the levels are decided through the navigation of a hub-based map, within the princess’ kingdom. Playing as a battle party of three characters, with the choice of characters expanding as you progress through the game and meet these wonderful and distinct people. All characters level up through battle by the use of skills and abilities in order to remain distinct and useful for different battle situations.

Experience points, gold, items, and score counts are registered after completing stages, then ranked upon a standardized grade of A, B, and C. The player is then allowed to reap the items gained from fallen enemies and put to good use should they not wish to sell or trade them. Something that’s unique about the game’s combat system is the use of brigade formations. This feature allows the player to set on-the-fly formations for supporting NPCs that aid you in battle. 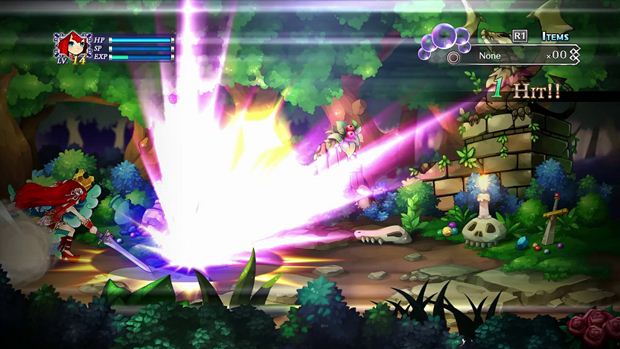 "Aside from mythical monsters of dragons and giant birds, Battle of Arcadias presents a norm inwhich talking ducks serve at the princess' royal hand, and keep the player up to date with all the mishappenings taking place within the kingdom. "

Attack formations, defense formations, and the choice to retreat, all place different effects on how the brigade moves in battle and raises certain abilities dependent on the chosen formation.

This adds a certain strategy to the game and is important when engaging in boss battles. As the use of NPC assistance builds up a power gauge, which is required for the use of special attacks known as showdowns. During showdowns the player needs to button bash as fast as possible within a given time limit.

A cinematic attack sequence then takes place in which a significant amount of damage is inflicted upon the enemy. This keeps the battle sections of the game from becoming boring and repetitive, while also looking visually stunning and exciting.

It’s important to work as a team while switching between your chosen team mates on the fly. Changing team mates is also crucial to the combat system as each character has his or her own unique weapon that may prove to be beneficial given a certain distance from your enemy. It’s also worth pointing out that since each character has their own health bar, upgrading each of them is quite necessary to the improvement of combat as well as your overall progression.

The failing of boss battles however seem to have no consequence for the player and you are free to repeat the battle or visit other locations in the game. There feels no rush or pressure to complete objectives in the game, and while this feels like a great implementation and serves as a good opportunity to stock up on potions and upgrade your weapons. The feeling of having no repercussions for failed battles seems like a missed-step for delivering new situations in the game, whether it be perma-death for NPCs or an adverse effect of the boss gaining it’s own set of skill points and holding it’s own sense of progression.

When the player is not taking place in battle, the kingdom’s village is free to roam about, where the player can visit the weapon-smith, item merchants, and barracks. While this hub is fairly limited in navigation and is simply a ten step system of moving the character back and fourth between each location, it seems to be attempting to replace a menu system in order to keep the player immersed within the game’s world.  At these stores the player can buy and sell different items, as well as upgrading, and equipping different weapons for each member of the battle party. 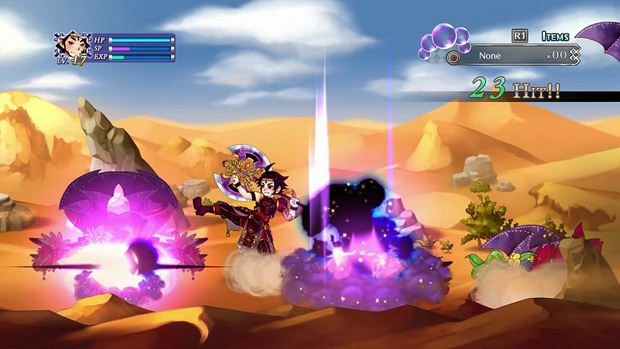 "The feeling of having no repercussions for failed battles seems like a missed-step for delivering new situations in the game, whether it be perma-death for NPCs or an adverse effect of the boss gaining it's own set of skill points and holding it's own sense of progression. "

As every location in the game is navigated through a 2D stage in which you move from one stage to the next, by walking left to right out of the screen, this often sometimes feel time consuming and pointless. It also breaks the idea of becoming immersed within the game’s world, when you’re presented with a world map pointing out your location. It’s a very strange clash as the map gives an illusion of freedom but the game is explored by 2D side scrolling.

Making use of an illustrative and colourful art style, Battle of Arcadias is very similar to most JRPGs, and this means it doesn’t do much in the way of standing out against them. While it’s visually pleasing and the use of colour works great amongst its still backgrounds is contrasting to it’s dynamic stage of battling characters and cartoonish explosions, demonstrating a sense of speed and player engagement.

While there’s nothing bad to say about how good the game looks, sadly that’s all there is to it and just like ever other JRPGs the only thing that sets this game apart  from the other games to an outsider looking in, is the game’s characters, story and gameplay mechanics. While the game’s mechanics are enjoyable and simple enough to engage with, the battle sections of the game are frankly the only sections of the game that actually seemed worth playing. That’s precisely where the game’s strength lies and holds it’s only reason for true existence.

Character interaction is evident throughout the entire length of the game, and while this goes on for many to many hours, these characters did nothing worthwhile to keep me invested or even care for that matter for the end result of the game.  Will Raltz eventually man-up? I didn’t care. Will Plume progress beyond her own fantasy world of pastel coloured flowers and hearts that flow from her head? I wasn’t sure and I didn’t care enough to look forward to it.

The only thing outside of the pretty yet mediocre art style which is common at this point to games of the same genre, was it’s use of items and NPCs when engaging in battle.  Everything else outside of fight sequences felt like a drag, and I couldn’t be more grateful enough for the automatic skipping of cut-scenes, which can be set directly from the game’s option menu. 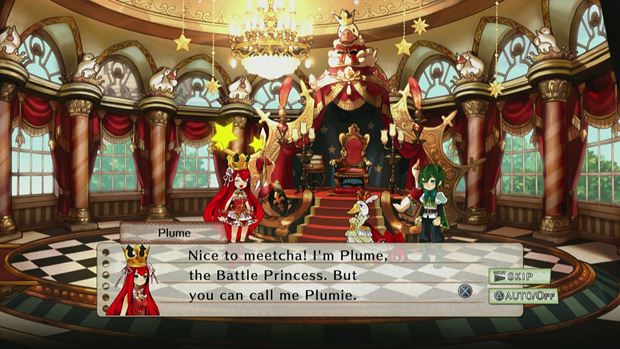 There was always an imminent feeling of ” I’ve played this before” and aside from the obvious visual traits that the game possessed it occurred to me just how bland and mediocre the game’s storyline was, with it’s use of fantasy creatures and a chosen warrior aided by an unskilled accomplice.

It’s nothing new and there’s nothing refreshing that says it’s worth anyone’s time amongst the enormous amount of JRPGs out there, other than general enjoyment for this genre of games and it’s satisfying combat system. Battle Princess of Arcadias isn’t a bad game, it just borders on a thin line of being a good one, while stumbling over to being cast as generic.

Hack 'N' Slash combat combined with team based strategy is where the Princess is at her best.

Colourful visuals and a creative art style within the game's battle stages are let down by the lack of exploration and poor use of storytelling.

While the characters are full of personality and the game's combat system is where the fun is to be held, the game would do well to break tradition and try something new most common to JRPGs.

A copy of this game was provided by developer/publisher for review purposes. Click here to know more about our Reviews Policy.
Tagged With: battle princess of arcadias, NIS America, ps3, PSN, sony