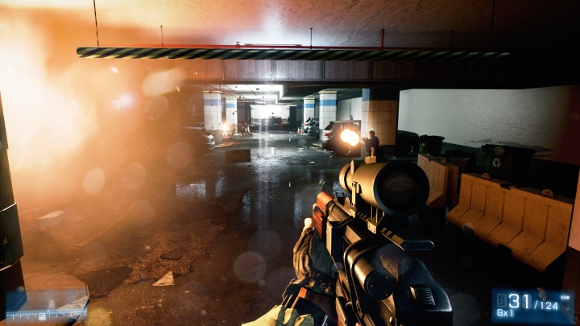 DICE has announced via Battlelog that the next patch for the PC version of Battlefield 3 will be hitting Origin on December 6. It should arrive Tuesday morning around 8 AM GMT next week. It will be a client and a server update, the former of which will be a 2GB update.

DICE explains the large size by saying that  “it contains most of the content for Back to Karkand”, which releases on PC and Xbox 360 on December 13, and a week earlier on December 6 on PS3.

DICE knows it’s not ideal to have such large downloads. The developer said: “This is not ideal, so we aim to make potential DLC content in the future as optional downloads.”

Here are the patch notes for the upcoming PC update:

Balance Tweaks:
-Fixed several weapons so they are properly suppressed and hide the player on the minimap when fired.
-Tweaked Tactical Light so it is not as blinding over longer ranges.
-Tweaked the IRNV scope so it is limited to usage only at close range.
-Reduced heat masking effectiveness of Spec Ops Camo.
-Fixed a bug where Ammo spec would give additional 40mm grenades instead of Frag spec.
-Increased the number of additional 40mm grenades from Frag spec.
-Fixed so AT mines only live for 20 seconds after a player dies to prevent infinite mines. (We want to make a different fix in the future, it’s in JIRA).
-Increased the Time to Live on sniper caliber rounds to allow extreme distance shots.
-Fixed several weapon descriptions, calibers, and fire rates. The weapons themselves have not changed.
-Fixed so the M9 and MP443 pistol can be equipped by the opposing faction when it is unlocked at 100 kills.
-Fixed Laser Guided Missiles missing their targets if the target is moving too fast.
-Reduced the effectiveness of Stealth on Air Vehicles.
-Reduced the effectiveness of Beam Scanning for Jets.
-Reduced the damage done to Armored Vehicles and Infantry from AA guns.
-Increased the damage RPGs and Tank shells do to AA vehicles.
-Slightly decreased the accuracy for all weapons on fully automatic, burst fire is now preferable at mid to long range.
-Increased the effective accuracy of long bursts for LMGs when using a bipod.
-Slightly increased the range of the 44magnum bullets.
-Increased the close range damage of 4.6x30mm and 5.7x28mm bullets.
-Increased the reload time of the Mortar from 3.5sec to 4.8sec and increased the time it takes before a shell hits the ground.
-Reduced the aimed accuracy bonus given by a Suppressor for the MP7, P90, PP2000, PP-19, and UMP45.
-Increased the range and FOV for designating targets with the SOFLAM and vehicle Laser Designators.
-Decreased the effectiveness of 12g FRAG ammo when equipped on semi-automatic and automatic shotguns.
-Slightly Increased the power of Fighter Jet Cannons against all vehicle targets, especially Helicopters.
-Decreased the power of Miniguns against Jets and Helicopters.
-Increased the power of Stingers against Jets.
-Flares reload times for Jets and Helicopter Gunners have been increased.
-Tweaked the AN94 so its burst fire better conveys the real world advantage offered by this weapon.
-Added Single Shot to the AN94 as an available fire mode.
-Slightly increased the recoil on the M416 and removed the Burst Fire mode (this weapon incorrectly had burst fire, which was not authentic).
-Tweaked the spawns for TDM on Kharg Island, Grand Bazaar, Caspian Border, Seine Crossing, Operation Firestorm, Damavand Peak and Noshahar Canals
-Moved a tank spawn in US base on Caspian Border so it would not be destroyed by a falling tree
-Tweaked the Gas station Capture area on Conquest on Caspian Border
-Tweaked the max vehicle height on Noshahar Canals

“Also, it will once again be possible to reduce the number of players required to start a round to 1 both in ranked and unranked mode,” Kalms said of this update. “We changed it back after getting a lot of negative feedback from both individuals and the RSP companies.

“Our plan is to introduce a warm-up mode, where players can move about and play the game, but with scoring disabled; then, when the number of players goes above the threshold — that’s when the real round starts.”

There’s still no word on when the Xbox 360 patch will be out. Stay tuned for updates.