Posted By Kartik Mudgal | On 10th, Feb. 2013 Under News | Follow This Author @KartikMdgl 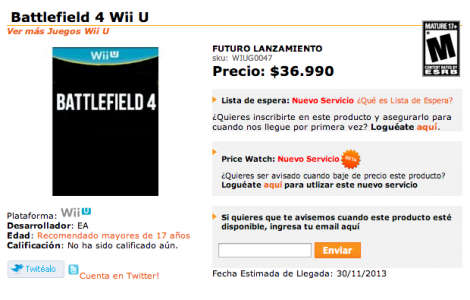 We know for a fact that Battlefield 4 has been announced indirectly and is supposed to be released this year. Information about the game is expected in about 90 days, we covered earlier.

The game was leaked via EA’s digital service Origin and later confirmed by EA, but we’ve not gotten an official press release or a trailer on the game.

A retailer has listed Battlefield 4 and Modern Warfare 4, and the latter was also confirmed by Activision as Call of Duty 13. The game will most probably be developed by Infinity Ward since the last game was developed by Treyarch.

You can check out the Activision filing here. The game has not been officially announced by Activision but it is expected to be released during the holiday season this year.

The listings were found at a Chilean retailer called Zmart, and a Wii U version is also expected for both the games.