Competing with Call of Duty 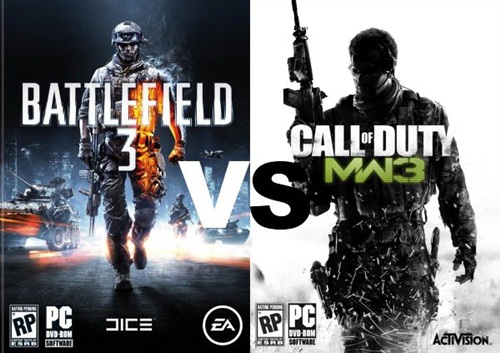 Okay, so maybe the box art was similar, but that’s no reason to put them head to head.

Call of Duty, for reasons I’m still not sure of, is one of the biggest franchises in any medium ever. Battlefield is not. Why? There is no reason in terms of quality. The only difference between the mainstream appeal of the two is best left to the in depth analysis of psychologists and economists, because the gameplay quality is high enough for the Battlefield series to justify such success levels. Rather than bitterly chasing after the dream of COD style sales though, EA just need to keep doing their on thing with the Battlefield series. Going head to head with Call of Duty (and worse yet, actively proclaiming they wish to do so in various interviews) cheapens the unique features of Battlefield and draws in an audience that are unlikely to appreciate the differences between the two FPS giants. Though it doesn’t affect the end product directly, I’d still like to see EA make some smarter marketing moves with Battlefield 4.

Though Battlefield 3 sported the new and improved second generation of DICE’s Frostbite engine, things felt a bit toned done on the destruction front. Maybe it was just the map design of Bad Company 2 sporting lots of little houses and shacks that were just ripe for collapsing with a well placed rocket, but the destructible environments of BF3 didn’t feel quite as… well, destructible. I certainly think it was a case of the levels not quite showing off this feature enough rather than the tech itself, so let’s hope we see more excuses to rip through buildings in all modes of Battlefield 4

In the publisher-crafted battle between Modern Warfare 3 and Battlefield 3, the major issue raised against EA’s military wonder boy was its frame rate. Whilst the Call of Duty series boasts of its sixty frames a second visuals, Battlefield 3, though graphically more capable than its competitor, could only boast half this amount. It was to be expected with this generation of console hardware slowly running out of steam so, should BF4 release on future hardware (as has been speculated so far), there will be no real excuse for DICE leaving it to run at 30 FPS.