Battlefield Hardline Interview: ‘We Want To Make Sure That We Deliver On People’s Expectations’

Hardline’s Creative Director Ian Milham on the mistakes of Battlefield 4, staying true to the core of the franchise and living up to expectations.

The Battlefield franchise is at an all time low. With Battlefield 4, consumer trust has been hit and EA needs to desperately repair that. With Hardline, EA took a different approach. Instead of developing a Battlefield 5, they shifted the development of the next Battlefield game to Visceral Game, the people behind the extremely popular Dead Space series. Visceral Games came up with Hardline, which breaks away from a military setting and focuses on bank robberies.

GamingBolt got in touch with Visceral Game’s creative director Ian Milham to know how they will avoid the same mistakes as DICE did with Battlefield 4 and deliver a Battlefield game that will be true to its roots. Check out his response below.

Leonid Melikhov: Tell us from a top level what has changed in Hardline? How is it different from the main Battlefield series and yet has the same feel and vibe as them?

Ian Milham: It still has all the Battlefield fundamentals – like the things that make Battlefield Battlefield. Giant maps, all the different team-play options, the tactics, the vehicles, the gadgets and all that kind of stuff, but it’s a completely new fiction and world and feel. That means, the look is different, the music is different, where the maps are located is different, all the vehicles are different and all that kind of stuff. It’s the best of both worlds, it’s the gameplay that a-lot of people are familiar with and with a-lot of innovations on top. 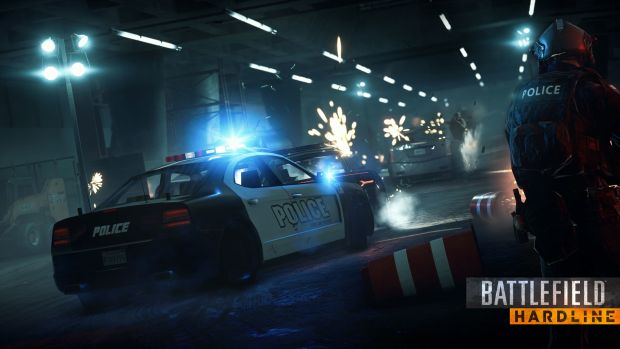 "It seems silly to even have to say it, but when you buy a game it should work, and we take pride in delivering polished finished software."

Leonid Melikhov: Can you please talk about the single player mission structure in Hardline. Is it going to take place in a vast open level or will it take across different regions?

Ian Milham: We’re presenting the single-player as a bunch of episodes. We’re not making a big open-world game, but it’s not as linear as people might be expecting,” Creative Director Ian Milham told to GamingBolt. “We want to offer lots of tactical choice within spaces and stuff like that. It’s still is a level game with and story, it’s not a broad open thing. But it’s not just a no choice roller coaster.

Leonid Melikhov: The PS4 version is already confirmed 1080p/60fps. But what about the Xbox One version?

Ian Milham: Should be the same. If you look at the games that Visceral Games has made before, we have always strive for total parity between our platforms. Of course, the PC version, it will do whatever your PC can handle, and the PlayStation 3 and Xbox 360 versions will obviously not be as high res as compared to the PlayStation 4 and Xbox One versions. But those two [PS4 and Xbox One] should be locked in together.

Leonid Melikhov: With Battlefield 4, consumer trust has been hit. How do you plan to make sure that the same mistakes are not repeated in Hardline?

Ian Milham: It seems silly to even have to say it, but when you buy a game it should work, and we take pride in delivering polished finished software. First of all, all of the work that has been done on Battlefield 4 throughout the year has all been coming along, we even did that some of that work. So a lot of that is coming along in what we are shipping as well and then we’re doing things like the beta, to let people play it, see it and also to help us create the best launch we can. 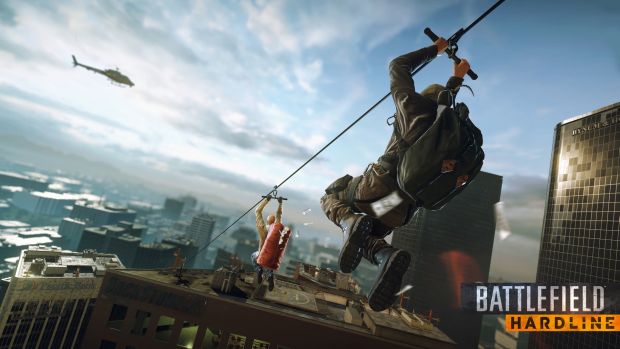 "We're using all of the power that the Frostbite 3 engine can give us along with some new things we're doing, all kinds of stuff."

Leonid Melikhov: Can you talk a bit about the multiplayer modes and how it will be different from contemporary Battlefield multiplayer?

Ian Milham: Sure. Well right now we’re showing Heist and Blood Money. One of them is all about attack/defend and counter-attack mode where the criminals are trying to break into the vault and get all the money. The other one is sort of like a dual capture the flag, expect the flag is always live and that’s Blood Money. But we’ve got a lot of things still coming that I think that is going to be pretty different for traditional Battlefield and pretty exciting.

Leonid Melikhov: I assume those things are unannounced as of now?

Leonid Melikhov:  Do you have new stuff planned to push the visuals on the PS4 and Xbox One?

Ian Milham: Well, we’re using all of the power that the Frostbite 3 engine can give us along with some new things we’re doing, all kinds of stuff.

Leonid Melikhov: What kind of skills or perks can players expect in the online components?

Ian Milham: There is a bunch of stuff planned, but I am not talking about that too much yet. 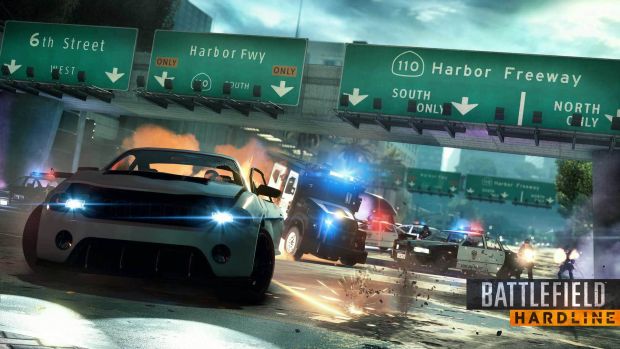 Leonid Melikhov: The most thing about Battlefield: Hardline is that it’s made by developers of Dead Space which was a really great horror franchise on the last gen. How do you guys feel about a team that’s been mostly doing third person horror stuff going into this fast paced, in your face explosions multiplayer? How did that work out for you guys?

Ian Milham: The single-player is something that’s very near and dear to our heart and we’re doing a great single-player, but we’re doing the multiplayer too. So that’s been a big learning curve. Part of what we did there is we helped out on Battlefield 3 and 4 a little-bit to get those skills going. We’ve added a bunch of people to the studio that have a lot of experience on multiplayer that some of the people have heard of for sure. Nothing to do, but keep making it, iterating and seeing how it’s going. It’s been a challenge, but a really fun one.

Leonid Melikhov:  Have you had problems with the Xbox One’s eSRAM?

Leonid Melikhov: How do you guys feel about DirectX 12?

Ian Milahm: They’re cooking up some pretty crazy stuff – the Frostbite team with the latest things. It’s always pretty impressive, we are going to try to get in every feature we can before we ship.

Leonid Melikhov: Is there anything else you wanna tell us about the game?

Ian Milham: I really think this is going to be good for both Battlefield fans and people new to the franchise. We really want to be humble about this and provide something [new]. We’ve all been Battlefield fans going back to the beginning and I know people take it very seriously and we want to make sure that we deliver on their expectations. You don’t wanna just give people the same game over that’s not very fun.