Tindalos’ Battlefleet Gothic: Armada is a game seemingly at odds with its identity but still managing its diverse personas in a deft display of combat prowess. Based on the Warhammer 40K universe, a miniature tabletop war-game, Battlefleet Gothic: Armada is balancing a lot of little nuances together into a campaign that combines real-time strategy with role-playing mechanics and tactics. It’s an odd yet visually appealing mixture which seems to stumble in its own magnanimousness. "Do you safeguard a specific sector or let it fall to the enemy to retain resources for later? It’s up to you and granted, not every decision can lead to a happy conclusion."

Battlefleet Gothic: Armada as a story is pretty straightforward so if you’re not well-versed with the Warhammer 40K universe then there’s very little to worry about. As part of the Imperium’s Imperial Fleet, you face off against the Chaos Undivided faction in a lengthy campaign. Epic music and cheesy voice acting aside, the story was actually pretty easy to get into. The various factions and their roles in the war are interesting – it creates a feeling of knowing enough to enjoy the ongoing conflict without overly inundating you with information. It’s not the most involved or cinematic caper I’ve embarked on, especially in a real-time strategy campaign, but it works for the most part without feeling tacked on.

Only the Imperial Fleet is available for playing in the campaign however. The other factions like the Orks and Craftworld Eldar (along with the aforementioned Chaos) are only accessible in Skirmish and multiplayer. In terms of fleet management, there’s a lot of nuance to Battlefleet Gothic: Armada. You start with the most basic of ships (which in the Imperium’s case means frigate-like behemoths) and are ultimately charged with upgrading them, completing objectives along the way. Mission deployments are limited per turn so you’ll need to think carefully about what you’re going to do next. Do you safeguard a specific sector or let it fall to the enemy to retain resources for later? It’s up to you and granted, not every decision can lead to a happy conclusion.

No matter what ship you have under your command, they come with a host of different abilities. Along with a decent variety in the units themselves, you have a specific set of slots for upgrading and specializing them further. As ships level up, their crew members can also be customized with different abilities, thus leading to an even deeper build. 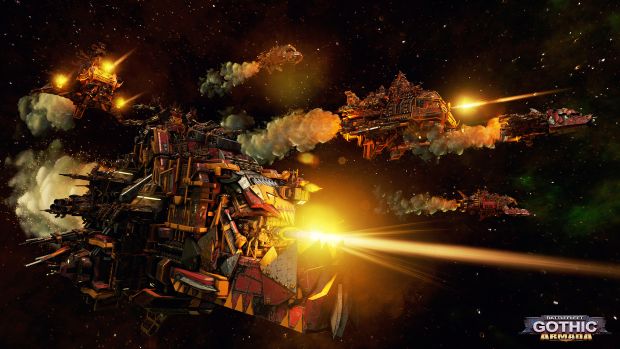 "Despite the typical story and somewhat average musical score, Battlefleet Gothic: Armada does a pretty decent job at mixing up its objectives. The problem arises with the difficulty of said objectives and the game’s punishing structure."

Ships can also be given specific orders like targeting enemies without direct input, avoiding the enemy by a certain margin and even engaging with certain types of foes. Want to target a specific section of the enemy ship? How about deciding which guns to fire in the process? Maybe send a few boarding parties for a front door greeting or two? Battlefleet Gothic: Armada offers it all. So it’s kind of strange to admit that certain battles can be slow at times. With so many options, micro-management is definitely a factor for one’s success. Heck, there’s a slow-time mode to encourage as much in the heat of battle. A lot of that micro-management involves just setting the specific orders that a unit must follow and hoping it remembers as much. It’s also hard to tell just how effective specific strategies are when it’s all said and done. In many ways, the game isn’t quite able to visualize the results of different unit builds and strategies as effectively as, say, playing a tabletop game would. Keeping the complexity of the tabletop only makes things that much more awkward.

Battlefleet Gothic: Armada‘s campaign is admittedly tough. When you get into the combat, it’s easy to see the core appeal of the game. The environments are lovingly rendered, particle effects and fevered volleys between ships are as cinematic as can be and there’s a constant feeling of tension in the air. Honestly, it’s great fun to just unleash your ships on the enemy, even with all the micro-managing and customization, and watch the spectacle unfold. In a way, Battlefleet Gothic: Armada has some of the prettiest space battles I’ve seen in a while.

Despite the typical story and somewhat average musical score, Battlefleet Gothic: Armada does a pretty decent job at mixing up its objectives. The problem arises with the difficulty of said objectives and the game’s punishing structure. When you’re cruising through missions, rendezvousing at random points, the game feels pretty fairly paced. Convey escorts are difficult as are assaulting blockades but it’s nothing overwhelming while recovering data and executing assassinations can be a nightmare. The latter two are especially dubious since you’re given a limited time to battle before the target escapes. "Battlefleet Gothic: Armada isn’t an awful game by any means. It’s just struggling at times to really translate its tabletop rules to the real-time strategy realm."

And if you lose any ships during battle? You better hope you didn’t, especially a higher level unit because it can pretty much derail your progress. Ships won’t be available for a set number of turns when destroyed so you’re encouraged to have some replacements on standby if you want to complete latter missions. It would be one thing if you had to spend an inordinate amount of resources to repair damaged ships but instead, Battlefleet Gothic: Armada seems content to handicap you for a period of time.

Skirmish is a series of randomized battles, offering control of other factions and allowing for quite the variety in how you approach the game (the Orks, for instance, can mutiny if the battle is going poorly, encouraging you to quell the mutiny). Multiplayer is a similarly pleasing affair and features both 1v1 and 2v2 play. However, it’s a bummer to have to level up separately across all three modes though, especially in Skirmish which should be reserved for quick matches.

Battlefleet Gothic: Armada isn’t an awful game by any means. It’s just struggling at times to really translate its tabletop rules to the real-time strategy realm. The visuals are great and the battles themselves can be highly entertaining. If the game had focused more on its epic space combat and improved on the narrative a bit more, Battlefleet Gothic: Armada would be easily recommended. As it stands, with its ambiguous strategies, difficult mission types and severe consequences wrapped up in a bombastic story and decent multiplayer, it ranks above average. Check out Homeworld: Deserts of Kharak instead of RTS space battles are your thing.

Great looking visuals and a fairly long campaign. Skirmish and multiplayer can be fun thanks to the compelling combat. Wide range of options for managing units and upgrading. Some mission types can be pretty fun and the story isn't a total throwaway.

Final Verdict:
GOOD
Battlefleet Gothic: Armada tries to combine the best of both worlds - tabletop strategy and RTS - and comes off a little ham-handed as a result. It can be fun but the punishing structure and difficult mission types may dissuade less hardcore strategy fans.
A copy of this game was provided by Developer/Publisher/Distributor/PR Agency for review purposes. Click here to know more about our Reviews Policy.