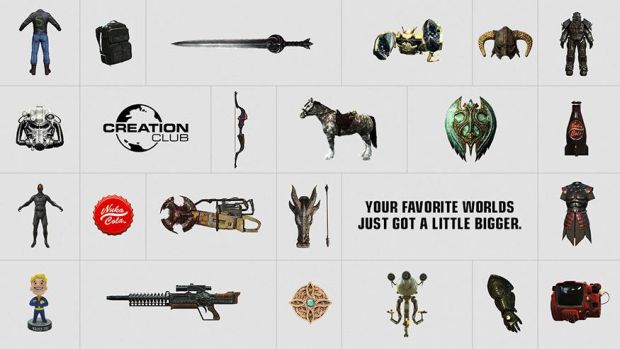 Announced at E3 2017, Bethesda’s Creation Club beta is now available for Fallout 4 with a selection of content that players can purchase for the base game. As a beta, it must be activated in Steam and downloaded manually as a separate update.

The Creation Club contains content developed by Bethesda and its partners, usually mod makers, which can be purchased with credits. These are different from other mods in that they are “fully curated and compatible with the main game, official add-ons, and achievements.” Each player gets 100 credits though more can be purchased on various digital stores.

The current slate of content includes Hellfire Power Armor, Morgan’s Space Suit from Prey, Chinese Stealth Amor and Power Horse Armor, the last one being a joke suit created from Giddyup Buttercup pieces. A new shotgun and prototype Gauss Rifle are also available along with new paint for your Power Armor and Pip-Boy. It’s also possible to purchase a backpack with more storage space and other perks.

Interestingly enough, some items can only be unlocked after completing quests while others can be crafted or directly accessed from your inventory upon purchasing. Time will tell if more wholesome DLC will be available through the Creation Club though Bethesda has insisted that older DLC cannot be retro-fitted for the store.

More information on the live release along with release on Xbox One and PS4 is still to come so stay tuned.