Beyond Good and Evil HD Announced 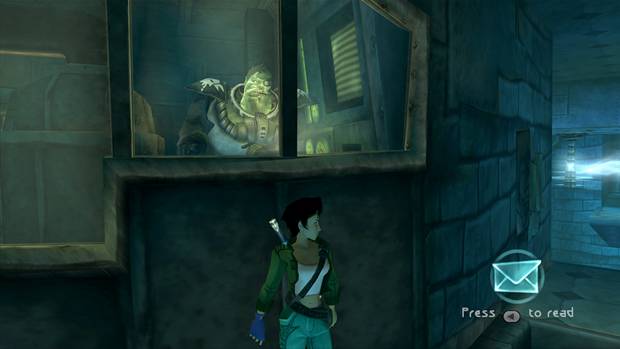 Today, Ubisoft announces that Beyond Good & Evil , the legendary, award-winning action-adventure video game, will be recreated in high definition, launching in 2011 for the Xbox LIVE & PlayStation Network. In addition to giving fans the opportunity to play the critically acclaimed game, Beyond Good & Evil HD online will allow players to unlock achievements and trophies by discovering new secrets in this masterpiece adventure game.

Originially released on Gamecube, Xbox, PS2 and PC in 2003 it was a big hit.. one of those classic games that stick with you like the Zelda franchise for instance.  The game will have updated character models, higher-resolution textures, a remastered soundtrack, leaderboards as well as Achievements and Trophies.

Featuring epic boss fights, puzzle-solving and stealth-based games, Beyond Good & Evil broke the barriers of traditional action-adventure gameplay when it was released in 2003. The story follows Jade, an investigative reporter and martial artist, who works with a resistance agency to uncover a government conspiracy and reveal their horrific secrets. As Jade, players are tasked to solve puzzles, fight enemies, and obtain photographic evidence.

Ubisoft have also released a short FAQ about the game. Check it out below:

Why did you decide to release Beyond Good & Evil on PSN and XBLA?

Although Beyond Good & Evil was released seven years ago, it continues to be one of Ubisoft’s most talked about games with a huge fan base. We know that fans are very interested in re-visiting the Beyond Good & Evil universe, and we also want to give people that might have missed the original game a chance to play it and see for themselves what all the buzz is about.

PSN and XBLA are the perfect platforms for a one-of-a-kind game like Beyond Good & Evil HD because the audience on these platforms is known for craving original and quality games at affordable prices.

What improvements are you bringing to Beyond Good & Evil HD on PSN & XBLA compared to the version that released in 2003?

Overall, we wanted to maintain the charm of the original game’s fantasy/cartoon style while bringing next-gen qualities to the HD remake.

In Beyond Good & Evil HD, we’ve redrawn many textures in the game, upgraded most character models, and improved the look of the water and shadows in the game. We also improved the overall image quality of the game with multi-sampling anti-aliasing.

In terms of audio, we were able to render the game’s excellent original soundtrack in 5.1 and in much greater quality.

Can we expect new features in the XBLA and PSN versions of the game? What is included in this version that was NOT included in the 2003 release?

We’ve added achievements, trophies and leader boards. We believe that these new features are great additions because they give the players even more reasons to spend time exploring the beautiful world and completing side-quests.

Is the game being localized?

The game is fully localized in all the main European languages, and it includes all of the original recordings.

Who is developing the game?

When will the game be released?

Beyond Good & Evil HD will be released in 2011 for PSN and XBLA.

What about BG&E 2, is there any additional information you can share?

BG&E 2 is currently in development at Ubisoft Montpellier. We have not specified a release date but as soon as more information on the title is available, we’ll make sure to let you know.