Bionic Commando is a direct sequel to Bionic Commando: Rearmed released on the Playstation Network and Xbox Live. The game is developed and published by Capcom im collaboration with Grin studios. So in the game you take the role of Nathan Spencer who has lost one of his arms. Spencer has been wrongly accused and prisioned and has been stripped of his bionic arm, but before his excution could take place Ascension City is bombed by a radioactive earthquake which wipes out the entire population. Given Spencer’s recent record of his heroics he’s freed by the government, only under one condition through. He must fight against the a pro bionic terrorist group known as “BioReign”. Super Joe who was the protagonist in the original games now returns as commanding officer of Spencer in the game. The game revolves around Spencer’s missing wife Emily who disapppeared when Spencer lost his arm. Super Joe knows the location of his wife but in turn he wants Spencer to retrieve a mass weapon, so that Super Joe can used them against the terrorists. In the end Spencer just becomes a pawn and realizes that hes just being used by his commanding officer. The overall plot of Bionic Commando has been very well done and the story of Nathan Spencer is told very well indeed. 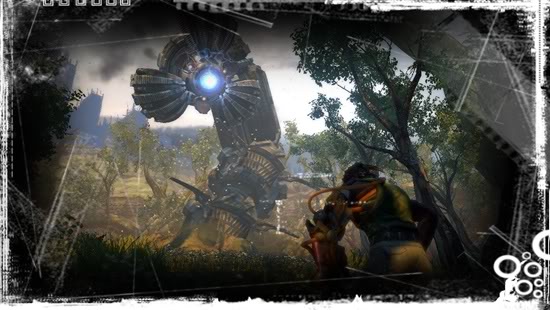 When the player will start off with the game the protagonist will be without his bionic arm. During the initial stages the player will have his semi automatic gun. After the player progresses through the story the player will finally get hold of the bionic arm. Now the developers have been pretty smart in making that piece of euqipment pretty unique. Obviously you will be able to swing around with it. The bionic arm can just about attach itself to any surface. On more than one occasions the player has to use his bionic arms to get across certain difficult portions of the game. The bionic arm is often used for turn by turn swinging which requires proper timing of the trigger buttons. Enough said about swinging. The unique thing about bionic arm is that you can just lift any heavy objects with it. You will be able to get hold of you enemies so that you bring them to you instead of you going to them. You will be able to get hold of the weapons and ammunition that are laid around while fighting just by using your arm even if they are pretty far. There are two special moves associated with the euqipment. The first which enables Spencer to kick an object, jump and apply force to it and take out chunk of enemies together. The other is where the Spencer uses his bionic arm to get hold of objects, elevate them in the air and throw them in the desired direction. These moves are most helpful when you have to take down a group of enemies or the flying bionics. Spencer will be having a pretty decent amount of arms and ammunition at his disposal. The player will be able to carry three weapons, primary is the one which i described above in my review. The secondary weapons vary from sniper rifles, cannons, missile launchers and shotguns. The third one are the grenades which again can be used to take out a number of enemies together. The variety of enemies found in the game are limited but their AI is just about right. You will be facing the standard Bio reign soliders which you can take care of by using your primary weapon, but later on flying bionics will make things a bit tougher. Having said that Bionic Commando is a pretty easy game and players should be able to finish this game in about 10-12 hours. The controls are pretty neat but sometimes they behave akwardly specially when i am scaling buildings and towers. There are few boss fights. There is nothing spectucular about them but they are just there to add more gameplay value. Capcom have pretty much nailed with their gameplay here as is expected with them. 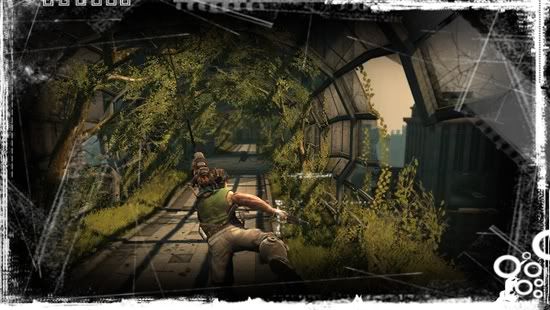 Bionic Commando is a beautiful game to look right from the onset. The Ascension City is shown to be totally destroyed by radioactive earth quake and the developers have done a great job of representing it in that way. The sense of scale is huge in the game. And that is kind of expected from a free swinging game. Having said that, eventhough bionic commando might look as its a open sandbox game, but it isn’t. You will be able to climb huge towers and literally go anywhere but the design of the levels is in such a way that you will always reach your waypoint. The cut in scenes are in game and hava nice touch to them. This really looks like a well polished game. Spencer will be going to different location in Ascension City as you progress through the game and the aamount of details and lighting effects are pretty top notch. Character animations are very good for most part, however lip sync isnt that great always. If the visuals are something that shoukd drop your jaws, the sound in the game, sadly is not up to the standards. The music though is sometimes every arcade-ish, doesnt match the ambience very well. During the boss fights where music is epexcted to be a bit intense the music turns relaxing. The music is one of the area where the game fells behind. Voice acting is superb to be honest. Nathan Spencer is voiced by Mike Patton who had his first major success as lead singer in the Rock band Faith No More. Other characters including Mag and Super Joe are voiced pretty well.

Bionic Commando is perhaps a game that will draw many comparisions with popular platforming games like Prince of Persia. No its isn’t like that game. Bionic Coammando is pretty unqiue in its ownself. With its enaging storyline and its somewhat funny but a serious protagonist Capcom has just nailed it again with its new game. With a great sense of scale and with a great equipment in the bionic arm, there’s plenty of fun to be had with Bionic Commando.

Final Verdict:
SUPERB
Capcom has nailed it again with Bionic Commando.
A copy of this game was provided by Developer/Publisher/Distributor/PR Agency for review purposes. Click here to know more about our Reviews Policy.